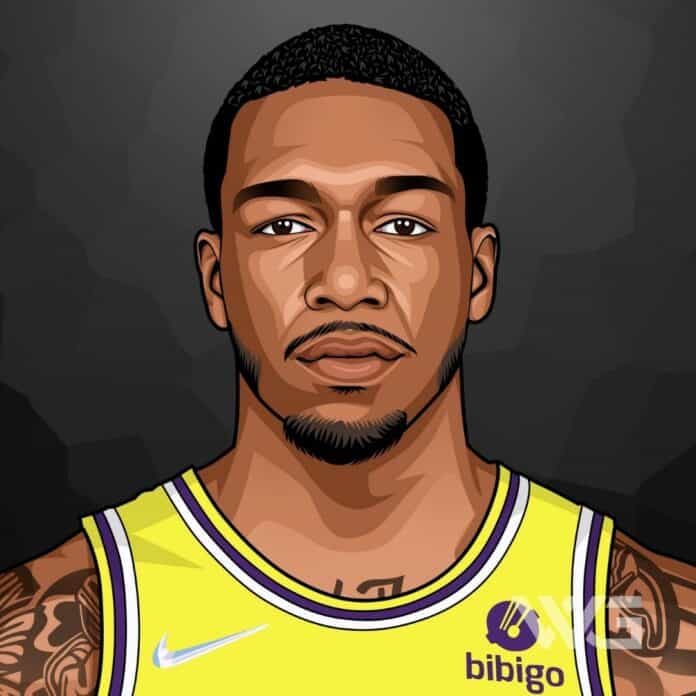 What is Kendrick Nunn’s net worth?

Kendrick Nunn is an American professional basketball player who is currently a point guard for the NBA’s Los Angeles Lakers.

Nunn went undrafted in the 2018 NBA Draft after spending his college career with the University of Illinois and Oakland University.

As of February 2023, Kendrick Nunn’s net worth is estimated to be $9 Million.

Nunn was a standout high school player in the Chicago area, and received several scholarship offers from colleges that included Ohio State and UCLA.

He opted to stay in-state and attend the University of Illinois, but was dismissed from the team due to his misdemeanor battery arrest and transferred to Oakland University in Michigan.

Nunn was known for his three-point shooting in college, but still wasn’t selected in the 2018 NBA Draft.

Nunn still knew he could make it into the NBA, and signed with the G League Santa Cruz Warriors to start his professional career.

He got off to a hot start in the G League and averaged nearly 20 points per game during his one season with Santa Cruz.

Nunn impressed NBA teams enough to receive contract offers, and he ultimately signed with the Miami Heat where he played for two seasons.

After becoming a free agent in 2021, Nunn signed a two-year deal with the Los Angeles Lakers, but missed the first season of his contract due to a knee injury.

Nunn would recover from his injury and was entered into the Lakers rotation for the 2022-23 campaign and is looking to make another impression with another contract coming after the season.

Unfortunately, a knee injury caused Nunn to be sidelined and perhaps took away from his potential earnings, but he still has plenty of time to recover.

The figures of Kendrick Nunn’s earnings are based on his publicly announced contracts, but are not guaranteed to be 100% accurate.

Nunn is in the final year of his two-year contract with the Los Angeles Lakers after he exercised his player option for the 2022-23 season.

It will be tough to say how much Nunn will get with his next contract, as he’s still recovering from the knee injury that caused him to sit out for an entire season.

Kendrick Nunn was making just enough to get by while his professional basketball career was starting, earning less than the average American.

Things would change for Nunn when he broke into the NBA, though, and is now earning millions per year.

The figures of Kendrick Nunn’s net worth are estimated in regard to his NBA salaries and endorsements and are not guaranteed to be 100% accurate.

Here’s a breakdown of Kendrick Nunn’s annual net worth:

Nunn’s net worth took a few years to start building, but he’s now earning enough money to stash away for years to come.

As Nunn continues to improve and get some years in the NBA under his belt, his net worth will undoubtedly grow, too.

Kendrick Nunn is the son of Kimberly Harris and Melvin Nunn, and was raised alongside his sister Kendyl by his father.

Nunn is a father himself as he has a son named Kyren that was born in 2017 from a previous relationship and has raised Kyren mostly himself.

There have been multiple relationships for Nunn during his professional career, including with model Blen Kiya, who is now pregnant with his child.

Kendrick Nunn has been receiving accolades for his on-court performance since high school, having his jersey number retired while still playing.

Nunn has been able to rack up a lot of individual accolades ever since then, including his two stops in college.

Here are some of the awards and achievements from Kendrick Nunn’s career:

Nunn has been a great contributor on the basketball court at all levels and continues to be with his second NBA team.

There should be plenty more opportunities for Nunn to earn more individual awards, though the big prize he’s looking for is an NBA Championship.

How Does Kendrick Nunn Spend His Money?

Kendrick Nunn is hoping to one day find himself on the list of richest NBA players in the world, and could do that if he continues to produce at a high rate.

As for now, Nunn doesn’t have one of the most expensive cars in the world, hoping to add to his net worth before any flashy spending.

While he’s setting his sights on a higher salary, Nunn is avoiding the most expensive houses in the world and instead living in apartments for now.

Nunn is focused on spending money on his family, as well as charity, as he supports BAPS Charities and the Dovetail Project to support single fathers.

The highlights in the career of Kendrick Nunn date back to his early high school days when he was one of the best players in Chicago.

Since then, Nunn has made several stops and has accomplished a lot at the college and professional levels of play.

Here are some of the best highlights of Kendrick Nunn’s career:

Nunn got off to a great start in his NBA career with the Miami Heat and hopes to bring yet another title to the Los Angeles Lakers.

While a knee injury took him out for a season, Nunn is off to a good start in his recovery and contributing with LeBron James to the Lakers stat sheet.

Kendrick Nunn has always been able to say what’s on his mind when it comes to his basketball career, and has shown a lot of confidence.

Though sometimes he’s gotten some backlash from players like Ja Morant for his soundbites, Nunn still isn’t shy when it comes to the media.

Here are our favorite quotes from Kendrick Nunn:

Kendrick Nunn was tabbed as a potentially great NBA player from a young age, and has lived his life under a microscope since high school.

During his college years, Nunn ran into legal trouble and has had to recover, while also recovering from a knee injury as a professional player.

Now that you know all about Kendrick Nunn’s net worth, there is a lot to learn from the player that has had to correct his mistakes to get back into basketball.

Here are some of the best success lessons to learn from Kendrick Nunn:

A lot of people believe that you can only get better with experience, but Nunn knows that simply watching can be just as good.

Every time that he’s on the bench, Nunn is making sure that he’s analyzing what’s happening in front of him and using it for when his number is called.

Sitting on the sidelines isn’t just a time to grab water and a quick breath, but is also a learning opportunity for players.

2. Have A Strong Support System

Kendrick Nunn’s mother wasn’t around much when he was growing up, and was raised almost exclusively by his father.

Simply having his father around was a big deal for Nunn, as he was able to lean on his dad when times were tough both on and off the court.

Nunn credits his father for helping him to get where he is, and is now showing his support for single father around the United States.

After getting into legal trouble while in college, that could have been the end of Kendrick Nunn’s basketball career.

Instead, he collected himself after departing Illinois and went to a smaller school to refocus and get back on track.

Though he didn’t get drafted, Nunn knew his abilities would eventually shine, and he learned from his mistakes to make it into the NBA.

Kendrick Nunn is currently in the prime years of his career, and his playing time should increase as he continues to recover from the knee injury that kept him out for a season.

Nunn seemed like he might not be destined for the NBA after the fallout from his time at the University of Illinois, but he’s worked hard to get where he is now.

During his time with the Lakers, Nunn should get plenty of opportunities on the court as he hopes to help the team win yet another NBA Championship.

As of February 2023, Kendrick Nunn’s net worth is estimated to be $9 Million.

What do you think about Kendrick Nunn’s net worth? Leave a comment below.