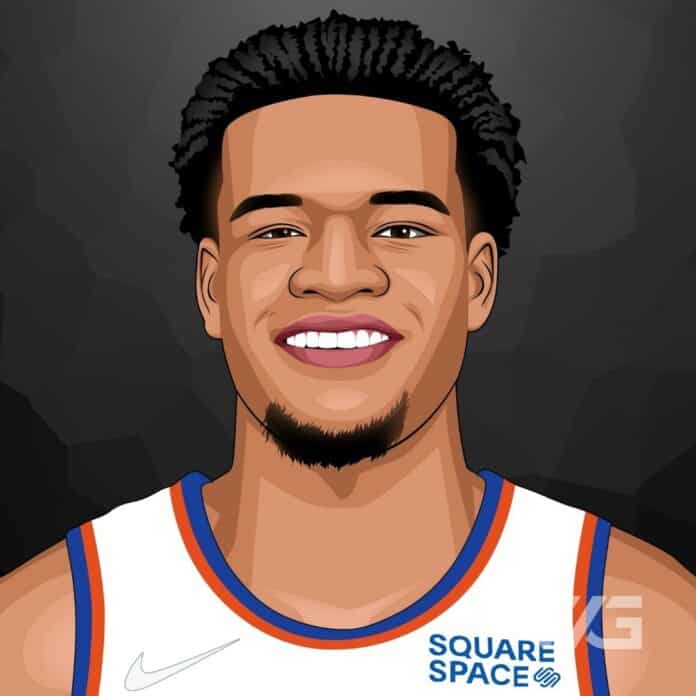 What is Kevin Knox II’s net worth?

Kevin Devon Knox II started his professional career in 2018 when he was drafted by the New York Knicks.

Today, he is a member of the Detroit Pistons and has earned the nickname “Fort Knox” from his fans.

He is an increasingly popular player, and we highly expect to see much more from him in the future as he continues his professional career.

Kevin Knox II was born August 11, 1999, in Phoenix, Arizona, to former NFL receiver Kevin Knox, but his family later moved to Florida when he was a child.

Growing up, he attended Tampa Catholic High School, where, as a junior, he averaged 30 points, 11 rebounds, and 2 assists.

He was ranked as a five-star recruit during his senior year and opted to commit to the University of Kentucky, turning down offers from Duke, Missouri, North Carolina, and Duke.

During the freshman season of his college basketball career, he led his team to a 10-8 conference record, averaging 15 points per game.

He was named to the All-Rookie and First Team All-SEC teams but ultimately decided to declare himself for the 2018 NBA draft, forging his last three years of college eligibility.

Kevin Knox II was selected by the New York Knicks as their ninth overall pick in 2018, and he made his debut in October during a match against the Atlanta Hawks, where he earned 10 points, two steals, and a single block.

Just two days later, he scored a team-high 17 points and six rebounds in a 105-107 loss to the Brooklyn Nets.

In January 2019, he was named the Eastern Conference NBA Rookie of the Month, and the same month scored a career-high 31 points, seven rebounds, and two steals.

The New York Knicks traded Knox to the Atlanta Hawks in January 2022 in exchange for Cam Reddish and Solomon Hill.

However, he didn’t stay with the Hawks for long and officially signed with the Detroit Pistons in August of 2022.

Kevin Knox may not be as wealthy as Carmelo Anthony or DeMar DeRozen, but he has certainly done well for himself overall.

While he isn’t one of the highest-paid players on the court, his annual salary is impressive, considering he’s only been playing for a couple of years.

While we don’t know what the future will bring for his average salary earnings, it is likely we will see them increase due to his skills.

He may even become one of the richest NBA players in the world if he chooses to continue his career and not retire early.

While Kevin Knoxx II is quickly becoming one of the most popular players in the NBA, not much is known about his personal life.

However, he is incredibly active on his social media account, and on his official Instagram account, he frequently posts pictures from his games and from photo shoots.

He can also be found on his official Twitter account, where he interacts with his fans and comments on news in the sports world.

You can also stay up-to-date on Knox via his official NBA page, which lists all of his stats, upcoming games, and important news about his career.

Like Dikembe Mutombo and Vinnie Johnson, Kevin Knox has earned many honors and accolades during his career in the NBA.

However, while all of the awards he’s won are impressive, we’ve chosen some of the most significant to highlight.

Here are some of Kevin Knox II’s most important awards and career honors:

While these are only a few of his greatest accomplishments, they are the ones that have been the most important.

As he continues his career, he may very well become more distinguished than Al Horford or DeAndre Jordan in the near future.

How Does Kevin Knox II Spend His Money?

While there isn’t a lot of information about how Kevin Knox spends his money, we do know a little bit about how he has used his fortune.

In May 2022, Kevin Knox donated $2 million to his former high school, Tampa Catholic, which was used to completely renovate their new sports fieldhouse.

This donation meant a lot to him since his younger brother, Karter Knox, is currently attending school there and is set to graduate in 2024.

Outside of his generosity, he likes to keep his spending under wraps, though we wouldn’t doubt that he’s got some of the most expensive sneakers ever made stashed in his closet.

However, we’ve chosen a few of his greatest milestones to highlight, as they are the ones that have impacted his career the most.

Here are some of the best highlights of Kevin Knox II’s career:

His career may not be as distinguished as Kevin Love’s or Paul George’s, but in a few years, he may soon surpass them.

While these highlights are only a few from his career thus far, they are the ones that have had the greatest effect on his fame and fortune overall.

Kevin Knox has learned a lot during his professional career that has helped make him a better player.

Not only has he mastered staying calm under pressure, but he knows how to pick himself up when he loses or falls short.

Here are our favorite quotes from Kevin Knox II:

There is a lot that we can learn from Kevin Knox and his career as a professional basketball player.

Now that you know all about Kevin Knox II’s net worth, we can take a closer look at what he can teach us about reaching our own goals.

Here are some of the best success lessons to learn from Kevin Knox II:

1. Be Prepared To Fail

The most successful people in the world have failed at least once, and most much more than that.

However, it isn’t the number of times that you fall short that matters; it is how you pick yourself back up and try again and again.

You’re not going to build sustainable success by being a one-trick pony, which is why you need to push yourself to develop other skills.

This doesn’t mean you need to be a jack of all trades, but you should have at least a couple of skills that you have mastered well enough to make you stand out.

3. Get Comfortable Working Under Pressure

Success comes with a lot of pressure, and you’re going to have to get used to staying calm and working under it.

This is something that will take time to get used to, so don’t beat yourself up if you’re not immediately able to remain as calm as you’d like.

Kevin Knox II has made a fortune as one of the best up-and-coming power forwards in the NBA, and he is just getting started.

Between his skills and growing popularity, the future is looking very bright for this professional basketball star, and we’re eager to see where his career goes next.

Make sure to check back often so that you won’t miss any important updates impacting Knox’s ongoing career and growing fortune.

What do you think about Kevin Knox II’s net worth? Leave a comment below.