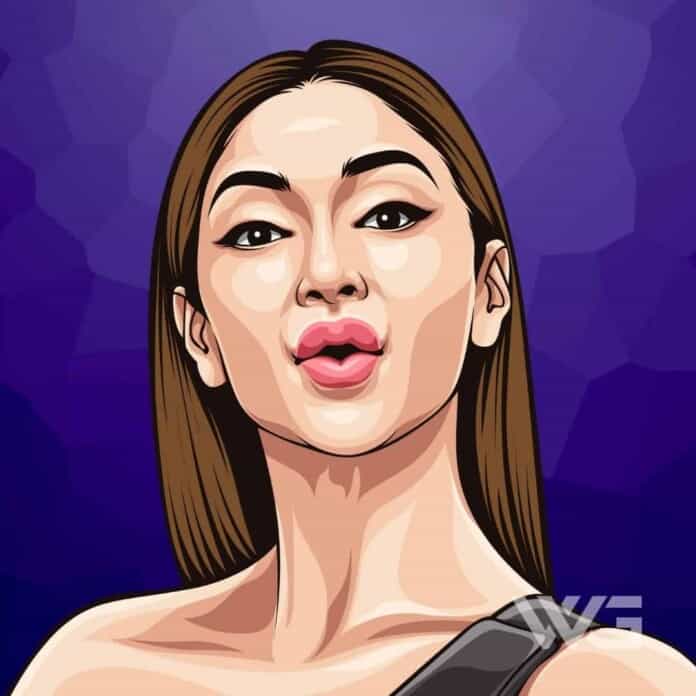 What is Nicole Scherzinger’s net worth?

As of November 2022, Nicole Scherzinger’s net worth is estimated to be roughly $14 Million.

Nicole Scherzinger is an American singer, songwriter, dancer, actress, and television personality from Honolulu. Scherzinger rose to fame as the lead singer of the Pussycat Dolls and released the albums ‘PCD’ ‘ and ‘Doll Domination’ becoming one of the world’s best-selling girl groups of all time.

Nicole Prascovia Elikolani Valiente was born on the 29th of June, 1978, in Honolulu, Hawaii. Valiente is the daughter of Alfonso Valiente and Rosemary Elikolani. Her parents separated while she was still a baby. Her mother later married Gary Scherzinger, whose surname Nicole eventually adopted.

She was inspired to become a singer after she received a cassette tape of Whitney Houston. She attended the Youth Performing Arts School at DuPont Manual High School.

Scherzinger began her career when she was hired by the popular band ‘Days of the New’. She made contributions to the group’s second self-titled album. She eventually quit the band and auditioned for the reality TV show ‘Popstars’. Later, she joined the all-girl group ‘Eden’s Crush’.

Later she joined another all-girl band named ‘The Pussycat Dolls’. The group’s debut album ‘PCD’ was released in September 2005. It included hit singles such as ‘Don’t Cha’ and ‘Wait a Minute’. Debuting at number five on the US Billboard 200, the album became a huge commercial success and has sold over seven million copies worldwide.

The following year, Nicole Scherzinger released her debut solo album ‘Killer Love’. The album peaked at an eighth position at the UK albums. With hit singles such as ‘Poison’, ‘Don’t Hold Your Breath’ and ‘Right There’.

Her next album ‘Big Fat Lie,’ which released in 2014, was also a moderate success. It included singles such as ‘Your Love’, ‘On the Rocks’, and ‘Girl with a Diamond Heart’. It received mostly mixed reviews.

As of November 2022, Nicole Scherzinger’s net worth is $14 Million.

Here are some of the best highlights of Nicole Scherzinger’s career:

“I definitely have the eye of the tiger. I’ve fought my way to where I am and will continue to do so. I’m a hard worker – I get it from my family. We only know work. Nothing was handed to us. When I believe in something, I go after it. It’s very hard to tell me no.” – Nicole Scherzinger

“I always feel like I’m rehearsing. I’m a workaholic. But you’ve got to let go and trust and enjoy! I’m a real perfectionist. It’s probably my biggest disadvantage. But as long as I can go out there, trust in the work and just have fun, that’s what matters.” – Nicole Scherzinger

“Girl power is about loving yourself and having confidence and strength from within, so even if you’re not wearing a sexy outfit, you feel sexy. That sexy stuff just happened to be part of our wardrobe, and its fun. Not all of our wardrobe is like that, but it is part of the performance and the show. It takes a woman who knows herself to be able to work an outfit like that.” – Nicole Scherzinger

“It just seemed fitting to have our own lounge with our own dance review that paid homage to where The Pussycat Dolls originated, … So it wasn’t just another nightclub. It was somewhere where people can go and see an old school show with real dancing and really performing and real singing. It’s perfect for Vegas. It’s got that whole cabaret, burlesque-inspired review of dancing, and the whole fishnets, and boas.” – Nicole Scherzinger

Now that you know all about Nicole Scherzinger’s net worth, and how she achieved success; let’s take a look at some of the best lessons we can learn from her:

1. Do What You Can For Other People

This is an important life lesson from a renowned inspirational leader. When was the last time you did something for another person without expecting anything in return? Love and compassion for our fellow human beings are some things we can practice every day. Even if it’s just something small, you’re making the world a better place.

No matter what happens in life, you should always keep moving forward.

3. Be True to Yourself

How much is Nicole Scherzinger worth?

Nicole Scherzinger’s net worth is estimated to be $14 Million.

How old is Nicole Scherzinger?

How tall is Nicole Scherzinger?

Nicole Scherzinger gained fame as a participant in the reality TV show ‘Popstars’. She later became the lead singer of the musical group ‘Pussycat Dolls’ which eventually became one of the world’s most popular and best selling girl groups. She has also appeared in films such as ‘Men in Black 3’, and ‘Moana’.

As of November 2022, Nicole Scherzinger’s net worth is $14 Million.

What do you think about Nicole Scherzinger’s net worth? Leave a comment below.

What is Stipe Miocic's net worth? Introduction  As of ,...