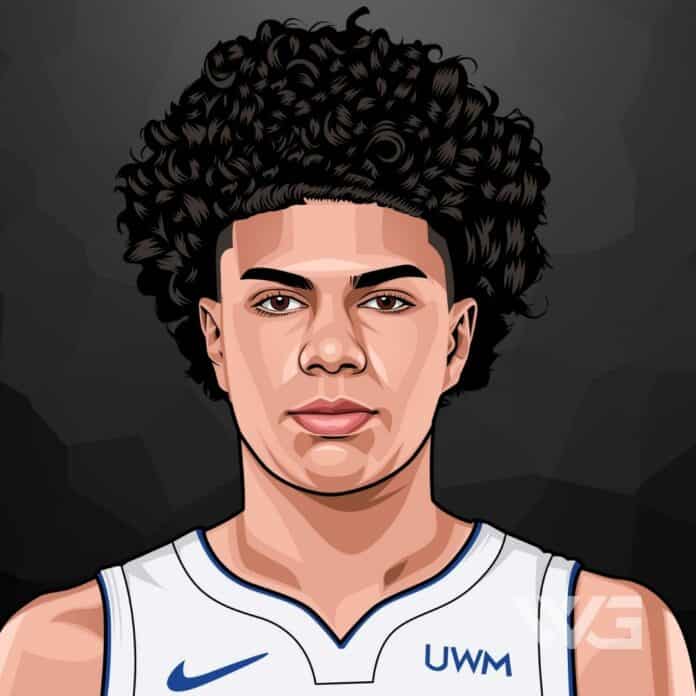 What is Killian Hayes’ net worth?

Killian Deron Antron Hayes currently serves as a point guard for the Detroit Pistons, having been drafted by them in 2020.

Before joining the NBA, he played for professional teams in France, where he made a name for himself as one of the league’s best players.

As a member of the Detroit Pistons, he has continued to stand out on the court, growing his wealth as his career progresses.

Killian Deron Antron Hayes was born July 27, 2001, in Lakeland, Florida, to Sandrine and DeRon Hayes, who was playing for the American Basketball Association at the time.

A year after he was born, his family moved to Cholet, France, where his father played in the LNB Pro A, the country’s top league.

Growing up with a professional basketball player for a father, Killian started playing from a young age, eventually joining the Cholet Basket as a youth player.

He later began playing for the Espoirs Cholet in LNB Espoirs, where he averaged 4 points and 2 assists per game.

In 2017, he was named the league MVP after he helped his team win the Trophy of the Future.

He started his professional career in October 2017 on the Cholet senior team, and a year later, he was the second-youngest participant at the NBA All-Star Weekend in Los Angeles.

Before the 2018-19 season, he signed a three-year contract with Cholet but ended up leaving in 2019 to join the German team, Ratiopharm Ulm.

With Ulm, he recorded his first career double-double, followed by a then career-high 24 points scored in a game.

The same season, he became the second-youngest player to earn a double-double during the Eurocup game before everything was suspended due to the pandemic.

After returning to his family in Lakeland, California, he entered the 2020 NBA draft and was selected seventh overall by the Detroit Pistons.

Unfortunately, shortly after joining the Pistons, he suffered from a hip injury that was later diagnosed as a labral tear, which forced him to sit out for two months.

However, once back in the game, he recorded a season-high 11 assists and 21 points.

Far from being considered one of the richest athletes in the world, Killian Hayes’ fortune is still in its infancy.

However, since joining the NBA, his salary has seen a steep increase, and it won’t be long until he is one of the wealthiest players on the court.

Since his salary has been steadily increasing, his overall net worth has seen a massive boost.

It seems likely that he will catch up to Gilbert Arenas in a couple of seasons, potentially even becoming one of the richest NBA players in the world by the end of his career.

While his career on the court is incredibly well-known, Killian Hayes has kept his private life under wraps.

On his official Instagram account, he posts largely about his career and promotional pieces he’s done for endorsements.

He can also be found on his official Twitter account, though he hasn’t posted anything for two years since being signed by the Pistons.

That said, as his career continues, we expect that he will return to social media in order to interact with his fans and keep them updated.

We will also be sure to keep you updated should any information about his personal life become available to the public!

Killian Hayes hasn’t won as many awards as David Robinson or DeMar DeRozan, but he has still earned some impressive distinctions.

Each of his accomplishments has helped him stand out from other players on the court and has boosted his renown in the sport.

Here are some of Killian Hayes’ greatest career awards and achievements:

Although these are the only awards he has won during his career, they are significant winnings overall.

As he continues his career, we expect to see him pick up many more distinctions for his talents as a professional basketball player.

How Does Killian Hayes Spend His Money?

While Killian Hayes has received a lot of publicity on the court, not much is known about how he spends his newfound wealth.

Overall, Hayes tends to keep a low profile when he isn’t playing, so fans have had to speculate about his lavish lifestyle.

Seeing as he is now playing for the Detroit Pistons in the once-automobile capital of the world, it seems likely he may have invested in some pricey cars.

While nothing has been confirmed, we wouldn’t be surprised to see him riding around in one of the most expensive cars in the world in the near future.

Be sure to check back often because if any concrete information becomes available about his spending habits, we will be the first to let you know.

Like Chris Middleton and Dirk Nowitzki, Killian Hayes has experienced many memorable moments during his career.

However, some of his greatest milestones stand out more due to their overall impact on his fame and fortune.

Here are some of the best highlights of Killian Hayes’ career:

Although these are only a few of his greatest achievements, they are the ones that have influenced his career the most.

If he continues playing professionally, we will certainly see him accomplish much more, potentially even playing for one of the richest NBA teams in the future.

There is a lot that we can learn from Killian Hayes and his career as a professional basketball player.

Now that you know all about Killian Hayes’ net worth, we can take a look at what he can teach us about reaching our own goals.

Here are some of the best success lessons to learn from Killian Hayes:

If you want to be successful, you’re going to have to work hard, but it is also important that you take time to have fun.

You definitely don’t want to get burned out before you’re able to reach your goals, so making time to relax and blow off steam is essential.

No matter what you do, you should always give it your all, because anything worth doing is worth doing well.

It won’t always be easy, but it will be worth it as you make tangible progress toward your goals and are able to reach new levels of success in your career.

3. Rely On Your Team

You won’t always be able to handle everything on your own, which is why surrounding yourself with people who can support you is important.

Having a support network can also be great for preventing burnout, because you’ll have people to help you carry your burdens.

Killian Hayes is quickly becoming one of the most popular NBA players in the world, and he’s already made a fortune from his talents on the court.

As he continues his professional basketball career, he is sure to become even more well-known and wealthy.

Make sure to check back often so that you won’t miss any updates on Hayes’ ongoing career and growing fortune.

What do you think about Killian Hayes’ net worth? Leave a comment below.