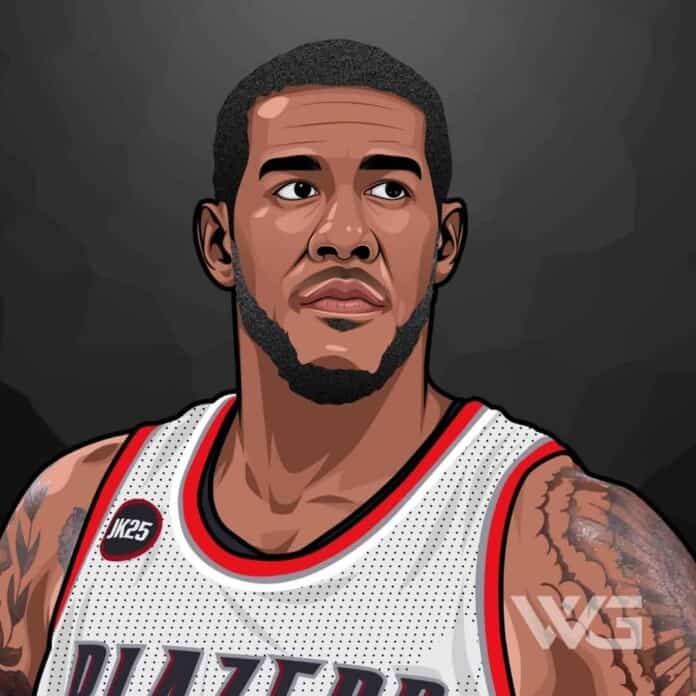 What is LaMarcus Aldridge’s net worth?

He played for the San Antonio Spurs of the NBA before transferring to the Brooklyn Nets on March 28, 2021.

In 2006, Aldridge was selected as the second overall pick NBA draft. After spending nine seasons with the Portland Trail Blazers, he signed with the Spurs in 2015.

His tenure in Brooklyn was short-lived. Just two weeks after signing with the Nets, Aldridge announced his retirement from basketball due to a health scare involving an irregular heartbeat.

As of December 2022, LaMarcus Aldridge’s net worth is estimated to be $40 Million.

LaMarcus Nurae Aldridge was born on the 19th of July, 1985, in Dallas.

Aldridge attended Seagoville High School, where he became a second-team Parade All-American and Texas Association of Basketball Coaches Class 4A Player of the Year.

Considered a five-star recruit by Rivals.com, Aldridge was listed as the No. 4 center and the No. 16 player nationwide in 2004. Aldridge attended the University of Texas at Austin.

He declared for the 2004 NBA draft but ultimately withdrew his name. According to one report.

Aldridge was drafted second overall in the 2006 NBA draft by the Chicago Bulls, only to have his rights traded to the Portland Trail Blazers for their pick, Tyrus Thomas and Viktor Khryapa, shortly after.

In 2012, Aldridge recorded a career-high eight assists in an 87-95 loss to the Atlanta Hawks. In 2013, Aldridge was named an All-Star for the second time in his career.

He signed a four-year, $80 million contract with the San Antonio Spurs in 2015. Upon being acquired by the Spurs, Aldridge was granted the number 12 jersey despite retiring for Bruce Bowen.

The Spurs eliminated the Houston Rockets in 2017 with a 114–75 victory in Game 6 of their second-round playoff series behind a season-high 34 points from Aldridge. He also became the first Spur to score 34 points with 12 rebounds in a playoff game since Tim Duncan against the Phoenix Suns in 2008.

In 2020 – 21, Aldridge missed eight of San Antonio’s final 11 games before the NBA All-Star break due to hip and quadriceps injuries. They were 6–2 in the games that he missed. He was a reserve in the three games that he did play.

As of December 2022, LaMarcus Aldridge’s net worth is estimated to be roughly $40 Million.

Here are some of the best highlights of LaMarcus Aldridge’s career:

“I’m a fighter. So if you’re going to doubt me or say that I can’t do something, I’m going to prove to you I can do it. And when I do it, hopefully, I earn your respect, and you’ll know it didn’t come easy to me.” – LaMarcus Aldridge

“I feel like half the battle is not giving up and staying positive. If you don’t have anyone in your corner or anyone in your ear, being positive helps you believe that you can get through it.” – LaMarcus Aldridge

“I grew up in low-income areas, and I’ve seen people take negative energy and accept it. They give in and end up living a pretty rough life. At a young age, I just knew I wasn’t going to give in because I didn’t want to end up being one of those people in the neighborhood that didn’t have anything and lived a hard life.” – LaMarcus Aldridge

“I take pride in just knowing how to do things. Whenever a coach tells me to do something, I always try to do it the way he said or do it to my best ability.” – LaMarcus Aldridge

“The best part about being a Blazer is the fans. The fans here are so loyal it feels like a college team with how close the fans and players are. They have such a great passion for the team that it makes it fun to be a part of and makes you want to work harder to make the team successful.” – LaMarcus Aldridge

Now that you know all about LaMarcus Aldridge’s net worth and how he achieved success; let’s take a look at some of the lessons we can learn from him:

A champion is defined not by their wins but by how they can recover when they fall.

2. The Things We Care About

Motivation comes from working on things we care about.

Keep your face always toward the sunshine, and shadows will fall behind you.

How much is LaMarcus Aldridge worth?

LaMarcus Aldridge’s net worth is estimated to be $40 Million.

How old is LaMarcus Aldridge?

How tall is LaMarcus Aldridge?

LaMarcus Aldridge is an American professional basketball player who played at the University of Texas and was declared for the 2004 NBA Draft before withdrawing.

What do you think about LaMarcus Aldridge’s net worth? Leave a comment below.