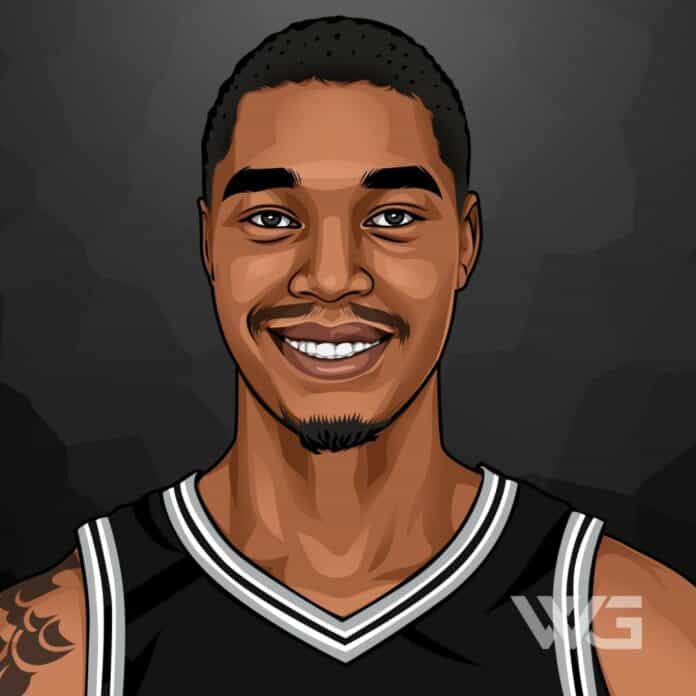 What is Lonnie Walker IV’s net worth?

Lonnie Walker IV is an American professional basketball player who is currently a shooting guard and small forward for the NBA’s Los Angeles Lakers.

Walker was the 18th overall selection in the 2018 NBA Draft after spending his college career with the University of Miami.

As of January 2023, Lonnie Walker IV’s net worth is estimated to be $9 Million.

Lonnie Walker IV was born December 14, 1998 in Reading, Pennsylvania and grew up in the city.

During his high school career, Walker was named Mr. Pennsylvania Basketball in his senior year, as well as a McDonald’s All-American in 2017.

Walker was given a five-star rating as a recruit and received several scholarship offers before deciding to play with Bruce Brown for the Miami Hurricanes.

He made his college debut with 10 points against Gardner Webb University on his way to an ACC All-Freshman Team season before forgoing his final three years of eligibility.

Lonnie Walker IV was selected with the 18th pick in the 2018 NBA Draft by the San Antonio Spurs, though he didn’t receive much playing time in his rookie year.

Walker saw his role slightly expand before becoming a bigger part of the starting lineup with LaMarcus Aldridge in his third season where he averaged 11.2 points per game.

In his fourth year with the Spurs, Walker came off the bench for the most part, but was still a big contributor that put up 12.1 points per game before hitting free agency.

After the 2021-22 season, Walker signed a one-year contract with the Los Angeles Lakers worth a fully guaranteed $6.479 million.

Joining the Lakers has allowed Walker the chance to play with NBA great like LeBron James, Russell Westbrook, and Anthony Davis.

When Lonnie Walker IV made it to the NBA, his salary was determined by the rookie contract scale that gave him a four-year entry level contract worth a total of $12.4 million.

Walker played out his entire contract with the San Antonio Spurs without receiving an extension and became a free agent after the 2021-22 season.

He then signed a one-year contract with the Los Angeles Lakers worth $6.4 million, all of which was guaranteed money.

Following the season, Walker will become an unrestricted free agent once again, and his estimated net worth with salary and endorsements taken into consideration is approximately $9 Million.

Walker had been in a long-term relationship with girlfriend Emily Miller, with the two announcing their engagement in 2021.

The couple has no children as of now, and Walker has not been in any previous committed relationships before meeting Miller.

Lonnie Walker IV started to fill out his trophy case when he was still a teenager, and he continues to add to his long list of accolades.

Walker has been recognized at state and national levels of basketball while hoping to add plenty of other hardware to his collection.

Here is a list of the top awards and achievements of Lonnie Walker IV’s career:

In terms of individual awards, Walker hopes to one day add NBA All-Star to his resume, with a loftier goal of being a league MVP.

As for team honors, Walker would be thrilled if he were to help a team win the NBA Finals, especially a storied franchise like the Los Angeles Lakers.

How Does Lonnie Walker IV Spend His Money?

Professional athletes are known for dropping big money on some of the most expensive houses in the world, but Walker has decided to go much more modest.

Walker spent $544,500 on his four-bedroom home in La Cantera, Texas, which was well above the average price for the city but certainly near the low-end for NBA players.

Instead of spending money on the most expensive cars in the world, Walker donates much of his time and money to charity, including his own organization that’s focused on helping youth communities in San Antonio and Reading.

Speaking of cars, though, Walker has invested in a local business called Mach1 that specializes in roadside assistance via a smartphone app.

Throughout his basketball career that dates back to his school days, Lonnie Walker IV has had a long list of great moments.

Walker has been part of some great teams that have accomplished a lot, while also having some tremendous individual memories along the way.

Here are some of the highlights of Lonnie Walker IV’s career:

Walker is now entering the prime of his career and hopes to create some more highlights, including winning an NBA Championship.

There is also a new contract coming up for Walker after the 2022-23 season, and he’s setting out to prove to NBA teams that he’s worth tens of millions.

Lonnie Walker has always been an outspoken player to the point where some have called him the most interesting man in the league.

Whether he’s talking about his upbringing, playing with teammates like DeMar DeRozan or the games ahead on the schedule, Walker always has something to say that captures attention.

Here are our favorite quotes from Lonnie Walker IV:

Many people might think it’s easy being a naturally gifted athlete that has made a lot of money in their NBA career, but Lonnie Walker can tell you it’s not easy.

Walker had to make his way through a tough childhood, but has come out on top as a rising star in the NBA that’s worth millions.

Now that you know all about Lonnie Walker IV’s net worth, there’s a lot to be learned from the former All-American basketball player.

Here are some of the best success lessons to learn from Lonnie Walker IV:

1. You Can Always Change

Growing up, Lonnie Walker had hair that people could spot from a mile away and made him look unique, but he no longer sports that hairdo.

Walker admitted that he grew his hair out as a coping mechanism for abuse that he suffered as a child, and cutting his hair was like shedding his skin.

He said that it was like removing a dead weight and a dark time in his past, looking forward to his new life and the future ahead.

Instead, Walker chose to gamble on himself and play on a one-year deal worth $6.5 million to learn from the likes of LeBron James and prove he’s worth a longer and more lucrative deal.

Early on, Walker showed that the decision to sign a one-year deal was brilliant, and he’s likely to receive plenty of high-end offers following the 2022-23 season.

There are many that come into fortune and fame and are happy to collect their money and head home, but Walker wants to use his celebrity status to help the world.

Walker has given a lot back to his hometown of Reading where crime rates are high and education is ranked toward the bottom of the state.

He has established a charitable foundation to build inner-city communities and boost education during his career now that he’s “made it.”

Lonnie Walker IV has earned everything that he’s gotten during his basketball career after overcoming hardships as a child.

Walker has slowly become better each season while in the NBA, as well, and his star is beginning to shine brightly with the Lakers.

There’s no telling where Walker will be spending the 2023-24 NBA season and beyond just yet, but he’ll certainly be making a lot of money wherever he ends up.

As of January 2023, Lonnie Walker IV’s net worth is estimated to be $9 Million.

What do you think about Lonnie Walker IV’s net worth? Leave a comment below.