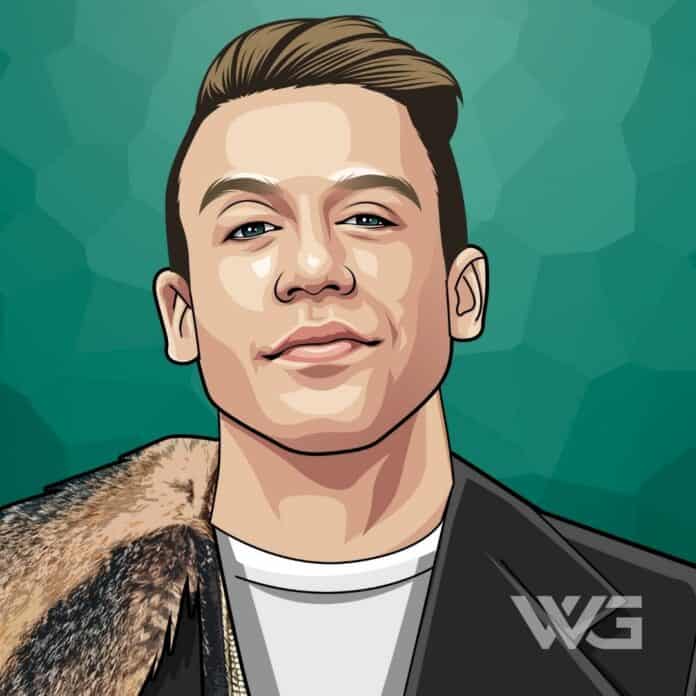 What is Macklemore’s net worth?

As of February 2023, Macklemore’s net worth is roughly $25 Million.

Benjamin Hammond Haggerty, known by his stage name “Macklemore”, is an American rapper, singer, and songwriter from Seattle, Washington.

Benjamin Hammond Haggerty was born on the 19th of June, 1983. He is the son to Bill Haggerty and Julie Schott. Macklemore is one of two boys and was raised with his brother Tim in Seattle. Macklemore is of Irish heritage and he first came into hip-hop when he was 6 years old.

When Macklemore was 15 he began to write his own lyrics. He attended Garfield High School where he started a hip-hop group called Elevated Elements with other students. Macklemore then went on to earn a bachelor’s degree from The Evergreen State College in 2009.

Macklemore began his career in 2000 when he debuted as Professor Macklemore with the ‘Open Your Eyes’ EP which he distributed himself.

A few years later in 2005, he released his debut album ‘The Language of My World’, which earned him a huge local following. Macklemore performed at Bumbershoot, a popular arts and music festival in Seattle in 2008.

Macklemore and his friend Ryan Lewis started to work together in 2009 as a duo. the following year they released the single ‘Irish Celebration’.

The same year, the Macklemore and Ryan Lewis single ‘Thrift Shop’ reached No.1 on the US Billboard Hot 100. The single was credited by Billboard as the first song since 1994 to top the Hot 100 chart without any support from a major label.

In 2015, Macklemore released ‘Growing UP’ for free download, and after a few days, he launched a song ‘Downtown’ which he performed with at the 2015 MTV Video Music Awards.

The duo’s second album ‘This Unruly Mess I’ve Made’ was released in 2016 and their second single ‘Can’t Hold Us’ peaked at No.1 on the Hot 100 Chart.

Mackle more raps about his previous drug addiction and alcoholism. After the 2016 US Elections, he rapped in ‘Wednesday Morning’ about the political future of the country.

In 2017, he and his longtime partner took a break from their collaboration to focus on their solo careers.

As of February 2023, Macklemore’s net worth is estimated to be $25 Million.

Here are some of the best highlights of Macklemore’s career:

“I think there’s a confidence in Gemini that wasn’t necessarily there on This Unruly Mess I’ve Made. I think that with where I was at in my career, coming off the massive success of The Heist, and delving into an album that was really heavy. Really, really dense and attempting to write a nine-minute song on white supremacy, white privilege, police brutality, and the black lives matter movement and make that into a four-part play.” – Macklemore

“I think that there will always be artists out there who think they need to sign a major label deal in order to be successful. And that machine is what is going to work for them – there are tons of examples of pop stars who need that machine.” – Macklemore

“Thrift shopping is really just an extension of me being that same kid and going into a place that’s completely unconventional that has really endless possibilities in terms of outfits that you can put together and really just expressing yourself.” – Macklemore

How much is Macklemore worth?

Macklemore’s net worth is estimated to be $25 Million.

How old is Macklemore?

How tall is Macklemore?

Macklemore is known as one of the best rappers in the world. His incredible songs bring out an important message in every song that he performs. He has also been an icon for the LGBT-community for the huge hit ‘Same Love’ which he released in 2013.

As of February 2023, Macklemore’s net worth is approximately $25 Million.

What do you think about Macklemore’s net worth? Leave a comment below.