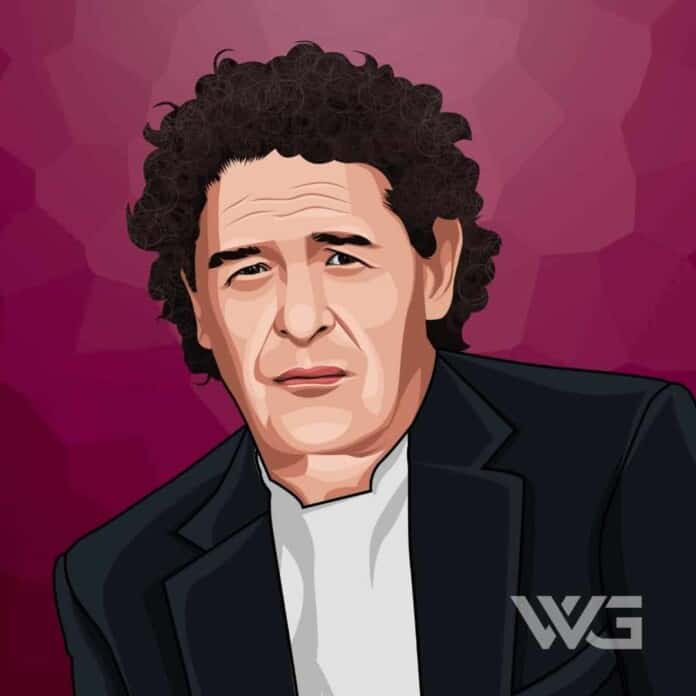 What is Marco Pierre White’s net worth?

As of February 2023, Marco Pierre White’s net worth is roughly $40 Million.

Marco Pierre White is a British chef, restaurateur, and television personality from Leeds. White has been dubbed the first celebrity chef, and the enfant terrible of the UK restaurant scene.

He is best known for becoming the youngest chef ever to have been awarded three Michelin stars.

Marco Pierre White was born on the 11th of December, 1961, in Leeds. White is the son of English chef Frank White and Maria Rosa Gallina in Leeds. He was the third of the four boys born to the couple.

White, who was studying at Allerton High School, dropped out of the same without earning any degree to train himself as a chef.

At the age of 16, Marco Pierre White left for London with just a bag full of books and clothes and little money. In London, he trained as a commis under Albert and Michel Roux at Le Gavroche.

Having gained training from some of the best chefs, White began working in the kitchen at the Six Bells public house in Kings Road with assistant Mario Batali.

In 2008, White, together with James Robertson, initiated the MPW Steak & Alehouse. Originally located in Square Mile in London, they took over the Kings Road Steakhouse & Grill in Chelsea in 2010 as well.

As of February 2023, Marco Pierre White’s net worth is roughly $40 Million.

Here are some of the best highlights of Marco Pierre White’s career:

“There are many times in my life when I could’ve thrown in the towel. Many times in my life when I was on the floor. And when you’re on the floor, never allow anybody to pick you up. It doesn’t matter how long you stay there, make sure you pick yourself up and dust yourself down. Whatever happens, whether you go home today or you don’t go home today, that’s irrelevant. What’s relevant, is you take the knowledge from the experience and you grow as a person.” – Marco Pierre White

“Mother Nature is the true artist and our job as cooks is to allow her to shine.” – Marco Pierre White

“Don’t dress for others, dress for yourself. Clothes should be an extension of what you represent and what you feel inside.” – Marco Pierre White

“Eating is one of the most important aspects of living. I like indulging. I like to eat one food at a time, to savor each individual thing.” – Marco Pierre White

Now that you know all about Marco Pierre White’s net worth, and how he achieved success; let’s take a look at some of the best lessons we can learn from him:

When White retired from cooking he renounced his Michelin stars, much to the bewilderment of his peers.

One of the main reasons White went into retirement was that he was working 100 hour weeks.

3. Don’t Be Afraid To Stand Up To Customers

How much is Marco Pierre White worth?

Marco Pierre White’s net worth is estimated to be $40 Million.

How old is Marco Pierre White?

How tall is Marco Pierre White?

He has also made several appearances on cookery shows and cooking-related reality competitions.

As of February 2023, Marco Pierre White’s net worth is approximately $40 Million.

What do you think about Marco Pierre White’s net worth? Leave a comment below.

Dejounte Murray is one of the top defensive players in the NBA who became a multi-millionaire thanks to a massive contract with the San Antonio Spurs.