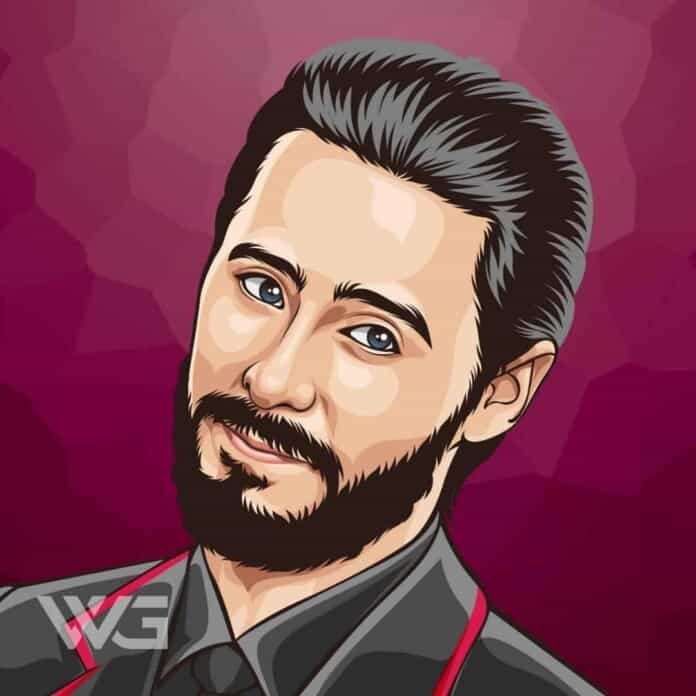 What is Jared Leto’s net worth?

Jared Leto is an American actor, singer, songwriter, and director from Louisiana.

After starting his career with television appearances in the early 1990s, Leto achieved recognition for his role as Jordan Catalano on the television series ‘My So-Called Life’.

Jared Joseph Leto was born on the 26th of December, 1971, in Louisiana. His parents divorced when he was very young and he was brought up by his mother Constance.

The family moved frequently in search of better job opportunities for the struggling single mother.

Leto attended Flint Hill School and later went to Emerson Preparatory School from where he graduated in 1989. He first enrolled at Philadelphia’s University of the Arts only to shift to New York City’s School of Visual Arts after realizing his interest in acting.

Leto’s career began when he moved to Los Angeles in 1992 to pursue his career; he was looking for opportunities in both music and acting. He landed his first role in a cameo in the television show ‘Camp Wilder’ the same year.

In 1995, he landed a small role in the drama film ‘How to Make an American Quilt’. He played the lead role in the film ‘The Last of the High Kings’ in 1996 which was a coming of age movie based on the experiences of a group of teenagers.

Leto formed a rock band 30 Seconds to Mars in 1998 along with his brother Shannon Leto and recruited a few instrumentalists to complete the lineup. He served as the lead vocalist, songwriter, and guitarist for the band.

In the 1999 drama film, ‘Girl, Interrupted’ he played the character of Toby Jacobs opposite Winona Ryder. His co-stars in the movie included big names like Angelina Jolie and Brittany Murphy.

He starred in the 2009 science fiction drama film ‘Mr. Nobody’ as Nemo Nobody, the last mortal on the Earth who at the age of 118 narrates the main events in his life.

Here are some of the best highlights of Jared Leto’s career:

“It’s not like I’m hanging out at shopping malls or going to celebrity golf tournaments. I’m so in my own little world. I got my dog, my music, my brother, a couple of friends.” – Jared Leto

“I’ve always liked Saturn. But I also have some sympathy for Pluto because I heard it’s been downgraded from a planet, and I think it should remain a planet. Once you’ve given something planetary status it’s kind of mean to take it away.” – Jared Leto

“I used to like to break into other people’s houses and sit in their rooms.” – Jared Leto

“I showed up in L.A. with $500 and a backpack and I stayed at a shelter, so nobody handed me anything.” – Jared Leto

“Approval isn’t necessary. It’s nice when you get it, but it’s not going to stop us from being who we are. I mean, if I’d have listened to approval, I’d never have made it one day onstage. But to be criticized, if there’s validity, as upset as you are, you can learn from it.” – Jared Leto

Now that you know all about Jared Leto’s net worth, and how he achieved success; let’s take a look at some of the best lessons we can learn from him:

1. If In Doubt, Wear A Leather Jacket

In every iteration of Jared Leto, one staple’s endured: the leather jacket. It’s been there through his Kurt Cobain phase, his sad rocker phase, even his high-fashion makeover.

It’s simple, timeless and – if you get the fit right – can take you straight from the office to the bar. The most versatile takes are black with a few biker embellishments: asymmetric zip, yes; gang logo in studs on the back, probably not.

Odds are Jared Leto came out of the womb with a flannel shirt tied around his waist. The grunge staple is having a moment, part of menswear’s embrace of all things 1990s, but when you’ve also got the slim jeans and rocker hairstyle (plus a platinum record on your wall) it adds a dose of authenticity.

3. Sportswear Is An Easy Wear

Whatever madness goes on up top, down below Leto’s likely got some variant of a slimline jogger. Smart move.

Gym-wear is now every-wear, which means if you hit your fits and fabrics – tapered from thigh to ankle and thicker wool or cotton than you’d have worn to PE – they go anywhere you’d wear a chino, dressed up with a bomber or button-down and down with a tee or vest.

How much is Jared Leto worth?

Jared Leto’s net worth is estimated to be $90 Million.

How old is Jared Leto?

How tall is Jared Leto?

What do you think about Jared Leto’s net worth? Leave a comment below.