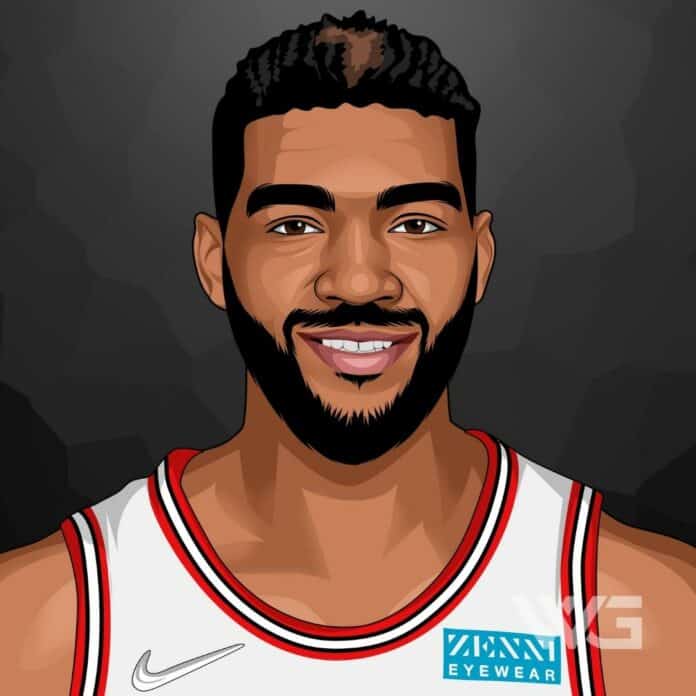 What is Patrick Williams’ net worth?

Patrick Williams is an American professional basketball player who is currently a power forward for the NBA’s Chicago Bulls.

Williams was the fourth overall selection in the 2020 NBA Draft after spending his college career with Florida State University.

As of January 2023, Patrick Williams’ net worth is estimated to be $15 Million.

Patrick Lee Williams was born August 26, 2001 in Charlotte, North Carolina, and grew up in the city.

Williams was taught basketball at a young age as his parents were both college players and he quickly became one of the best youth athletes in Charlotte.

From 2015 to 2019, Williams attended West Charlotte High School where he was a four-year varsity player that received several scholarship offers from major schools.

Williams played in the Jordan Brand Classic and was given a five-star recruiting ranking and committed to play at Florida State University.

Due to many thinking he was NBA-ready out of high school, Williams spent just one season at Florida State where he was named as the ACC Sixth Man of the Year and a member of the ACC All-Freshman Team.

Williams decided to forgo his final three years of NCAA eligibility and was selected fourth overall by the Chicago Bulls in the 2020 NBA Draft.

During his rookie season, Williams instantly became a starter and played in 71 games, averaging 9.2 points and 4.6 rebounds en route to being selected for the NBA All-Rookie Second Team.

Unfortunately, Williams missed much of his second year due to a wrist injury that limited him to 17 games before being inserted back into the starting lineup in the 2022-23 season.

When Williams was drafted fourth overall, his salary was predetermined by the rookie salary scale that gave him just over $7 million in his first season.

For the 2023-24 campaign, Williams is set to make a fully-guaranteed $9.8 million, which then puts him in line for a $12.9 million qualifying offer from the Bulls.

The franchise has the option to extend Williams’ contract before then, as well, which is what many expect them to do if Williams continues to improve.

As for his net worth, Williams was able to establish a solid foundation for himself as a top-five draft pick and has since grown to an estimated $15 million.

Patrick Williams is the son of Eddie and Janie Williams, both of whom played college basketball at Johnson C. Smith University.

Williams does not have children, has never been married, and he’s currently believed to be single.

Instead, much of Williams’ focus has been on improving his game at the professional level as he bounces back from an injury-plagued sophomore campaign.

Patrick Williams hasn’t spent much time at the professional level just yet, but he’s already earned recognition from the NBA.

Most of the accolades that Williams has received have come from his amateur years, but he’s already off to a great start.

Here is a list of accomplishments from Patrick Williams’ young career:

As a former lottery pick in the NBA Draft, the Chicago Bulls are hoping that he leads them to their seventh NBA championship.

On a more personal level, Williams wants to become an NBA All Star and join the likes of Michael Jordan, Scottie Pippen and other former Bulls legends.

How Does Patrick Williams Spend His Money?

Since he’s still on his rookie contract, Williams isn’t among the richest NBA players in the world, but it still a multi-millionaire.

Williams comes from a humble background and hasn’t spent big on the most expensive cars in the world, though it’s reported that he does drive a red BMW estimated to be around $80,000.

While still proving himself and looking for a contract extension, Williams is frugal and doesn’t spend big on jewelry or clothing.

Instead, Williams focuses more of his efforts on charity work including the Pediatric Cardiology ICU at Advocate Children’s Hospital in the Chicago area.

Patrick Williams has been able to accomplish a lot in a short amount of time, having just two full seasons between college and the NBA.

When you take his amateur career into consideration, Williams has a long list of life-changing moments and career high points.

Here are some of the top highlights of Patrick Williams’ career:

Williams is still in the infancy of his NBA career and will no doubt continue to add to his legacy as the years go on.

There are already lofty expectations for Williams and the rest of his career, and he should be able to accomplish quite a bit as long as he remains healthy.

Patrick Williams knew that he was headed to the NBA from a young age, and now gets to play alongside the likes of Zach LaVine and DeMar DeRozan as he grows his game.

Throughout his career, Williams has talked at length with the media regarding his expectations and adapting to the NBA.

Here are our favorite quotes from Patrick Williams:

Patrick Williams now finds himself in the spotlight, playing for one of the richest NBA teams in the world as a cornerstone of the franchise.

Williams is one of the brightest young stars in the NBA and has learned a lot of valuable lessons from his rapid ascension.

Now that you know all about Patrick Williams’ net worth, there’s plenty to be learned from the former top-five draft pick.

Here are some of the best success lessons to learn from Patrick Williams:

There are going to be setbacks in any career, and Patrick Williams knows that after suffering from an injury that put a hold on his development.

Williams struggled out of the gate upon his return, but told reporters that his plan to improve was just to stick with what he was doing.

There are going to be people that are evaluating your performance, which can lead to a lot of pressure, but just stick with what you’re doing and try to improve.

2. Learn From The Best

When you’re drafted to the Chicago Bulls as one of the first selections, there are a lot of expectations with the legacy of Michael Jordan lingering around.

During his time in the NBA, Williams has been listening to legends like Derrick Rose to help him improve his game.

Williams is listening to his coach Billy Donovan, as well, who is using his skills as a former NCAA champion to teach Williams how to get to the top of his game.

The skill set that you need to dominate college basketball and in the NBA is incredibly different, which is why the learning curve can be challenging for players.

To end up as an All-Star in the NBA, players have to adapt their game and Williams is learning that as his career goes on.

Williams has learned to work on all facets of his game, including getting more physical in rebounding opportunities and how to get open looks rather than just attacking the rim as much as possible.

Patrick Williams still finds himself adjusting to the NBA level, which was to be expected as he left college early and suffered an injury in his second season.

Williams appears to be getting the hang of things now and is receiving praise from his coaches and teammates as he grows as a player.

With a strong rest of the NBA season, Williams will no doubt be looking at a large contract extension that will pad his net worth considerably.

As of January 2023, Patrick Williams’ net worth is estimated to be $15 Million.

What do you think about Patrick Williams’ net worth? Leave a comment below.