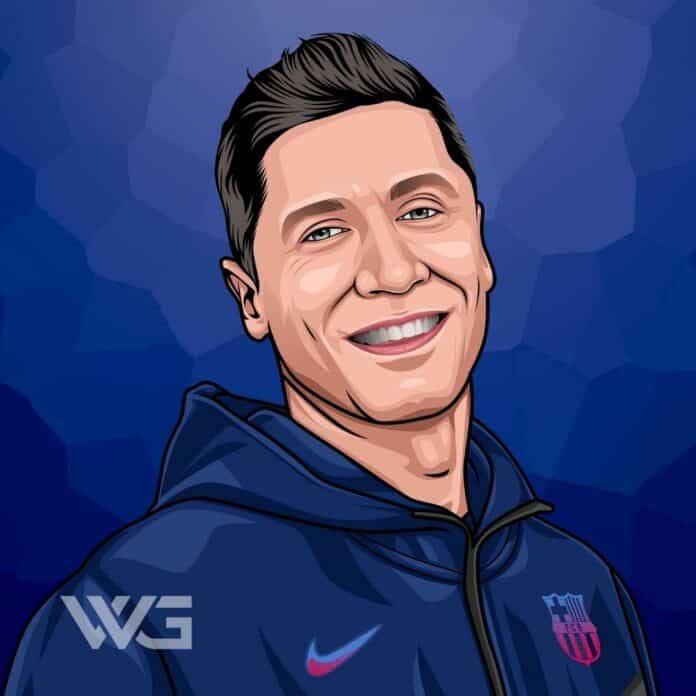 What is Robert Lewandowski’s net worth?

Robert Lewandowski is a Polish striker known for playing for Bayern Munich and the Polish national team, winning many tournaments throughout his career.

One of the best strikers playing today, he’s been a top goal scorer in the Polish league and played in the UEFA Champions League finals.

As of February 2023, Robert Lewandowski’s net worth is estimated to be $85 Million.

Robert Lewandowski was born on 21st August 1988, in Warsaw, Poland, growing up in Leszno, West County.

A keen soccer player from an early age, he played as an unregistered player for a local club, Partyzant Leszno, in his youth.

In 1997, while still a teenager, he signed up to the team MKS Varsovia Warsaw, playing there for seven years before moving to Delta Warsaw.

In 2008, Robert Lewandowski was signed to Lech Poznan, where his success as the team’s top scorer paved the way for his involvement with the Bundesliga club Borussia Dortmund in 2010.

While with Borussia Dortmund, Lewandowski once again became the top goal scorer, playing in the UEFA Champions League and gaining recognition from one of the richest soccer teams in the world, Bayern Munich.

With Bayern Munich, he won his third Bundesliga title and went on to score one hundred goals with the German team, becoming their all-time foreign goal scorer.

By the early 2000s, Lewandowski had picked up multiple awards, including Striker of the Year and UEFA Men’s Player of the Year, significantly boosting his value.

In 2020, he equaled the record set by Cristiano Ronaldo for away goals in a season, while the following year, he placed second behind Lionel Messi for the Ballon d’Or award.

Lewandowski signed various sponsorship and endorsement deals off the pitch, including with the Phil Knight-owned company, Nike.

Lewandowski’s skill on the pitch has made him one of the richest soccer players in the world, with the Polish sports personality also drawing income through his brand ambassador deals.

Just as Robert Lewandowski’s career earnings have seen a steady increase over the course of his career, so too has his net worth increased in tandem.

By 2020, he had joined the ranks of the richest athletes in the world, with his boosted income topping up his net worth to new heights.

With a consistently high base salary topped up with lucrative endorsement deals, his net worth is unlikely to diminish any time soon.

Robert Lewandowski married Anna Lewandowska in June 2013, with whom he has two daughters, Klara and Laura.

A practicing Catholic, he is also a qualified coach and manager, with a Bachelor of Physical Education from the Academy of Sport Education in Warsaw.

His official Instagram account has 30 million followers, making it one of the internet’s most popular professional soccer player accounts.

Robert Lewandowski’s career has seen him play for some of the most successful soccer teams in the world.

Here are some of the best achievements and honors from Robert Lewandowski’s career:

With Lewandowski one of the best soccer players active today, his list of awards and accolades will continue to grow as he helps his teams achieve additional victories.

How Does Robert Lewandowski Spend His Money?

With his huge annual income and net worth, Robert Lewandowski has been able to treat himself to prime real estate.

In addition to his property in Munich, he owns a high-end luxury apartment in Warsaw in the classy Zlota 44 block.

He also owns several of the most expensive cars in the world, including a Maserati, Aston Martin, Audi, and Ferrari, with an estimated combined worth of $9 million.

Lewandowski has enjoyed many successes with a sterling professional career on the national and international levels.

Here are some of the best highlights of Robert Lewandowski’s career:

It’s an impressive list of high points and successes expected from a soccer player with Lewandowski’s exceptional track record.

One of the most inspirational soccer players of his generation, Robert Lewandowski has plenty to say about the art and politics of the sport.

Here are our favorite quotes from Robert Lewandowski:

Now that you know all about Robert Lewandowski’s net worth, we’ll take a look at how his experiences as a professional soccer player can inspire our own lives.

Here are some of the best success lessons to learn from Robert Lewandowski:

1. Make Sure You Have Great Friends And Mentors

Robert Lewandowski’s success has come from a lot of hard work and training, but he wouldn’t be where he is today without exceptional trainers.

Talented colleagues and coaches will help inspire you to excel even more than you can off your own back.

In order to perform at the top of your game, your body needs to be treated with the utmost respect.

Lewandowski’s strict diet and training regimen is a great example of the discipline needed to be the best you can be.

3. Learn To Be Patient And Persevere

Success doesn’t come overnight, and it can take years to develop into the strongest and fastest possible athlete you can be.

Appreciate that it takes time to perfect any skills and persevere at all times.

That wraps up this article exploring the net worth of Polish soccer player Robert Lewandowski, covering his career highs and championship victories.

Lewandowski continues to dominate the game, with the Polish footballer remaining one of the world’s best soccer players.

We’ll keep this article up to date on his career stats and net worth, so be sure to check back in the future for the latest updates.

As of February 2023, Robert Lewandowski’s net worth is estimated to be $85 Million.

What do you think about Robert Lewandowski’s net worth? Leave a comment below.