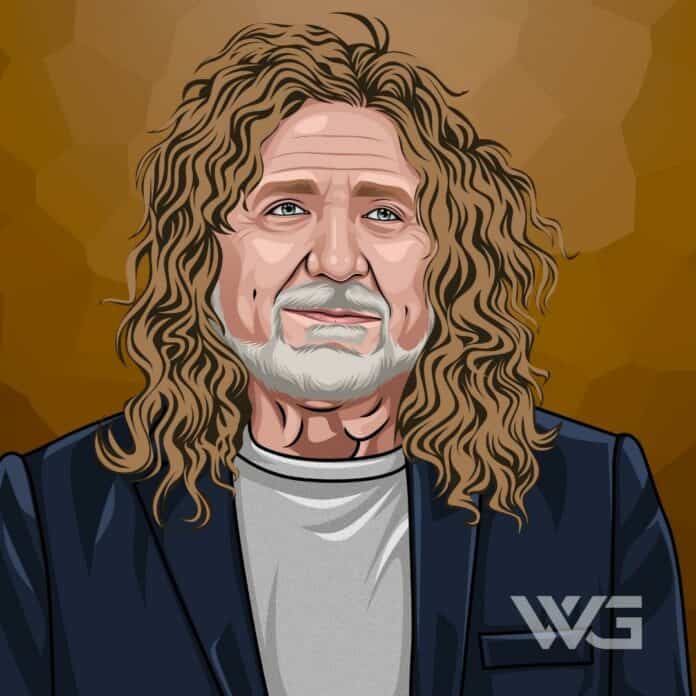 What is Robert Plant’s net worth?

Robert Plant is an English singer and songwriter best known as the lead singer and lyrics writer for the rock band Led Zeppelin.

With Led Zeppelin, the band released many hit singles and albums, with Plant’s post-Zeppelin solo albums and collaborations earning him many new fans worldwide.

From an early age, Robert Plant was interested in music, reflecting his admiration for Elvis Presley later in life.

After attending King Edward VI Grammar School for Boys in Stourbridge, Plant became an admirer of the blues, listening to Robert Johnson and Willie Dixon while a teenager.

He abandoned his studies to become a chartered accountant in the early 1960s, focusing on his music and cutting three singles for CBS Records.

Robert Plant met up with Jimmy Page in 1968 when Page and bassist John Paul Jones was looking for a lead singer for his new band, which was initially named the Yardbirds but would later change to Led Zeppelin.

Their debut album was a huge hit and redefined heavy metal for the era, launching the band on a hugely successful decade-long career.

Signed with Atlantic Records, the band would sell up to 300 million albums worldwide, with tracks such as Stairway to Heaven becoming one of the most iconic rock tracks of all time.

Plant is widely considered one of the best rock singers of all time, on par with some of the richest singers in the world, including Mick Jagger, Roger Daltrey, and Freddie Mercury.

During his solo career, Plant has worked with stars such as Phil Collins and Jeff Beck and frequently returned to work with guitarist Jimmy Page.

From the 2000s onwards, Plant’s collaborations continued to diversify, with the star performing alongside Tom Waits, T Bone Burnett, and Alison Krauss.

In 2019, he held a reunion concert hosted by Bill Murray and Martin Short, which featured Sheryl Crow and Jimmy Vaughan in the line-up.

Robert Plant is one of the richest rockstars in the world, reflected in his eye-watering annual career earnings throughout his life.

With ongoing income and royalties from his many singles and albums, both with Led Zeppelin and as a solo artist, Robert Plant’s net worth is truly impressive.

While much of his net worth came during the peak of Led Zeppelin’s success, his career has been packed with collaborations and hit releases in the years since.

Plant’s official website indicates continuing activities from the iconic lead singer, so we can expect his net worth to climb in the future.

Robert Plant married his first wife, Maureen Wilson, in 1968, with whom he has three children, two daughters, and a son.

An enthusiastic student of Welsh history, he donated money to create a bronze statue of a Welsh prince in 2004.

He also maintains a popular official Instagram account, which he uses to keep fans up to date on his latest musical activities and other ventures.

With the huge success of Led Zeppelin, Robert Plant has been nominated or awarded many high-profile music industry awards and accolades.

Here are some of the exceptional achievements from Robert Plant’s career:

With recognition from all the major awards ceremonies and institutions, Robert Plant’s career in the music industry has been exemplary.

How Does Robert Plant Spend His Money?

With his enormous net worth and consistent income from royalties and business ventures, Robert Plant is known for his car collection and real estate investments.

Plant owns several classic cars, including an Aston Martin DB5 and a Ferrari GTB 275, once named “the most satisfying sports car in the world.

He also owns considerable real estate comparable to some of the most expensive houses in the world, including an estate known as the Argoed in Monmouthshire, Wales.

With a decades-long career spanning the entirety of Led Zeppelin’s existence and extending into a successful solo career, Robert Plant’s journey has plenty of exciting high points.

Here are some of the best highlights of Robert Plant’s career:

Robert Plant continues to work on various projects and collaborations, so we can expect more notable high points as his career progresses.

Robert Plant has often shared his insights into the creative process of writing lyrics and performing live, reflecting on his many experiences in the music industry.

Here are our favorite quotes from Robert Plant:

Now that you know all about Robert Plant’s net worth let’s take a closer look at some of the important lessons we can learn from his life and career.

Here are some of the best success lessons to learn from Robert Plant:

1. Don’t Be Afraid To Draw Inspiration From Disparate Sources

The many artists who influenced Robert Plant come from a wide spectrum of musical styles and genres.

Draw inspiration wherever you can, so you can mold it into your own unique sound.

2. Celebrate Your Victories Loudly And Proudly

The lyrics from the Led Zeppelin song, Out on the Tiles says, “I’m so glad I’m living and gonna tell the world I am.”

If you’ve succeeded in something, don’t be afraid to tell people about it.

3. When You Achieve Success, Make Sure You Give Something Back To The World

Plant has been involved in numerous charities over the course of his career, proving that you should always try to give something back for your success.

He’s worked with Greenpeace and other major charities and used his fame to help raise funds for good causes.

That concludes this article exploring the net worth of Robert Plant, from his experiences with Led Zeppelin to his diverse collaborations as a solo performer.

Plant has had a prolific output of music over the course of his career and continues to work with some of the world’s leading artists to this day.

With his net worth likely to change, we’ll be updating this article again to bring you the latest details, so be sure to check back again in the future.

What do you think about Robert Plant’s net worth? Leave a comment below.