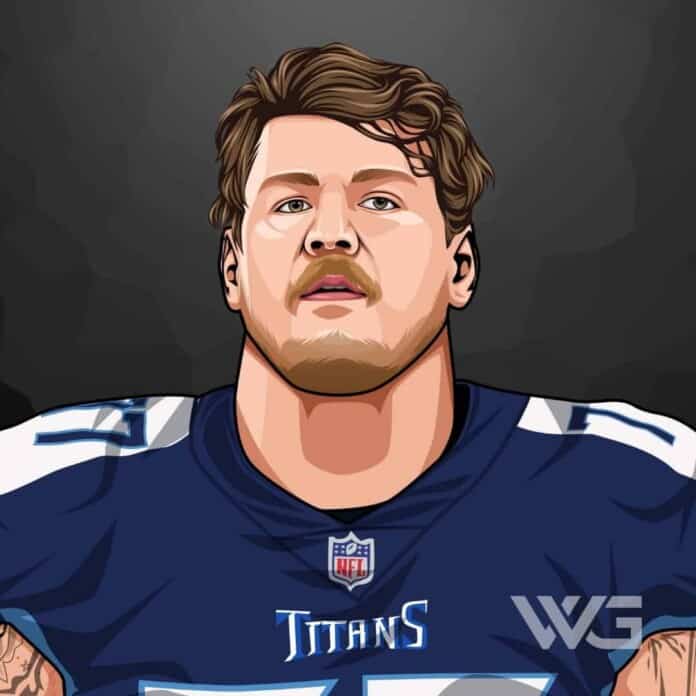 What is Taylor Lewan’s net worth?

Taylor Lewan is an American football offensive tackle for the Tennessee Titans of the NFL.

Lewan was drafted by the Titans in the first round of the 2014 NFL Draft. He played college football at Michigan where he was a two-time All-American.

As of February 2023, Taylor Lewan’s net worth is approximately $15 Million.

Taylor Curtis Lewan was born on the 22nd of July, 1991, in Loomis, California. Lewan is the son of Dave Lewan and Kelly Riley. Dave was an offensive lineman at the University of Michigan.

Lewan played his first three years of high school football for Cactus Shadows in Cave Creek, Arizona. He was a defensive end before transferring to Chaparral High School for his senior season, where he became an offensive lineman.

Lewan was selected by the Tennessee Titans as the eleventh pick of the first round of the 2014 NFL Draft. He signed a four-year $11.48 million fully guaranteed contract and a signing bonus of $6.67 million.

In his rookie year, Lewan played in 11 games starting six of them due to injuries, he was named to PFWA All-Rookie team.

The following year, During a 27-20 Week 1 loss to the Miami Dolphins, Lewan suffered a concussion after a blindside hit by Andre Branch. Lewan missed the rest of the game and the next game against the Houston Texans.

On July 24, 2019, Lewan announced in a video that he has suspended four games after failing a drug test for a banned substance.

Here are some of the best highlights of Taylor Lewan’s career:

“I am 100% at issue with that. It’s not intentional. I do not mean to do it. My intentions are good. I’m just trying to finish. And it’s killing the team. I know that. You guys know that. No one needs to call me out on anything, because I got it, boys.” – Taylor Lewan

“I am completely screwing the team with the number of penalties I’ve had in the last, what, six games. It’s crazy. It’s horrible. I cannot get penalties. I’m sorry, there’s no need to ask about it because I know I’m an absolute liability when it comes to penalties.” – Taylor Lewan

“I will work on it. I might even go practice not doing penalties in the bye week. I’ll do my absolute best to work on it. I won’t even hold my wife’s hand this whole entire bye week because I do not want to get called for holding. These damn penalties are absolutely kicking me in the ass.” – Taylor Lewan

Now that you know all about Taylor Lewan’s  net worth, and how he achieved success; let’s take a look at some of the lessons we can learn from him:

Success is no accident. It is about hard work, learning, and sacrifice and most of all, love of what you are doing or learning to do.

Success seems to be connected with action. Successful people keep moving. They make mistakes, but they don’t quit.

Keep ongoing, and the chances are that you will stumble on something, perhaps when you are least expecting it.

How much is Taylor Lewan worth?

Taylor Lewan’s net worth is estimated to be $15 Million.

How old is Taylor Lewan?

How tall is Taylor Lewan?

Taylor Lewan is a professional American football player who was selected in the 2014 NFL Draft in the first round and is the three-time winner of the Pro Bowl. He is also referred to as the “Father of Nashville” or only “Dad.”

What do you think about Taylor Lewan’s net worth? Leave a comment below.