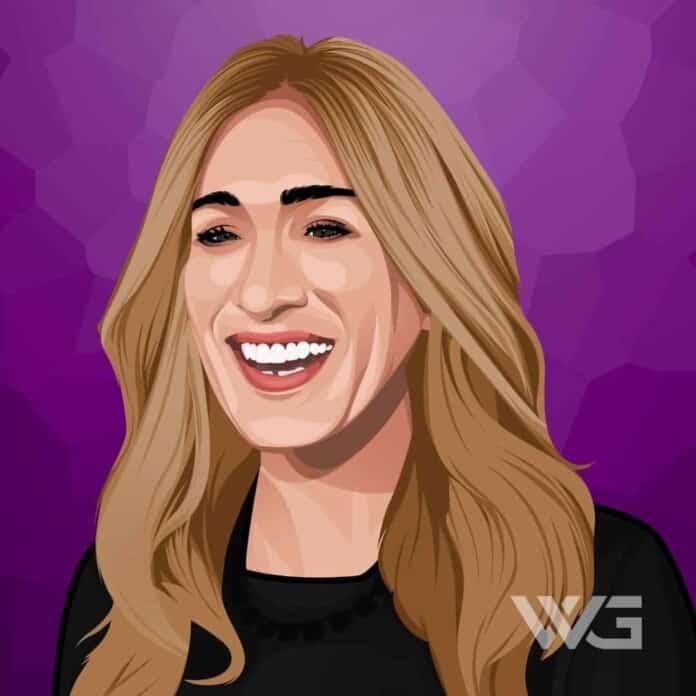 What is Sarah Jessica Parker’s net worth?

As of January 2023, Sarah Jessica Parker’s net worth is estimated to be roughly $200 Million.

Sarah Jessica Parker is an American actress, producer, and designer from Nelsonville, Ohio. Parker is best known for her role as Carrie Bradshaw on the HBO television series ‘Sex and the City’, for which she has won multiple awards.

Sarah Jessica Parker was born on the 25th of March, 1965, in Nelsonville, Ohio.

Her parents divorced when she was very young and she was raised by her mother and stepfather. She contributed to the family income through her dancing and singing gigs.

With support from her family, she eventually won her first Broadway role in ‘The Innocents’. They then moved to New Jersey, where she studied at the Dwight Morrow High School.

After appearing in multiple Broadway productions, Sarah Jessica Parker made her television debut. Her first important role on TV was in the series ‘Square Pegs’.

Her early works on the big screen include ‘Firstborn’, ‘Flight of the Navigator’, ‘LA Story’ and ‘Honeymoon in Vegas’. In the mid-1990s, she continued to appear in several other successful films, such as ‘Hocus Pocus’, ‘Mars Attack’ and ‘The First Wives Club’.

In 1998, she started playing the lead role of Carrie Bradshaw in the TV series ‘Sex and the City’. The show became very popular in the coming years and was nominated for fifty Emmy Awards, winning seven.

In the ensuing years, she appeared in films, such as ‘The Family Stone’, ‘Failure to Launch’ and ‘Did You Hear About the Morgans?’.

In 2013, she played a voice role in ‘Escape from Planet Earth’, a Canadian-American animated film which was her first voice role in a movie. The film was a commercial success, but was met with mixed to negative reviews.

Here are some of the best highlights of Sarah Jessica Parker’s career:

“Being single used to mean that nobody wanted you. Now it means you’re pretty sexy and you’re taking your time deciding how you want your life to be and who you want to spend it with.” – Sarah Jessica Parker

“I feel funny saying this, I’m not really a shoe shopper. I’m not going to go out and buy hundreds of pairs of shoes. I’m much more thoughtful than [Carrie] is, which is also one of the treats of playing her all these years.” – Sarah Jessica Parker

“I’ve worn so many things, I’ve tried on so many things…I’ve spent probably thousands of hours in fittings. I can know so quickly how something’s going to feel on me, look on me. It’s a pretty fast courtship. I say yes or no pretty quickly.” – Sarah Jessica Parker

“People should dress the way they want. Any rules for age or shape are silly. If you walk out the door feeling good about yourself, that’s what counts.” – Sarah Jessica Parker

“As a working mother high heels don’t really fit into my life anymore – but in a totally wonderful way. I would much rather think about my son than myself.” – Sarah Jessica Parker

Now that you know all about Sarah Jessica Parker’s net worth, and how she achieved success; let’s take a look at some of the best lessons we can learn from her:

When Sarah Jessica Parker signed for Sex & the City, HBO was not as big and powerful as we know it today. It was nothing more than a cable channel that played some movies and the script was kind off risque and new for TV.

The pilot went well, but when they told her that they wanted to film the rest of the season, she suddenly had second thoughts: After filming two more episodes, taking this risk really paid off and she knew that she wouldn’t regret the moments she spent on it.

Sarah Jessica Parker is one of 7 children and was raised in a very polite way, that she never let go of when she became hot and happening in Hollywood.

There is almost nothing she didn’t do! Sarah Jessica Parker is a producer but also has worked in fashion and beauty for years and, as mentioned before, she is also giving back to the world through the charity work that she does.

In 2011, she was one of the highest-paid actresses and her perfume line is also a top seller. Be diverse.

How much is Sarah Jessica Parker worth?

Sarah Jessica Parker’s net worth is estimated to be $200 Million.

How old is Sarah Jessica Parker?

How tall is Sarah Jessica Parker?

Sarah Jessica Parker is a well-known American actress and producer. She became known for her portrayal of Carrie Bradshaw in the popular TV series ‘Sex and the City’. Parker is one of the most well-known actresses in the industry, and she has been a popular actress for over two decades.

What do you think about Sarah Jessica Parker’s net worth? Leave a comment below.

Ivica Zubac is a current National Basketball Association player for the Los Angeles Clippers that made millions in Croatia before coming to the United States.