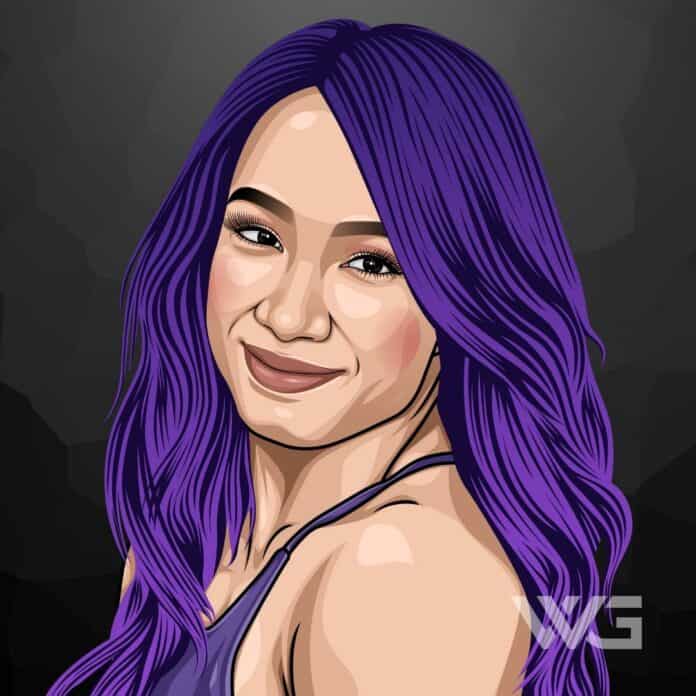 What is Sasha Banks’ net worth?

Sasha Banks is an American professional wrestler and actress who has performed on the independent circuit and the WWE, winning many tournaments and championships.

Outside of wrestling, she’s developed an impressive filmography both with the WWE and the popular Disney Star Wars series.

As of November 2022, Sasha Banks’ net worth is estimated to be $4 Million.

Sasha Banks, whose real name is Mercedes Justine Kaestner-Varnado, was born January 26, 1992, in Fairfield, California, the daughter of Reo and Judith Varnado.

As a young child, she moved from one location to another, spending time living in Minnesota as the family sought care for her autistic brother, Joshua.

Banks has strong ties to the entertainment industry and several celebrity relations, including rappers Snoop Dogg and Daz Dillinger.

After settling in Boston, Banks became involved in the local wrestling scene, drawing inspiration from All Japan Women’s Pro-Wrestling.

After training as a wrestler in 2008, Sasha Banks enrolled in Chaotic Wrestling in Massachusetts, performing using the stage name Mercedes KV.

After achieving some success with the Chaotic Wrestling Women’s Championship, Banks competed briefly on the independent circuit before joining World Wrestling Entertainment in 2012.

By 2014, Banks had secured her reputation as a top-class wrestler, winning the NXT Women’s Championship before making her debut on Raw in 2015.

As a member of Team B.A.D., she joined Becky Lynch and entered into a feud with Brie Bella and Nikki Bella, making a name for herself as a leading diva.

In 2017, Banks won the Raw Women’s Championship, following this with another victory at the WWE Women’s Tag Team Championship in 2019.

Outside of wrestling, Sasha Banks has appeared in several movies and television shows, notably alongside Pedro Pascal in the Jon Favreau Star Wars series, The Mandalorian.

She also appeared with Chris Jericho in the music video for Song for Sasha Banks, written and performed by The Mountain Goats in 2018.

As a professional wrestler, Sasha Banks has enjoyed a lucrative career both on the independent circuit and as a member of the WWE.

Her annual salary with the WWE is estimated to be around $250,000, with the star taking home additional income through her sponsorships and endorsements.

Work in movies and television shows, as well as licensing her likeness to video games, will ensure additional income through royalties and fees.

With multiple income streams as a wrestler and actress, Sasha Banks has seen her net worth increase since her career began.

Her wealth has allowed her to diversify her interests, with her real estate investments and other assets adding to her overall net worth.

Banks remains active in wrestling and continues to land roles in the entertainment industry, including appearances in WWE DVDs and other merchandise.

With these promising projects in the pipeline and continued royalties, her annual net worth will likely continue to grow.

In 2016, Sasha Banks married the retired professional wrestler Sarath Ton after meeting him on the independent wrestling circuit while he was using the name Mikaze.

A huge fan of Eddie Guerrero, Banks has cited his style and mentality as a core reason why she took up professional wrestling herself.

With a low-key presence on social media, her official TikTok account is used to post videos relating to her upcoming events and other activities.

Throughout her career as a professional wrestler, Sasha Banks has worked with some of the richest wrestlers in the world, earning awards and accolades for her performances in the ring.

She has broken several records, won many championships, and is widely considered one of the best female wrestlers.

Here are some of the awards and accolades from Sasha Banks’ career:

Her career is showing no signs of slowing down, and as she continues to branch out into acting, we can expect more awards in the future.

How Does Sasha Banks Spend Her Money?

With her impressive net worth, Sasha Banks has secured a comfortable life, preferring to reside in Fairfield, California to maintain close ties to the entertainment industry.

Her California home includes many bedrooms and bathrooms, as well as its own swimming pool and other luxury amenities.

She is also known for her impressive hand rings made from some of the most expensive gemstones in the world, sometimes wearing them for wrestling events.

Sasha Banks’ impressive professional wrestling career has featured many high points as she has risen through the ranks of the sport.

In addition to her many wrestling championships, she’s also proven herself to be a successful actress with a promising career in Hollywood.

Here are some of the best highlights of Sasha Banks’ career:

We can expect great things in her future career with more tournaments, championship wrestling events, and future movie roles.

Sasha Banks has shared her thoughts on the nature of professional wrestling in many interviews, as well as her early life and inspiration.

This includes her in-depth opinions on the Divas revolution and her role in helping bring this about.

Here are our favorite quotes from Sasha Banks:

Now that you know all about Sasha Banks’ net worth, we’ll explore how her life and professional wrestling experiences can inspire our own lives.

Here are some of the best success lessons to learn from Sasha Banks:

1. Sometimes Opportunities Are Out Of Our Control

Sasha Banks impressed audiences with her performance on the Star Wars series, The Mandalorian, but she didn’t audition for the role.

She was lucky enough to have been selected as the first pick for her character, so didn’t need any acting lessons for the part.

2. Pursue Your Dreams At All Costs

With her dedication to training and becoming the best wrestler she could possibly be, Sasha Banks is an inspiration for those who want to excel in their domain.

Don’t be deterred by setbacks; stick to your goals if you want to accomplish them.

3. Use Yoga To Improve Your Flexibility

Sasha Banks has explained the importance of yoga to improve flexibility, attending classes in New York City and sharing videos of the classes online to inspire others to do the same.

That concludes this article covering the professional wrestling and acting career of Sasha Banks and how she has accumulated her net worth.

Banks continues to wrestle professionally while expanding her repertoire into acting, and we can expect more great highlights as her career develops.

Since her net worth is likely to change, we’ll be updating this article in the future, so be sure to come back again for the latest facts and figures about Sasha Banks.

As of November 2022, Sasha Banks’s net worth is estimated to be $4 Million.

What do you think about Sasha Banks’ net worth? Leave a comment below.