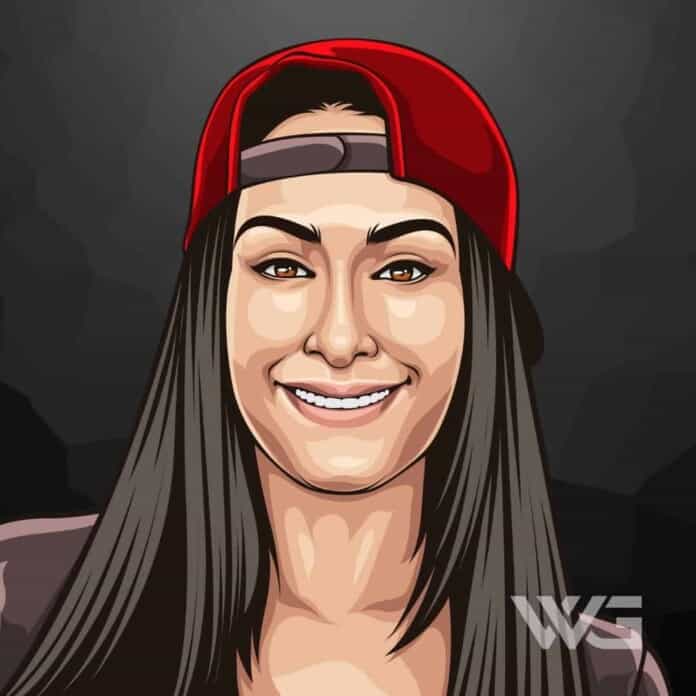 What is Nikki Bella’s net worth?

As of November 2022, Nikki Bella’s net worth is approximately $8 Million.

She signed to WWE in 2007 and was assigned to developmental territory Florida Championship Wrestling (FCW) alongside her twin sister Brie Bella, forming the duo The Bella Twins.

Keen soccer enthusiasts, she along with her twin sister played for the Scottsdale club in elementary school. She graduated from Chaparral High School in 2002.

Bella began her career by hunting for jobs in modeling and acting and she eventually got a head start by appearing in a Fox TV show ‘Meet my Folks’.

Nikki and her sister had some failed attempts in the form of the competitions such as ‘International Body Doubles Twins Search’ and the ‘2006 WWE Diva search’.

WWE signed Nikki for a development contract in June 2007, along with her twin sister and they made their in-ring debut in the Florida Championship wrestling on September 15, 2007.

In 2012, Nikki secured her first WWE Divas Championship belt after defeating Beth Phoenix on Raw. However, her reign as a champion was quite short-lived and she lost is one week later to Layla, because of her sister after a failed attempt at ‘Twin Magic’.

The Bella Twins were soon active again on Raw and started feuding with several wrestlers without any significant victory. The sisters were mostly busy with their crazy antics to entertain the audiences.

Nikki then kept fighting several opponents along with her sister, sometimes in single matches, and started a relationship with John Cena. After a mixed match, Cena proposed to her and she accepted.

Heartbreaking news sprung up on her Instagram account on April 4th, 2017 where she announced her break from professional wrestling.

Here are some of the best highlights of Nikki Bella’s career:

“Because my man is handsome and successful, that makes me a gold digger? First of all, I pay my own bills, and I still pay my own bills. But if your man is gonna give you a gift, you’re gonna accept it. I’m not gonna be like, ‘No, can you please take back the Louis Vuitton purse?’ Absolutely not.” – Nikki Bella

“I think the best time to approach a woman is actually after her workout. When you’re working out, you’re playing your jam, you’re in the groove, and you don’t want to be interrupted. So guys, wait until she’s done getting her sweat on.” – Nikki Bella

“We’re here in this women’s revolution – we’re in this women’s empowerment movement worldwide – and, if anything, women should stick up for each other and be like, ‘No, she deserves everything she has, and she’s worked hard as a woman.” – Nikki Bella

“I remember walking home one day from school, and this car pulled up behind me really slow, and it gave me a really weird feeling, and all of a sudden it skimmed me, and the man was half naked and tried to pull me into his car and saying crazy things to me. And it was terrifying.” – Nikki Bella

“We started to have more women and little girls in our audience, where it started to be 40 percent female that sat in our live audience. So I think, when that was happening and the women were stepping up and saying, ‘Hey we can do what the men do,’ and then you saw it on a reality show, it was just inevitable for us to have this women’s evolution.” – Nikki Bella

Now that you know all about Nikki Bella’s net worth, and how she achieved success; let’s take a look at some of the strongest lessons we can learn from her:

Get rid of anything that isn’t useful, beautiful or joyful.

All that truly matters, in the end, is that you loved.

Envy is a waste of time. You already have all you need.

How much is Nikki Bella worth?

Nikki Bella’s net worth is estimated to be $8 Million.

How old is Nikki Bella?

How tall is Nikki Bella?

Nikki Bella is one of only a few women wrestlers who has impacted the WWE universe.

Nikki performed on WWE under the Smackdown brand is presently inactive due to bad fitness. She made her wrestling debut when she got signed on by WWE in June 2007 and was eventually assigned to fight in Florida Championship Wrestling.

What do you think about Nikki Bella’s net worth? Leave a comment below.