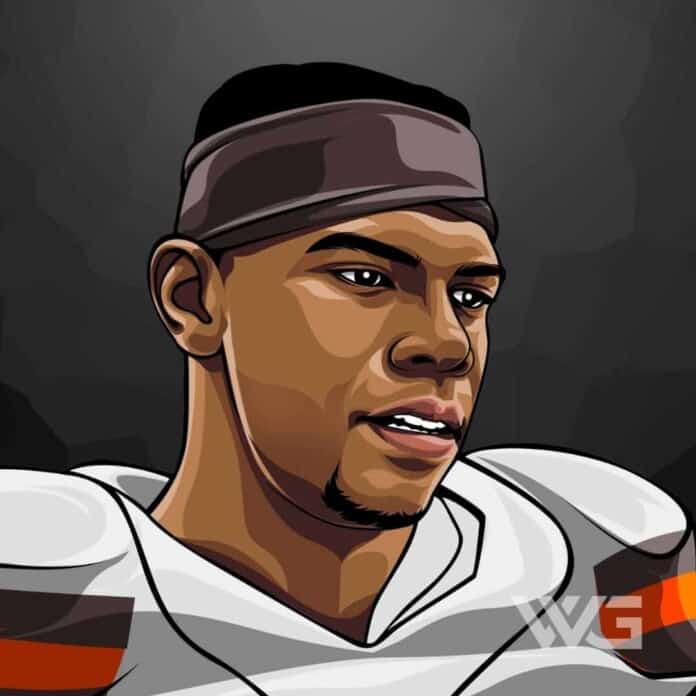 What is Terrelle Pryor’s net worth?

As of December 2022, Terrelle Pryor’s net worth is roughly $8 Million.

Terrelle Pryor is an American football wide receiver. Pryor is currently a free agent and he is considered to be the most recruited high school football-basketball athlete in southwestern Pennsylvania.

Pryor was widely regarded as the nation’s top football prospect of 2008.

Terrelle Pryor Sr. was born on the 20th of June, 1989, in Pennsylvania. He was the starting quarterback for the Ohio State Buckeyes from 2008 to 2010, winning the Big Ten championship twice.

His college career was marred by several suspensions and accusations of selling memorabilia and led to his eventual withdrawal from the university.

In 2008, Pryor threw for a freshman school-record four touchdowns and one interception in his first career start for Ohio State. Ohio State beat Troy 28–10.

Ohio State began the 2010 season second in most polls and Pryor began the season as a favorite for numerous awards. On September 25, 2010, Pryor had a break-out game in a 73–20 win over Eastern Michigan.

On December 23, 2010, the NCAA ruled that Pryor and four of his teammates would be suspended for the first five games of the 2011 season, as a sanction for selling memorabilia.

Pryor was drafted by the Oakland Raiders in the third round of the 2011 NFL Supplemental Draft.

On March 25, 2018, Pryor signed a one-year deal worth $4.5 million featuring $2 million guaranteed with the New York Jets. He played in six games, recording 14 receptions for 235 yards and two touchdowns before being released on October 20, 2018.

Here are some of the best highlights of Terrelle Pryor’s career:

“Not everybody’s the perfect person in the world. I mean everyone kills people, murders people, steals from you, steals from me, whatever. I think that people need a second chance, and I’ve always looked up to Mike Vick, and I always will.”– Terrelle Pryor

“Not everybody is the perfect person in the world. Everyone does—kills people, murders people, steals from you, steals from me. I just feel that people need to give him a chance.” – Terrelle Pryor

“It’s improved a little bit [since the end of the season], but sometimes I can have trouble making some types of cuts. It’s not really a big deal. When I’m in the game or at practice, I don’t really worry about it, to tell you the truth.” – Terrelle Pryor

Now that you know all about Terrelle Pryor’s net worth, and how he achieved success; let’s take a look at some of the strongest lessons we can learn from him:

1. Sometimes People Aren’t Meant to Be in Your Story

Sometimes the people wanted as part of your story are only meant to be a chapter.

When joy is a habit, love is a reflex.

How much is Terrelle Pryor worth?

Terrelle Pryor’s net worth is estimated to be $8 Million.

How old is Terrelle Pryor?

How tall is Terrelle Pryor?

He has won multiple honors during his high school years, including being named Pennsylvania Player of the Year twice and being chosen as the MVP of the U.S. Army All-American Bowl.

As of December 2022, Terrelle Pryor’s net worth is approximately $8 Million.

What do you think about Terrelle Pryor’s net worth? Leave a comment below.