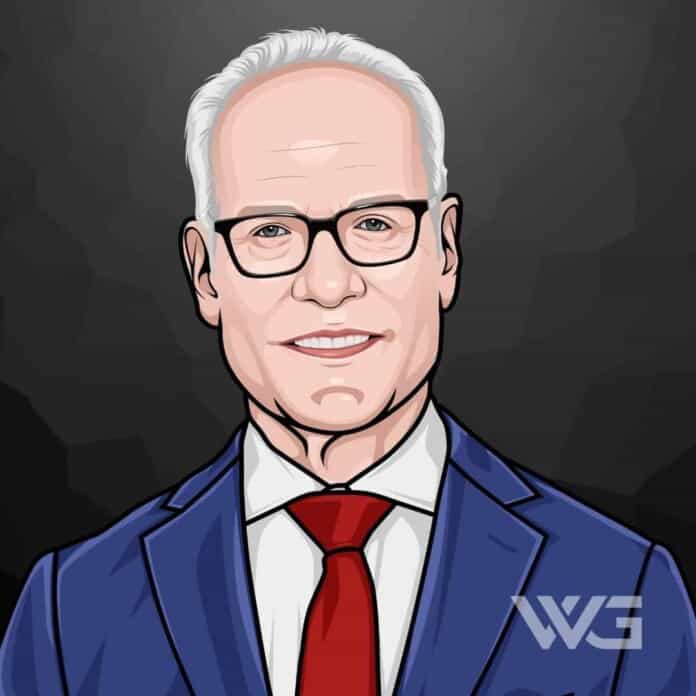 What is Tim Gunn’s net worth?

Tim Gunn is an American author, actor, and television personality.

He is best known for being a mentor to designers over 16 seasons on the reality television program ‘Project Runway.’

His father worked in the FBI, where he started as an agent but transitioned into becoming a ghostwriter and speechwriter for J. Edgar Hoover.

Gunn, gay, was raised in an intensely homophobic household where homosexuals were viewed as predators. According to a video Gunn created for the It Gets Better Project, he attempted suicide at 17 by swallowing over 100 pills.

Gunn rose to fame in 2004 when he appeared as a mentor on the first season of the fashion design-themed reality show ‘Project Runway.’ The program, hosted by supermodel Heidi Klum until 2017.

In 2014, Gunn started presenting ‘Under the Gunn,’ a reality competition series on Lifetime. Running for 13 episodes, it followed ‘Project Runway’.

Also in 2014, Gunn became the executive producer and host of the spinoff series ‘Project Runway: Junior,’ which featured a competition between teen designers. Gunn cohosted the show with Hannah Jeter, and also served as the workroom mentor to the teens.

Aside from reality television, Gunn has appeared on numerous shows as himself or a version of himself. In 2007, he played a fashion reporter in two episodes of the ABC series ‘Ugly Betty,’ and in 2009, made a guest appearance on the legal drama ‘Drop Dead Diva.’

How Does Tim Gunn Spend His Money?

Tim Gunn spends some of his money on his real estate.

Gunn lives in a beautiful 1,700-square-foot apartment in Manhattan’s Upper West Side. The space boasts warm colors and antiques throughout, including a vintage armoire, rug, and pillows.

Here are some of the best highlights of Tim Gunn’s career:

“I have heard women complain about men holding doors for them,, as if it is inherently offensive and implies that they are weak. … I would hold a door for anyone. … It has to do with noticing our fellow human beings and saying, “I recognize that you’re on this planet, and I don’t want a door hitting you in the face.” – Tim Gunn

“If I think about most of America, and maybe I’m terribly wrong…but I think most of America would say that they’re not in favor of gay marriage. But there is certainly a large cohort, not a majority but a large number of people, who are articulate and vocal and they’d rally behind this. They’re making their opinion known.” – Tim Gunn

“Just the way it never rains when you have an umbrella, you’ll never run into people if you look fantastic. But go outside in pajamas, and you’ll run into every ex you have.” – Tim Gunn

“I have a very Socratic approach – I pummel the designers with questions, so when I get them to step back from the work and look at it with me, they’ll eventually see what I see, coming to it fresh and unencumbered. That’s always very gratifying because they feel a responsibility and ownership of a solution.” – Tim Gunn

“I believe that it’s very important to get to know people with whom you can have a substantive dialogue about design and its development. In addition, read everything about fashion that you can get your hands on. A palpable point of view is what makes a designer, so you need to be confident about yours.” – Tim Gunn

Now that you know all about Tim Gunn’s net worth and how he achieved success; let’s take a look at some of the lessons we can learn from him:

Life is not a solo act. It’s a huge collaboration, and we all need to assemble around us the people who care about us and support us in times of strife.

Everyone has a best feature, so find clothes and accessories to accentuate those, whether it’s your shoulders or your long legs!

Take the high road. No matter how much strife, and consternation, frustration, and anger you might be confronted with – don’t go to that level.

How much is Tim Gunn worth?

Tim Gunn’s net worth is estimated to be $18 Million.

How old is Tim Gunn?

How tall is Tim Gunn?

Gunn is best known for his role as a mentor on the reality television series ‘Project Runway.’ His success on the show prompted two spin-off programs, ‘Tim Gunn’s Guide to Style’ and ‘Under the Gunn,’ and a handful of books.

What do you think about Tim Gunn’s net worth? Leave a comment below.