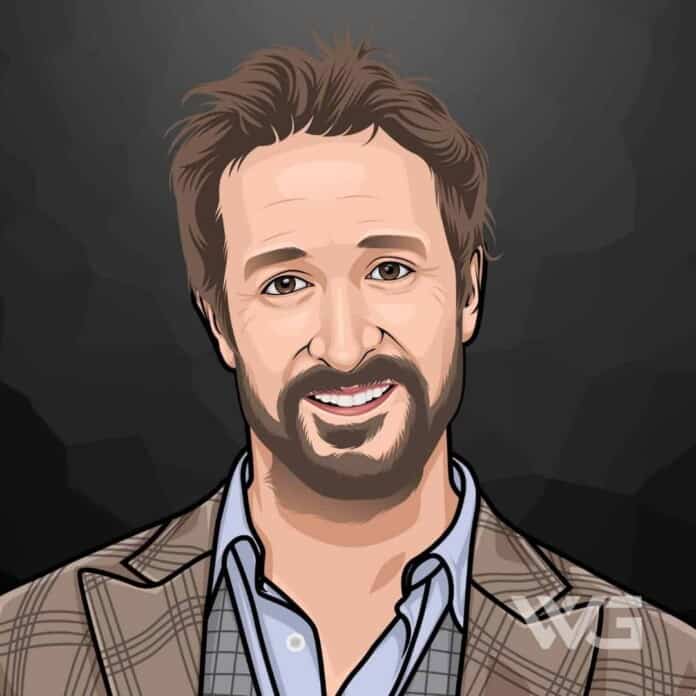 What is Noah Wyle’s net worth?

Noah Wyle is an American actor.

Wyle is best known for his role in the television series ‘ER’ which earned him nominations for three Golden Globe Awards and five Primetime Emmy Awards.

Wyle is also known for his role as Flynn Carsen in ‘Librarian franchise. He has appeared in films such as ‘A Few Good Men,’ ‘Pirates of Silicon Valley,’ ‘Donnie Darko,’ and ‘W.’

Noah Strausser Speer Wyle was born on the 4th of June, 1971, in Hollywood, California.

Wyle is the son of Marjorie and Stephen Wyle. His parents divorced in the late 1970s, and his mother later married James C. Katz, a film restorationist with three children of his own from a previous marriage.

Wyle was born in California. He first showed interest in acting while still in college as he had the chance to participate in a theater arts program at Northwestern University. After graduation, he fully dedicated himself to pursuing an acting career.

He landed his first professional role in the mini-series ‘Blind Faith.’ Shortly after, he followed his first feature film in the drama ‘Crooked Hearts’ in 1991. He put his acting skills to work in the box-office hit ‘A Few Good Men’ the following year.

Wyle rose to fame playing the role of Dr. Carter in the NBC series ‘ER’ from 1999 to 2009. He earned $9 million per season. His likable portrayal in the show also earned him five Emmy Award nominations, as well as three Golden Globe nominations for Best Performance by an Actor.

Wyle continued to impress fans with his performance as Tom Mason in the TV series ‘Falling Skies.’ Apart from his winning on-screen appearances, he is the producer of his own Los Angeles theater company, the Blank Theater Company.

The theatre mainly stages an annual young playwrights festival and most recently acquired Second Stage Theater in Hollywood, where the company has staged numerous successful productions.

How Does Noah Wyle Spend His Money?

Wyle spends some of his money on real estate and charity work.

Wyle has helped charities such as Healthy Child Healthy World, Human Rights Watch, Oceana, ONE Campaign, and Project Save Our Surf.

Here are some of the best highlights of Noah Wyle’s career:

“Our family holidays always include our animals. On Thanksgiving, we love to walk around our farm and visit with our rescued pigs, goats, horses, emus, and many other rescued animals. We give them all special vegetables that day, and the whole family enjoys a vegetarian Thanksgiving dinner. We know that the animals are giving thanks that day, and we are also giving thanks for the joy they bring to our lives.” – Noah Wyle

“If this were a Hollywood studio film, I wouldn’t have pushed my father into a table. I would have beat him up. My father wouldn’t have kissed my girlfriend; he would have raped her.” – Noah Wyle

‘”The Librarians’ is a show that really needs to have ten days, but we shoot it in seven, so the workload is really tremendous, and we don’t really quite have the budget to really give it the production value that it deserves, so we try to be as resourceful as we can.” – Noah Wyle

“I remember somebody asking me in an interview years ago if I would be interested in playing Jason Bourne. I laughed: I didn’t think anybody would want to see me run around with a machine gun. It always stayed in the back of my head that I had reacted like that. It bothered me.” – Noah Wyle

“‘ER’ was an all-consuming universe, but I don’t have a single regret. It gave me some of the greatest friendships I have and afforded me one of the rarest commodities in an actor’s life, which is the financial security to pick and choose jobs for factors besides the paycheck.” – Noah Wyle

Now that you know all about Noah Wyle’s net worth and how he achieved success; let’s take a look at some of the lessons we can learn from him:

With any project, but especially in television, Wyle always tries to look at where the character is starting from and where he’s going to end up.

Be nice to people. We all have our struggles.

Every day can be a struggle, so fight, stay hard.

How much is Noah Wyle worth?

Noah Wyle’s net worth is estimated to be $25 Million.

How old is Noah Wyle?

How tall is Noah Wyle?

Noah Wyle is an American actor and theater actor.

Wyle became a household name during the 90s, playing Dr. Carter on the television show ‘ER.’ More recently, he has worked on the ‘Librarian’ franchise, and the Steven Spielberg produced series ‘Falling Skies’ which ran from 2011 to 2015.

What do you think about Noah Wyle’s net worth? Leave a comment below.