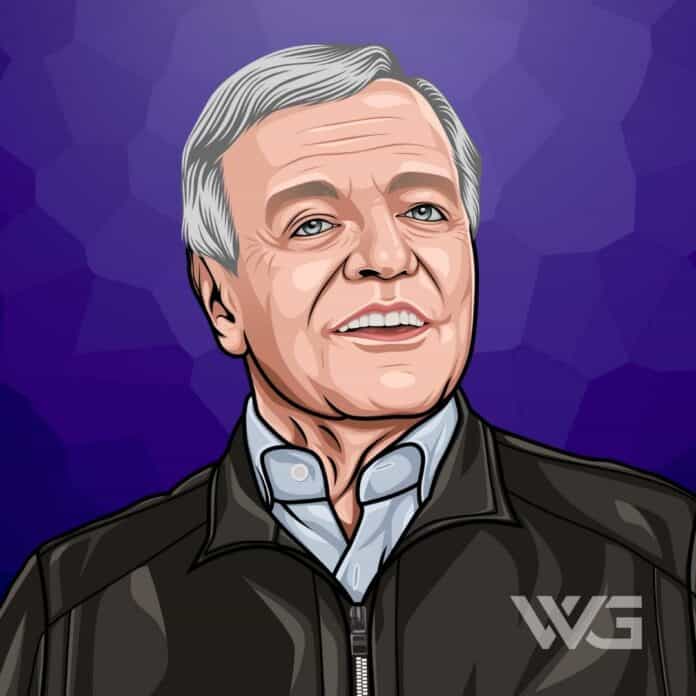 What is Tony Blackburn’s net worth?

Tony Blackburn is one of Britain’s most established and well-known DJs from the 60s and 70s.

At the beginning of his career, he worked at various pirate radio stations, moving to BBC 1 after a few years, and then, most recently, focussing on local radio and television shows.

Having spent five decades in broadcasting, Blackburn is one of the longest-running disk jockeys at the BBC. He was fired for his alleged involvement in the Jimmy Savile scandal, but was cleared of any wrongdoing, and then rehired, and is still going strong.

As of February 2023, Tony Blackburn’s net worth is estimated to be $20 Million.

Tony Blackburn was born on January 29, 1943, in Guildford, Surrey, England.

He was educated at Millfield public school and attended Bournemouth college. After college, he started his career as a singer, releasing three studio albums and fourteen singles.

Blackburn then applied as a DJ for an offshore pirate radio station called Radio Caroline and Radio London. He got the job and broadcast from 1964 to 1967 before joining the BBC in 1967.

Blackburn was the first DJ heard on BBC Radio 1 when it launched at 7 am on 30 September 1967.

At first, he mainly focused on mainstream pop but later moved to soul music. It was mainly because of Blackburn that “I’m still waiting” by Diana Ross, was released as a single in the UK, reaching number one on the music charts.

Tony Blackburn was the first disc jockey to broadcast on BBC Radio 1 and remained at the station until 1984, becoming a household name in the process.

Tony took over a mid-morning radio slot in 1973 from Jimmy Young as well as co-presenting the BBC’s summer program.

He also hosted Top of the Pops throughout the 1960s and 1970s and his weekday afternoon shows were popular throughout the UK with the Sunday Top 40 show on Radio 1 being an ongoing hit.

After Radio 1 with a national audience, Tony’s career moved on to local radio. He hosted Soul Shows on the Real Radio Network in Yorkshire, North East England, North West England, Wales, and Scotland.

He then went on to spend a few years presenting the Classic Gold Network Breakfast Show in Leicester Square, London.

He joined the Smooth Weekend Breakfast Show in 2008, as well as presenting shows on KCFM in Hull and KMFM across Kent.

Blackburn joins Jonathan Ross, Charlie Sloth, and Pete Tong as some of the BBC’s most well-loved presenters.

For Tony Blackburn, it’s never been about the money but rather about providing his listeners with the best entertainment he can provide.

Over 5 decades in the business have given Blackburn a loyal following who ensure that he is still in demand.

Tony has done extremely well for himself, making the transition from pirate radio to the BBC at exactly the right time to take advantage of the move to DJs with their own shows.

As his shows gained in popularity, Blackburn’s income rose as his celebrity grew.

With an eye on the future, he made sure to invest his earnings wisely, making the most of the burgeoning new radio medium.

Here’s a breakdown of Tony Blackburn’s annual net worth:

Cashing in on his popularity, Blackburn dipped his toe in the water of TV shows, winning “I’m a Celebrity” in 2002.

He’s also done well out of being the author of several books about music from the 1960s and 1970s.

Unfortunately, the marriage was not to last and the couple was divorced 4 years later, in November 1977.

In June 1992, he married his second wife, Debbie, a theatrical agent, and 5 years later, the couple had a daughter, Victoria, who was born in 1997.

Blackburn has two grandsons whom he dotes on. He’s been a vegetarian since the age of four and is as committed to the lifestyle now as he ever was.

Despite his long association with radio in the UK, Tony Blackburn has won very few awards and accolades over the years.

This is understandable, given his attitude towards authority and his wish to live an ordinary life.

Here are some of the more memorable moments from Tony Blackburn’s career:

Blackburn has become a legend in radio and is a household name as a result of his more than 50 years of DJ’ing and TV Show hosting.

How Does Tony Blackburn Spend His Money?

Blackburn still presents “Sounds of the 60s” on Radio 2 and looks set to keep on going for years to come. He is also surprisingly still making personal appearances with his trademark 70s and 80s show.

He lives a very unassuming life and while he might have had an eye for a fast car in the past, you certainly will not see him driving the most expensive cars in the world to his studio and back.

His taste runs more towards a cup of tea and watching the latest soap opera on TV or a spot of football. He lives in Arkley, Hertfordshire with his wife and has no plans on selling his house, ever.

Tony Blackburn has been through the ups and downs of a tempestuous career at the BBC, falling out with management and then being re-hired.

Through it all, he’s maintained a stiff upper lip, as the English of a certain class is wont to do, and he is respected all the more for it.

Here are some of the best highlights of Tony Blackburn’s career:

Tony makes an annual visit to one of Ibiza’s top clubs, just to let everyone know he’s still the best DJ.

After spending so many years behind the microphone, Toney has seen and done it all as far as radio is concerned.

He’s also learned many lessons and been guided by some of the best in the business.

Here are our favorite quotes from Tony Blackburn:

Tony Blackburn has created a place in history for himself by inventing a new genre of radio broadcast.

To do this, he had to work extremely hard and take on huge challenges to succeed.

1. Never Forget Where You Come From

Tony Blackburn has never let his celebrity status turn him into a self-indulgent individual. He is very down-to-earth and treats everyone with respect and dignity.

Blackburn never takes shortcuts, making sure that everything is planned out ahead of time.

When things didn’t go his way on the professional front, he kept pecking away at the problem to ensure that he got what he wanted.

Tony Blackburn is considered one of the BBC’s most renowned DJs and is fondly remembered for his “Top Of The Pops” shows from the late 1960s and early 1970s.

He is a frequent guest on many different television programs and appeared in “I’m a Celebrity… Get Me Out of Here!”, to much acclaim.

Blackburn continues to appear on the DJ circuit and we’re sure he’ll be competing against local radio DJs for some time to come.

As of February 2023, Tony Blackburn’s net worth is estimated to be $20 Million.

What do you think about Tony Blackburn’s net worth? Leave a comment below.