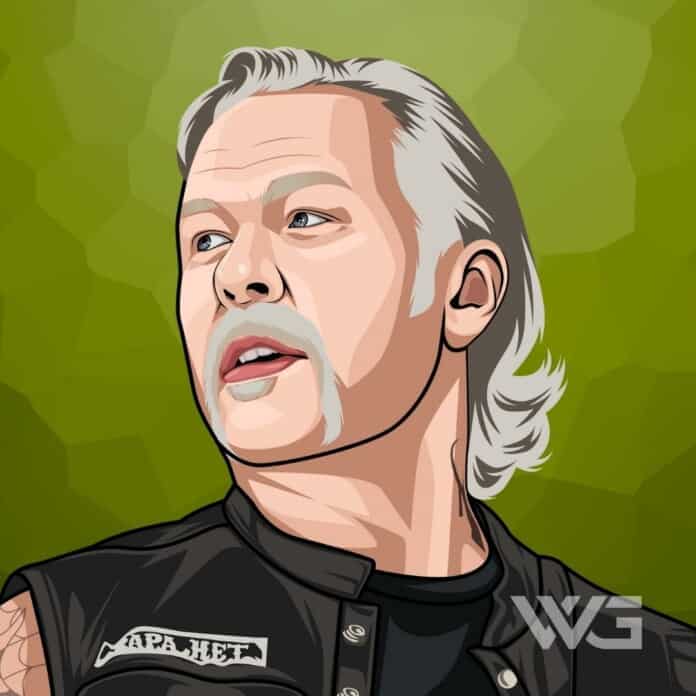 What is James Hetfield’s net worth?

James Hetfield is an American musician and songwriter best known for being the co-founder, lead vocalist/rhythm guitarist, and main songwriter for the American heavy metal band ‘Metallica’.

Metallica is the third best-selling music artist since Nielsen SoundScan began tracking sales in 1991, selling a total of 58 million albums in the United States.

James Alan Hetfield was born on the 3rd of August, 1963, in Downey, California. Hetfield is the son of Cynthia Bassett, a light opera singer, and Virgil Lee Hetfield, a truck driver.

He is of English, German, Irish, and Scottish descent. He has two older half-brothers from his mother’s first marriage and one younger sister.

Hetfield found a classified ad posted by drummer Lars Ulrich in a Los Angeles local newspaper, ‘The Recycler.’ They both got together in 1981 to form ‘Metallica,’ a heavy metal band. They were joined by guitarist Dave Mustaine and bassist Cliff Burton.

Their first album, ‘Kill ‘Em All’ (1983) reflected British metal styles of the early 1980s. Their next album, ‘Ride the Lightning,’ included social and political themes while the third album, ‘Master of Puppets,’ (1985) was considered as a masterpiece by the critics.

In 2002, Hetfield entered rehab for his drinking habits and remained away from the band for 7 months. A documentary film, ‘Some Kind of Monster,’ about the relationships among the band members and the making of the album ‘St. Anger’ was released in 2004.

Here are some of the best highlights of James Hetfield’s career:

“No secret that I enjoy motorsports and cars, in particular, building cars, building custom cars. Part of that scene. I love the flow of cars and I love the art part of them. I love the sleekness and the uniqueness of each car that you can dream up.” – James Hetfield

“Every breath I take becomes deeper, and I become more confident of myself without my crutches. The lies I’ve filled my body and soul with aren’t needed anymore. They’re not welcome. I choose to live, not just exist.” – James Hetfield

“When a man lies he murders some part of the world These are the pale deaths which men miscall their lives All this I cannot bear to witness any longer Cannot the kingdom of salvation take me home.” – James Hetfield

“Most of my guitars have been instruments that look cool. I’m not picky. I never think, ‘Oh, this neck isn’t made of ebony,’ or, ‘These strings don’t feel correct.’ It doesn’t matter too much.” – James Hetfield

Now that you know all about James Hetfield’s net worth, and how he achieved success; let’s take a look at some of the lessons we can learn from him:

2. Surround Yourself With The Right People

Protect your spirit from contamination; limit your time with negative people.

3. A failure Is An Event

Remember that failure is an event, not a person.

How much is James Hetfield worth?

James Hetfield’s net worth is estimated to be $300 Million.

How old is James Hetfield?

How tall is James Hetfield?

Metallica has sold over 145 million albums worldwide. He has been ranked as one of the top metal guitarists and metal vocalists of all time.

As of November 2022, James Hetfield’s net worth is approximately $300 Million.

What do you think about James Hetfield’s net worth? Leave a comment below.

Anthony Mundine was the highest-paid rugby player in Australia and, as a boxer, became world champion twice, ending his career with a massive fortune.