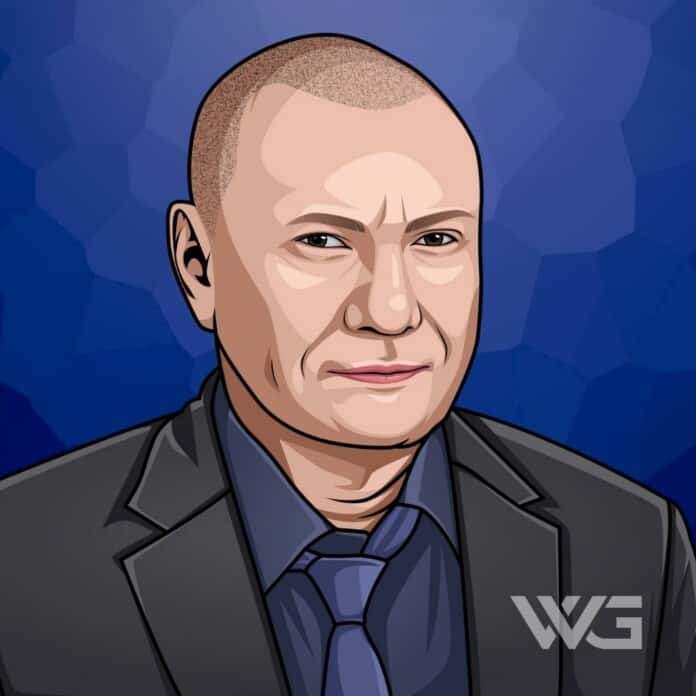 What is Vladimir Potanin’s net worth?

Vladimir Potanin is a Russian billionaire, entrepreneur, and oligarch.

Potanin acquired his wealth notably through the controversial loans-for-shares program in Russia in the early to mid-1990s. He is one of the wealthiest men in Russia. Today he has stakes in pharmaceutical company Petrovax Pharm and ski resort Rosa Khutor, near Sochi.

As of February 2023, Vladimir Potanin’s net worth is roughly $35 Billion.

Vladimir Olegovich Potanin was born on the 3rd of January, 1961, in Moscow.

In 1978, he attended the faculty of the International economic relations at Moscow State Institute of International Relations, which groomed students for the Ministry of Foreign Affairs.

Upon graduating from MGIMO in 1983, he followed in his father’s footsteps and went to work for the FTO “Soyuzpromexport” with the Ministry of Foreign trade of the Soviet Union.

From 1996 until 1997, Potanin worked as the First Deputy Prime Minister of the Russian Federation. Since August 1998, Potanin has held the positions of both President and Chairman of the Board of Directors of the Interros Company.

He has taken charge of the National Council on Corporate Governance, whose main goal is to improve the legislative regulations in Russia and introduce professional and ethical standards of corporate governance into the operations of Russian companies to boost up the reputation and investment appeal of the Russian business.

Since December 2001, he has also been a member of the Board of Trustees of the Solomon R. Guggenheim Foundation.

In 2007, he was named an Officer of the prestigious Order of Arts and Literature for his cultural contributions. The French Ministry of Culture and Communications granted the award.

As of February 2023, Vladimir Potanin’s net worth is estimated to be roughly $35 Billion.

Here are some of the best highlights of Vladimir Potanin’s career:

“Frankly speaking, I decided to become a businessman at the moment when I understood that it is possible because I grew up in a country where it was not possible. There existed even a special article in the penal code of the Soviet Union which punished entrepreneurial activity.” – Vladimir Potanin

“After I met my partner, Mr. Protherow, we decided to start a banking project, and at the same time, we started to think already about a business on a bigger scale. At the very beginning we thought more about gaining money, to have a normal life with our families, etc.” – Vladimir Potanin

“Everybody starts with creating or acquiring certain property to create the material to work with. When we started our business, we thought first of all about development, how to grow, and we managed to do this, even with all the difficulties and all the difficult rules that were implemented in Russia at that time.” – Vladimir Potanin

“For a rich and reasonably successful guy, it is impossible not to enjoy your job; otherwise, why would you spend so much time and effort doing it? I am a great fan of Norilsk, and I like this kind of challenge.” – Vladimir Potanin

“On the other hand, there is an issue of motivation and responsibility. If you inherit considerable capital, you will probably not be motivated to win your own bread, which is not good. People should be motivated. They should struggle to achieve something and properly appreciate that.” – Vladimir Potanin

Now that you know all about Vladimir Potanin’s net worth and how he achieved success; let’s take a look at some of the lessons we can learn from him:

1. Patience Is A Virtue

The reality is business owners must learn to let go of the control and surrender just as often as they need to keep working.

You need to have an insane amount of resilience. Ask any successful business owner, and they will tell you that things go wrong all the time.

3. Know When To Quit

How much is Vladimir Potanin worth?

Vladimir Potanin’s net worth is estimated to be $35 Billion.

How old is Vladimir Potanin?

How tall is Vladimir Potanin?

Vladimir Potanin is a businessman who is one of the richest people in Russia.

Potanin is best known for his own company, Interros, which is a successful holding company. Potanin acquired a stake in Norilsk Nickel during Russia’s privatization in 1995;

As of February 2023, Vladimir Potanin’s net worth is estimated to be roughly $35 Billion.

What do you think about Vladimir Potanin’s net worth? Leave a comment below.