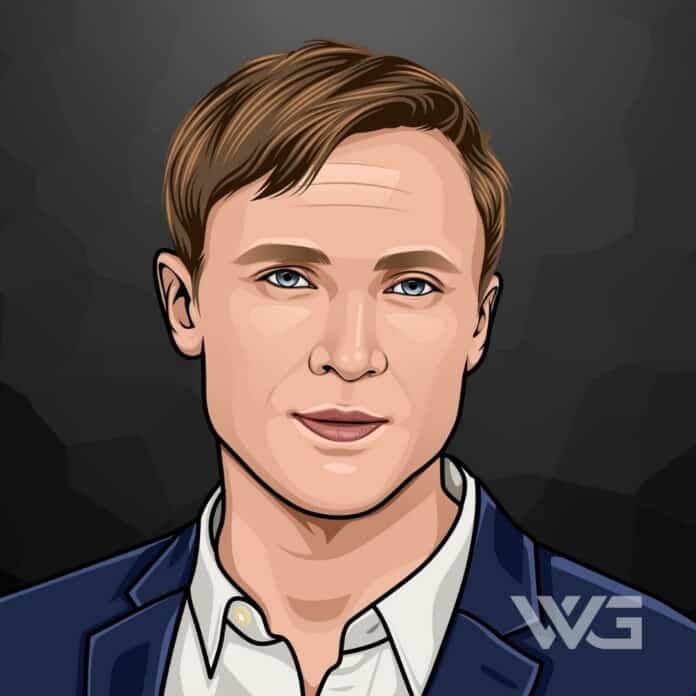 What is William Moseley’s net worth?

William Moseley is a British actor.

As of November 2022, William Moseley’s net worth is estimated to be roughly $8 Million.

William Peter Moseley was born on the 27th of April, 1987, in Gloucestershire, England. Mosley is the eldest of three children, and he is the son of Juliette E. and Peter A. Moseley, a cinematographer.

He attended Sheepscombe Primary School from 1991 to 1998.

Moseley then continued his education at Wycliffe College. He started to date the actress Kelsey Chow in 2012, which was his co-star in the movie ‘Run.’

Moseley started his career in the film ‘Cider with Rosie’ in 1998. The casting director recommended him for the role of Peter Pevensie in the movie ‘The Chronicles of Narnia: The Lion, the Witch, and the Wardrobe. He won the position 18 months later.

The film was a success, and thanks to his fantastic performance, he earned nominations for the Saturn Award for “Best Actor” and the Young Artist Award for “Best Performance” in a Feature Film.

In 2013, Moseley starred as Daniel Lombardi in the thriller ‘Run’ alongside Kelsey Chow. The following year, he starred as Anderl Gruber in the drama ‘The Silent Mountain.’

Mosley starred alongside Johanna Braddy in the movie ‘Saving Paradise’ in 2021. He plays the part of Michael Peterson, a Wall Street investment banker. Directed by Jay Silverman and written by Van Billet, ‘Saving Paradise’ is an indie film in the ilk of ‘It’s A Wonderful Life.’

As of November 2022, William Moseley’s net worth is estimated to be roughly $8 Million.

Here are some of the best highlights of William Moseley’s career:

“I remember thinking when I was younger – we used to take holidays to Spain and France, and I just thought I was never going to get further than Spain or France. I really didn’t when I was younger. And then I started auditioning for ‘Narnia,’ and the first thing when I got the part was to go straight to New Zealand, halfway around the world.” – William Moseley

“I can’t imagine myself doing something like ‘Narnia’ again. I would love to do something with Ridley Scott, you know, some action/adventure or something like that. But I’d also love to do a dramatic piece. It’s really just whatever you read and take to.” – William Moseley

“I used to not listen that much, but I’ve really learned to listen to other people and to really listen to what they’re saying. I’ve found, especially being on a film set, people have so many different stories; if you just listen, you can pick up so much stuff. I try to listen as much as I can.” – William Moseley

“‘Narnia’ has opened my eyes to a lot of things. I feel lucky that I’m able to travel; I’m not stuck in my hometown, meeting the same kind of girls and saying hi to the same people, week after week. There are so many interesting, intelligent girls out there.” – William Moseley

“What I hope is that I don’t just become ‘Peter from ‘The Lion, The Witch, and The Wardrobe.’ I want to try and do something else to be a good actor and a respected actor.” – William Moseley

“I used to love ‘The Lion, The Witch, and the Wardrobe,’ and I can still remember listening to them before I would fall asleep. I can remember the first ten minutes of the book perfectly, but whether I knew the rest of it was slightly dicier.” – William Moseley

Now that you know all about William Moseley’s net worth and how he achieved success; let’s take a look at some of the best lessons we can learn from him:

You don’t know what you have until it’s not there anymore.

The real bond and real love are something that is actually worth fighting for.

That’s a very important thing in life, to be really looked upon for the qualities which you hold in yourself and not all of the superficiality.

How much is William Moseley worth?

William Moseley’s net worth is estimated to be $8 Million.

How old is William Moseley?

How tall is William Moseley?

William Moseley is a well-established actor. Moseley was born in England, and he is best known for playing the role of Peter Pevensie in ‘The Chronicles of Narnia’ film series.

After his breakthrough in the Narnia series, he has been the star of many other movies.

As of 2021, William Moseley’s net worth is estimated to be roughly $8 Million.

What do you think about William Moseley’s net worth? Leave a comment below.

What is Will I Am's net worth? Introduction As of ...