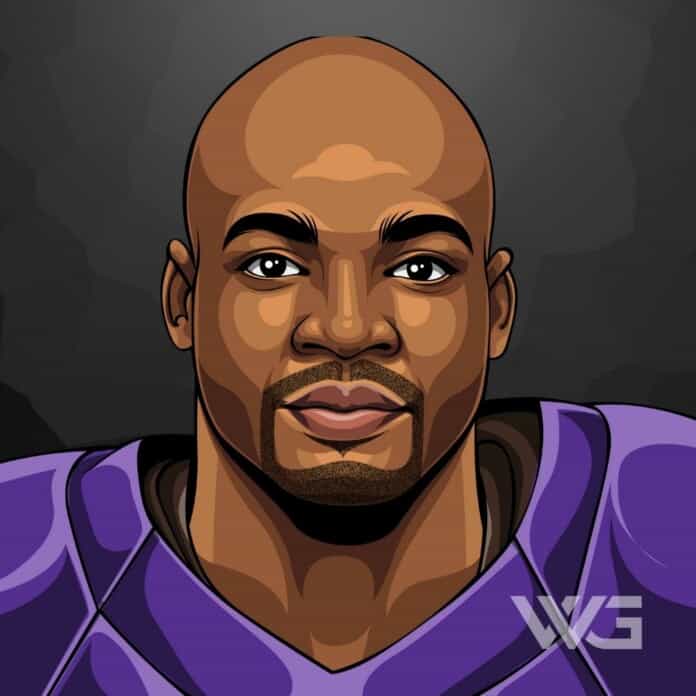 What is Adrian Peterson’s net worth?

As of February 2023, Adrian Peterson’s net worth is estimated to be $1 Million.

Adrian Lewis Peterson is an American football running back for the Washington Commanders of the NFL. Peterson was drafted by the Minnesota Vikings in the 2007’s NFL Draft.

Since then, he has become incredibly successful and he became the first freshman to finish the runner-up in the Heisman Trophy. Peterson finished his college football as the Sooners’ third all-time leading rusher.

Adrian Lewis Peterson was born in Palestine, Texas on the 21st of March, 1985. Peterson is the son to Bonita Brown and Nelson Peterson, who also were star athletes in college. His father, Nelson, was a shooting guard for Idaho.

His mother, Bonita, was a three-time Texas state champion at Westwood High School and attended the University of Houston on an athletic scholarship as a sprinter.

Adrian Peterson began his career when he entered the 2007 NFL Draft. His early college injuries did pose a slight concern for a few teams. Peterson was chosen as the first running back the same year by the Minnesota Vikings.

He later signed a contract worth 40.5 million dollars and made a phenomenal performance at the 2008 NFL Pro Bowl.

In 2009, Peterson made it to the ‘AP All-Pro’ team. He has a tremendous 25 carries, 180 yards and 3 touchdowns against Cleveland Browns. Peterson led his team and defeated the Dallas Cowboys. Unfortunately, they lost against the Saints at the NFL Championship.

The following year, Peterson made a rushing record of 5000 yards and went to represent his team in the ‘Pro Bowl’. He was known after that to be one of NFL Top 100 Players of 2011. The same year, the Vikings renewed their contract with Peterson paying him 96 million dollars, making him the highest paid running back in NFL.

In 2015, he opened the season with a knee injury and underwent a surgery to repair a torn meniscus. The same year, he made the active roster and finished six carries against the Indianapolis Colts.

Despite earning almost $100 million dollars throughout his career, Peterson has struggled with managing his finances, and is now believed to be in debt.

Here are some of the best highlights of Adrian Peterson’s career:

“Thank you to my family, my fans and fans of other teams for their support. The NFL is a fraternity of brothers and I am thankful for the tweets, phone calls and text messages from my fellow players. God Bless everyone and thank u so much.” – Adrian Peterson

“I get Tweets every day from people telling me that ‘Hey, I’m going to overcome my injury or my illness. Cancer. Different diseases. I can beat it because Adrian Peterson showed me the determination and the willpower to be able to prosper and get through adversity whenever it comes.” – Adrian Peterson

“When you think about little league football, high school, and even on to college even more so, you’re dealing with a lot of guys that are prideful, that think they’re the best – a lot of alpha males. So, typically, you’ve got to have a guy that can control those guys, and, when he talks, they know he means business. He’s a serious guy.” – Adrian Peterson

“I thought I was Superman until I experienced that life-changing anaphylactic shock. I was eating lunch and gobbled down a couple of bowls of gumbo. Then, 15 minutes later, I’m in my dorm room resting up. My eyes started itching and my throat was swelling up. I could barely breathe.” – Adrian Peterson

“With trials, you become wiser. You learn more about yourself and the people surrounding you. Me personally, I’ve never been the type of person to judge anyone over wrong-doing, no matter what it is. I’m just not a judgmental person.” – Adrian Peterson

How much is Adrian Peterson worth?

Adrian Peterson’s net worth is estimated to be $1 Million.

How old is Adrian Peterson?

How tall is Adrian Peterson?

As of February 2023, Adrian Peterson’s net worth is estimated to be roughly $1 Million.

What do you think about Adrian Peterson’s net worth? Leave a comment below.

Leon Edwards went from being one of the best amateur mixed martial artists in England to a global sensation and champion in the UFC.