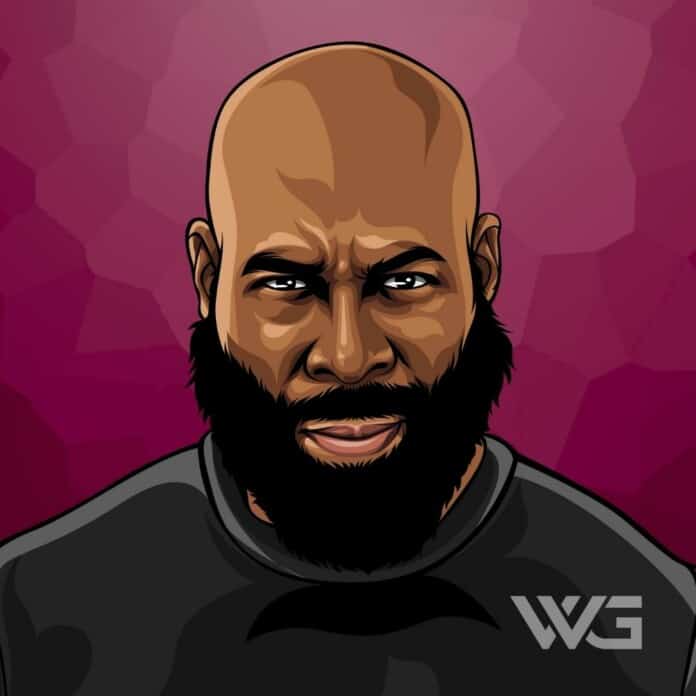 What is C.T Fletcher’s net worth?

As of November 2022, C.T Fletcher’s net worth is approximately $400 Thousand.

C.T Fletcher was born on the 8th of June, 1959, in Arkansas. During the time of his birth, his father was a field worker and his mother was a housewife. Approximately one year after his birth, he and his family moved to Watts, California and later to Compton, California, where he resided during his youth.

When he was 12 years old he acquired a job at a gas station. He joined the U.S Army when he was 18 years old. While stationed in Germany, he became interested in martial arts.

Fletcher grew up with an abusive father who at the time was preaching in a four-car garage. When he began junior high, they had moved to Lakewood, California, where his father invested in his own church. After being stationed in Germany he became interested in martial arts.

In 1979, he started to take Karate classes and earned a second-degree black belt. In 1980, he began weightlifting and bodybuilding. At first, he was interested in bodybuilding, but then powerlifting caught his interest. During the early 1990s, his marriage ended.

He met a woman while working at the post office, and in 1995, they had a child named Samson. In total, he and his wife have seven children.

Due to his work schedule, he ate a lot of fast food. This unhealthy diet caused him to become a frequent patient in hospitals, and he developed hypertension because of this diet.

At the time, he did not seem to be affected but the doctors warned him not to continue his bad habits.

In 2013, he began vlogging on YouTube. In 2016, he opened his first gym, Iron Addicts Gym in Signal Hill, California, where he resides.

Here are some of the best highlights of C.T. Fletcher’s  career:

“For the competition, always loop the thumbs around the bar and squeeeeeeze, squeeze that bar like you’re trying to snap that motherf***er in two! – CT Fletcher

“This is what we do Bulo! You ain’t No MotherF***in’ ice skater… you ain’t no tennis player… we lift weight god damn it!” – CT Fletcher

“I first started having heart problems when I was training for that contest—that the doctors told me about anyway. They told me that my heart was enlarged—they actually told me the day before that competition. I told them what I was going to try to do, and they said the strain of that much weight could cause my aortic valve to rupture. They said: “No repairing it. If it ruptures, you are going to die. And are you still planning on competing?”  – CT Fletcher

View our larger collection of the best CT Fletcher quotes!

Now that you know all about C.T. Fletcher’s net worth, and how he achieved success; Let’s take a look at some of the strongest lessons we can learn from him:

1. You Are the Master of Your Own Flesh

Every active person, or even those who started a New Years resolution to become more active understand the muscle fatigue you experience during a workout.

Your muscles become sore and tired, and this little voice in your head tells you to stop. It becomes easy to give in to this voice and allow yourself to cut the workout shut. CT, however, doesn’t listen to this voice. He commands his body to do what he wants it to, his mental strength is stronger than that little voice.

The next time you feel like giving up, remember that you are the master of your own flesh.

Excuses are easy to make, and it’s even easier once it becomes a habit. It’s hard to be great at anything and requires dedication and hard work. Very few people are willing to put in the work needed, and that’s why only a handful of people become truly great at a single craft. On any road to greatness, there is no room for excuses.

3. Records are Meant to be Broken

At the same time, don’t look at a record, or an opponent and think you could never reach that level. There is a quote in my hometown gym which reads, “Work until your idols become your rivals”.

While the goal may seem unreachable, every day you can get one step closer if you take the right steps.

In this case, there is no room for excuses. All of these lessons tie in which each other. They aren’t just for weightlifting either, they can relate to any area of life.

How much is C.T. Fletcher worth?

C.T. Fletcher’s net worth is estimated to be $400 Thousand.

How old is C.T. Fletcher?

How tall is C.T. Fletcher?

What do you think about CT Fletcher’s net worth? Leave a comment below.