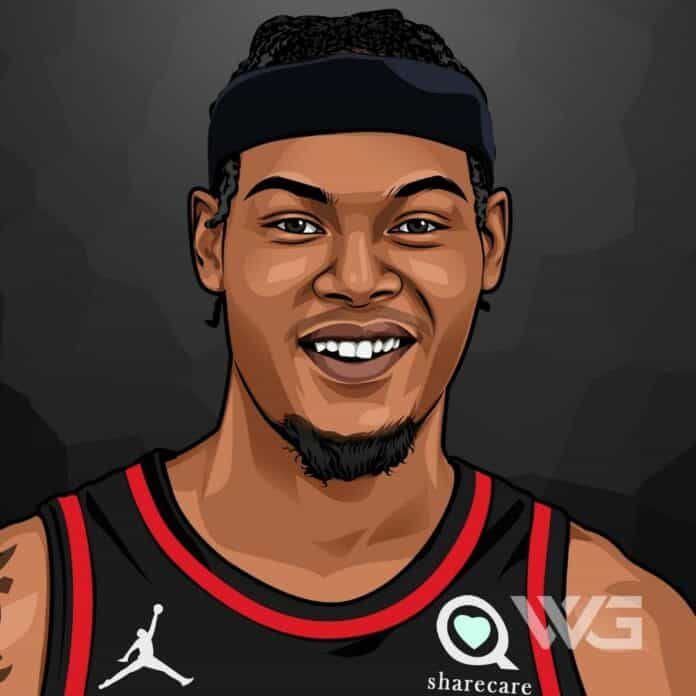 What is Cam Reddish’s net worth?

Cameron Elijah Reddish is an American professional basketball player who was initially drafted by the Atlanta Hawks in 2019.

While he hasn’t been playing in the NBA for long, he has already started making a name for himself as a solid scorer and fan favorite.

Although he’s not the most well-known player on the court currently, as he continues his career, his skills are sure to make him even more popular.

As of January 2023, Cam Reddish’s net worth is estimated to be $4 Million.

Cameron Elijah Reddish was born September 1, 1999, in Norristown, Pennsylvania, and he attended Haverford School as a freshman before transferring to Westtown School, where he played basketball with fellow five-star recruit Mohamed Bamba.

In 2017, he played for the United States men’s national under-19 team and won gold at the FIBA U19 World Cup in Egypt.

During his senior year, he was named Mr. Pennsylvania Basketball 2018 and was selected to play in the McDonald’s All-American Game, the Jordan Brand Classic, and the Nike Hoop Summit All-Star games.

As a five-star recruit, he was the third-best ranked player in the nation, and he committed to joining Duke University once he graduated high school.

At Duke, Reddish continued to distinguish himself, and by the end of his rookie year, he was named to the All-ACC Honorable Mention team.

However, after only one season at Duke, he declared himself for the 2019 NBA draft, foregoing his last three years of college basketball eligibility.

Cam Reddish was selected by the Atlanta Hawks as their 10th overall pick, and he made his official NBA debut in October 2019 against the Detroit Pistons, where he scored one point, seven rebounds, an assist, and a steal.

In 2021, he scored a career-high 34 points in a 104-98 loss to the Orlando Magic, which still remains his best single-game scoring record.

However, despite a successful two seasons with the Hawks, he was traded to the New York Knicks in 2022 in exchange for Kevin Knox and a protected first-round future pick.

Reddish made his debut with the New York Knicks in January 2022, earning two points and two rebounds in just five minutes of playtime.

Unfortunately, he was forced to sit out the rest of the 2022 season due to a shoulder injury that left him unable to be cleared for the court.

Cam Reddish may not be as wealthy as Damian Lillard, but he is certainly making decent bank as a professional basketball player.

Although he’s far from being one of the highest-paid players on the court, his annual salary has been steadily increasing, and we definitely expect him to continue earning millions as his career progresses.

Reddish is certainly increasing his wealth gradually over time, and as his desirability increases, we expect to see teams playing him more and more for his skills.

It may take him a while to become one of the richest NBA players in the world, but that goal is certainly attainable if he sticks with it.

Cam Reddish likes to keep his private life away from the public, and while he has hinted at having a girlfriend, so far, nothing has been confirmed.

Fortunately, you can still find him on his official Instagram account, where he posts pictures of his games and promotional photos he’s taken.

Reddish is also active on his official Twitter account, which he uses to interact with fans, comment on the NBA, and talk about the causes he supports.

If any more information about his personal life is made available, we will be sure to let you know. So, make sure to check back often!

How Does Cam Reddish Spend His Money?

While Cam Reddish is one of the hottest up-and-coming players in the NBA, not much is known about how he personally spends his growing fortune.

In 2021, the Reddish Family Foundation hosted a food drive in his hometown of Norristown, Pennsylvania, and he personally donated 100 turkey dinners to community members in need.

Cam also made a $10k contribution to the municipality to help them create a safe place for community members where they can play games and socialize.

Like DeAndre Jordan and Derrick Rose, Cam Reddish has enjoyed a lot of success during his time as a basketball player, both before and after turning professional.

We’ve chosen to highlight some of his greatest milestones and achievements that have helped him become as successful as he is now.

Here are some of the best highlights of Cam Reddish’s career:

Although these are only a few of his greatest accomplishments, these moments have been the most formative overall during his career.

As he continues in the NBA, he will undoubtedly continue to reach new milestones, which we will be sure to keep you updated on.

There is a lot that we can learn from Cam Reddish and his short but impressive career as a professional basketball player.

Now that you know all about Cam Reddish’s net worth, we can take a closer look at what he can teach us about building our own successful careers.

Here are some of the best success lessons to learn from Cam Reddish:

Becoming successful is something that takes a lot of hard work, and you have to be prepared to give your all — and then some — in order to achieve your biggest goals.

Fortunately, there are many great ways to prevent tiredness and fatigue, so you can consistently work hard without burning out.

No single person can do everything on their own, so it is important to surround yourself with people who can complement your own weaknesses with their strengths.

Not only can teamwork like this help you get ahead, but it can relieve the burden of having to manage everything on your own.

Learning how to deal with failure as an ambitious individual is important if you want to stay motivated when things don’t go as planned.

Everyone fails at some point, but it is how you move on from the failure that matters much more than the setback itself. Don’t let yourself become discouraged, and instead, focus on building yourself back up.

Cam Reddish is quickly becoming one of the most popular basketball players in the NBA, and his career is only just beginning.

It is very likely that he could become one of the best players on the court if he continues playing as well as he has.

Make sure to check back often so that you won’t miss any updates impacting Reddish’s ongoing career and growing wealth.

As of January 2023, Cam Reddish’s net worth is estimated to be $4 Million.

What do you think about Cam Reddish’s net worth? Leave a comment below.