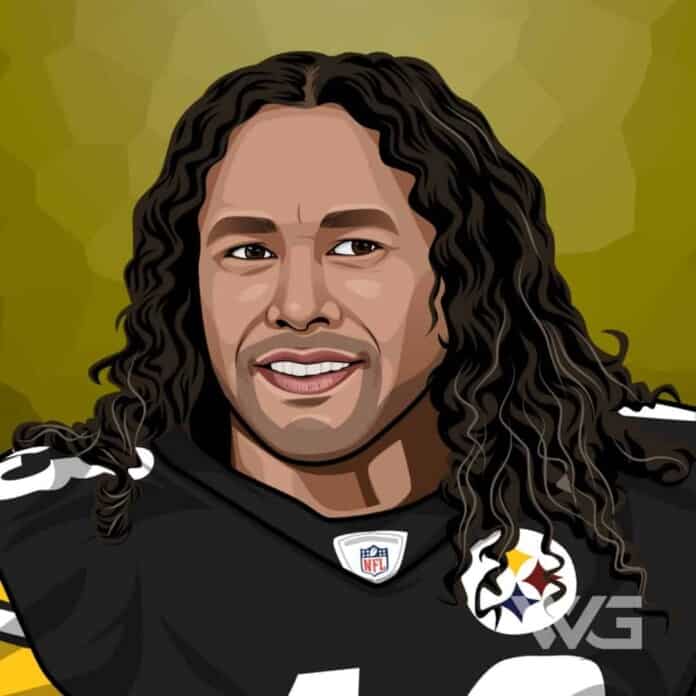 What is Troy Polamalu’s net worth?

Polamalu has played his entire twelve-year career for the Pittsburgh Steelers of the NFL. He played college football for USC. In 2003, he was chosen by the Steelers in the first round of the NFL Draft.

He was a member of two of the Steelers’ Super Bowl championship teams and was the NFL Defensive Player of the Year in 2010.

Troy Aumua Polamalu was born on the 19th of April, 1981, in Garden Grove, California.

When he was 8 years old, he vacationed in Oregon with an aunt and uncle for three weeks and begged his mother to let him live in Oregon. He later graduated from Douglas High School in Winston.

Despite playing his senior season with only four games, he was named to the 1998 Super Prep All-Northwest team, Tacoma News Tribune Western 100, and the All-Far West League second team.

Polamalu earned All-American honors during his football career at USC and has been in two Super Bowl Championship games with the Steelers, one in 2006 defeating the Seattle Seahawks and Super Bowl XLIII, defeating the Arizona Cardinals in 2009.

He has been selected for the Pro Bowl eight times.

In 2010, he was the NFL Defensive Player of the Year. Of American-Samoan descent, Polamalu petitioned the court in 2007 to change his legal name to his mother’s maiden name of Polamalu. He is married to Theodora Holmes, and they have two sons, Paisios and Ephraim.

His wife is the sister of NFL player Alex Holmes. Besides his notoriety within the NFL football league, Polamalu is best known for his long hair. In 2006, the game against the Kansas City Cheifs Chief’s running back Larry Johnson pulled Polamalu down by the hair to tackle him.

Johnson was penalized for rising to his feet while still having a hold on to his hair. In 2010, in an interview, Polamalu reportedly said he hadn’t had a haircut in “seven or eight years.” In 2013, Polamalu signed a three-year contract extension with the Steelers and entered his 11th season with the franchise.

How Does Troy Polamalu Spend His Money?

Polamalu is a proud owner of a mansion in downtown San Diego in Southern California. He purchased it for $9 million. He picked up his new 3.25-acre property for nearly a million less than the original ask of $9.9 million. It comes with a massive tennis court and a swimming pool.

Polamalu may best be known for his play in a Pittsburgh Steelers uniform. He and his wife are some of the most caring and philanthropic couples in the NFL. Their two main charitable foundations are the Troy & Theodora Polamalu Foundation and the Harry Panos Fund for Veterans.

Here are some of the best highlights of Troy Polamalu’s career:

“Anybody who’s away from what’s normal is just pushed aside as, ‘Oh, he’s crazy.’ But in reality, this world is crazy. It’s just chaos everywhere. It’s tough to be part of this world because it’s very possessed. And very egocentric.” – Troy Polamalu

“I love to create this green juice shake made from kale, spinach, cucumber, and wheatgrass. The nutrients in the juice help me recover after a tough workout. The Kale Banana Smoothie at LYFE Kitchen is very similar to my recipe and is fantastic.” – Troy Polamalu

“There’s so much that I like about Pittsburgh, actually. The cultural district and museums are wonderful, and I encourage everyone to check them out. And the food is excellent, too!” – Troy Polamalu

“I am a National Football League player of American Samoan heritage. Because of my status as a professional athlete, I have been blessed to play a role in educating players and fans about the culture and history of America’s southernmost territory.” – Troy Polamalu

“All of my Polynesian counterparts in the NFL with roots in American Samoa understand how the values embedded in our South Pacific culture – community, hard work, perseverance, respect – contribute directly to our success.” – Troy Polamalu

“In Pennsylvania, I love the Nemacolin Woodlands Resort in Farmington. It’s a scenic area. We also enjoy visiting the Laurel Highlands in Western Pennsylvania. The mountains are really something to be seen, and it’s a great area to be outside.” – Troy Polamalu

Now that you know all about Troy Polamalu’s net worth and how he achieved success; let’s take a look at some of the lessons we can learn from him:

Injury, in general, teaches you to appreciate every moment. Polamalu had his share of injuries throughout his career. It’s humbling. It gives you perspective.

Pride is tough. You go to high school, and it’s’ pride,’ ‘courage,’ it’s all these types of words that we use to motivate us.

If you look at faith in that way, you’re bound to fail at both – spiritually and in your career.

How much is Troy Polamalu worth?

Troy Polamalu’s net worth is estimated to be $40 Million.

How old is Troy Polamalu?

How tall is Troy Polamalu?

Troy Polamalu is a professional American football safety. Polamalu was born in Garden Grove, California. He is a long-standing player for the Pittsburgh Steelers.

What do you think about Troy Polamalu’s net worth? Leave a comment below.