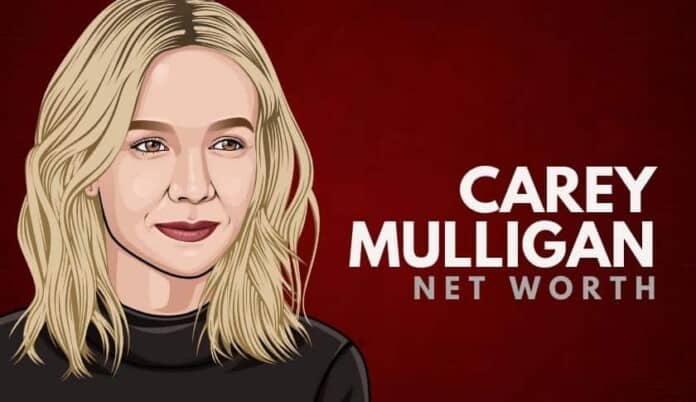 What is Carey Mulligan’s net worth?

Carey Mulligan is an English actress.

Mulligan has been receiving many awards and nominations throughout her career, such as  British Academy Film Award and a Critics’ Choice Movie Award, in addition to nominations for two Academy Awards, two Golden Globe Awards, four Screen Actors Guild Awards, and a Tony Award. She is best known for her role in ‘The Great Gatsby.’

Carey Hannah Mulligan was born on the 28th of May in London.

Mulligan is the daughter of Nano and Stephen Mulligan. Her father is a hotel manager, and her mother is a university lecturer.

When she was three years old, her father’s hotel manager work took the family to Germany. While staying there, she and her brother attended the International School of Dusseldorf. A few years later, she and her family moved back to the United Kingdom.

Mulligan started to get into acting at a very early age. After she failed to get accepted into the London drama schools she applied to she was eventually able to land an audition for ‘Pride & Prejudice’ in which she would later be cast as Kitty Bennett.

She ended up getting more and more jobs thanks to her job in ‘Pride & Prejudice.’ She had several on-stage roles before appearing in the Jane Austen adaption in 2005. She would later go on to land parts in ‘Bleak House,’ ‘My Boy Jack’ and ‘The Seagull.’

Mulligan got her first role in an independent movie in 2009. As a result, this earned her nominations for an Oscar, a SAG, and a Golden Globe.

She worked alongside Leonardo DiCaprio in ‘The Great Gatsby’ in 2013. Some of her other film credits include ‘Brothers,’ ‘Public Enemies,’ ‘Never Let Me Go’, ‘Wall Street: Money Never Sleeps’, ‘Drive’, and ‘Inside Llweyn Davis’.

Mulligan is an activist for the Safe Project which brings attention to the realities of sex trafficking. She is also the ambassador to the Alzheimer’s Society.

How Does Carey Mulligan Spend His Money?

Mulligan lives in a beautiful home in Devon. The main house is flanked by several acres of land.

Mulligan has helped charities such as Alzheimer’s Society, Oxfam, and The Justice and Equality Fund.

Here are some of the best highlights of Carey Mulligan’s career:

“Leonardo is the most incredible actor, on the planet, with a couple of people alongside him. Getting to act with him is just amazing. I walked away from my audition for that and I couldn’t believe that I’d been acting with him. I’ve worked with amazing people, but my friends freak out that I’m working with him.” – Carey Mulligan

“I was trying to find ways of not being pigeon-holed like that. Didn’t want to be tied down by my accent. I wanted to play Americans. I don’t want to ever be doing the same thing twice, and I just didn’t want to repeat myself.” – Carey Mulligan

“I’ve never been obsessed with celebrity or star-struck or anything. I met Penelope Cruz when we were in Toronto, who I think is a goddess and an unbelievable actress, and she introduced herself. As she walked away from the table I had to take a deep breath, which was strange because I’ve never had that with anyone.” – Carey Mulligan

“When you do bigger jobs there’s more attention and when you film in New York you get loads of paparazzi everywhere. It affects your work because you’re trying to think about the person you’re acting with and you’ve got 20 other lenses taking pictures of you at the same time, and it throws you.” – Carey Mulligan

Now that you know all about Carey Mulligan’s net worth and how he achieved success; let’s take a look at some of the best lessons we can learn from him:

It doesn’t matter what you feel – ultimately, it’s what the audience feels.

Remakes are a difficult thing ’cause some people feel very protective of the original.

The toughest part of acting is never a single thing. It’s more like a whole character.

How much is Carey Mulligan worth?

Carey Mulligan’s net worth is estimated to be $16 Million.

How old is Carey Mulligan?

How tall is Carey Mulligan?

Carey Mulligan is a well-established actress. Mulligan rose to fame from movie roles such as Kitty Bennett in ‘Pride & Prejudice’ and ‘The Seagull.’ She was born in London she developed a big passion for acting at a very young age.

She failed to get accepted into the drama schools she applied to be was able to land an audition for ‘Pride & Prejudice.’ One of the biggest lessons we can learn from this woman is that we should never give up on our dreams.

What do you think about Carey Mulligan’s net worth? Leave a comment below.