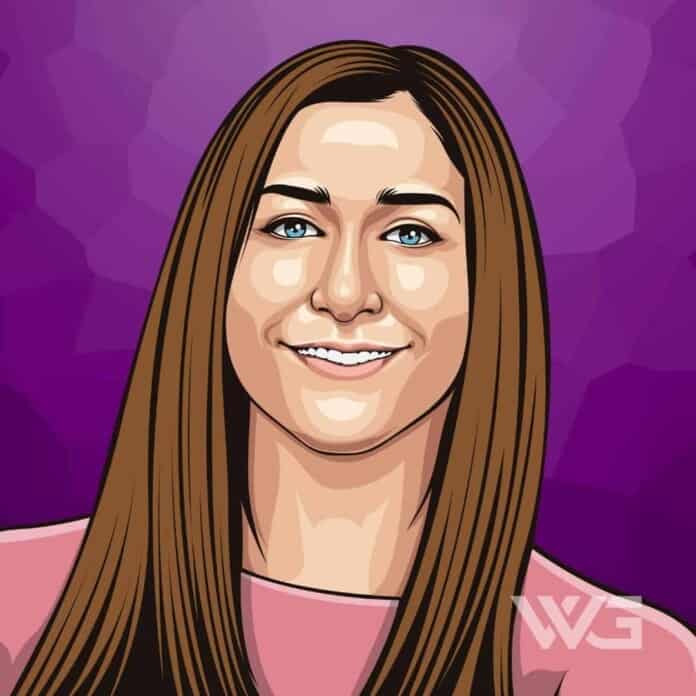 What is Chelsea Peretti’s net worth?

As of November 2022, Chelsea Peretti’s net worth is roughly $20 Million.

Chelsea Peretti was born on the 20th of February, 1978, in Contra Costa County, California. Peretti’s mother is Jewish and her father is English. She was raised in Oakland, California and she has two brothers and one sister.

Peretti attended The College Preparatory School in Oakland. She moved to New York City in 1996 to attend Barnard College, during which time she took a study year abroad in her junior year to London’s Royal Holloway, graduating in 2000.

Peretti created a short film with the comedy troupe ‘Variety Shac while in New York. She then moved to Los Angeles and appeared in the flick ‘Twisted Fortune’ in 2007.  After this, she began starring in the show ‘The Smoking Gun Presents: World’s Dumbest’.

In 2010, she guest-starred in an episode of ‘Louie’. That year, she also wrote the TV movie ‘WTF with Marc Maron’.The following year, Peretti wrote two episodes of ‘Parks and Recreation’ and ‘Funny as Hell’ respectively.

In 2013, the American beauty was cast as Gina Linetti in the TV program ‘Brooklyn Nine-Nine’. The same year, she also guest-starred in the programs ‘The Greatest Event in Television History’ and ‘Comedy Bang! Bang’.

Peretti wrote two episodes of ‘Saturday Night Live’ in 2013. She also wrote, produced and starred in ‘Kroll Show’ the same year. After this, she got featured in a number of TV shows including ‘Key & Peele’, ‘Drunk History’, ‘The Big Fat Quiz of Everything’, ‘New Girl’, ‘RuPaul’s Drag Race’ and ‘HarmonQuest’.

She has a brother, Jonah Peretti, who is the founder of BuzzFeed and co-founder of The Huffington Post. Peretti attended The College Preparatory School. Later on, she studied at Barnard College and graduated from there in 2000.

Here are some of the best highlights of Chelsea Peretti’s  career:

“It’s really irritating. Even people who like my work sometimes come up to me and say, I usually don’t like female comedians, but your material is great! It makes the job prospect more daunting. Funny is funny, you know?” – Chelsea Peretti

“My parents divorced when I was one year old so I don’t really remember any of the details, but luckily my mom does so she’s been really helpful.” – Chelsea Peretti

“I would say that I have a love-hate relationship with almost everything in my life, including stand-up.” – Chelsea Peretti

“I feel like women are frequently seen as guests in the comedy world.” – Chelsea Peretti

“I only do private room karaoke where its just me and one of my closest girlfriends. My mom always said I could really belt songs out, and the Dixie Chicks feed that encouragement.” – Chelsea Peretti

“Yeah. I and Andy didn’t really talk about what was happening personally, so I felt like we processed it all through the scenes that we had. So it wound up being very intense. And I remember thinking afterward, “That might be the longest I’ve held eye contact with Andy in my life.” It was definitely weirdly beautiful.” – Chelsea Peretti

Now that you know all about Chelsea Peretti’s net worth, and how she achieved success; let’s take a look at some of the lessons we can learn from her:

Don’t worry about what other people think because, in the end, we are all looking for people we can be our weird selves with.

2. Be Curious About the World

Try looking at the world with the eyes of a child.

3. Stop Trying to Hide Yourself So Much

You are capable of doing great things too. You have a lot to give to this world.

How much is Chelsea Peretti worth?

Chelsea Peretti’s net worth is estimated to be $20 Million.

How old is Chelsea Peretti?

How tall is Chelsea Peretti?

Chelsea Vanessa Peretti is an American actress, writer, and comedian. She is best recognized for playing the role of Gina Linetti on Fox’s ‘Brooklyn Nine-Nine’.

She is also famous for appearing in the show ‘The Smoking Gun Presents: World’s Dumbest’.

As of November 2022, Chelsea Peretti’s net worth is roughly $20 Million.

What do you think about Chelsea Peretti’s net worth? Leave a comment below.

Connie Kalitta is a champion drag racer whose mega-successful airline has made him buckets of cash.