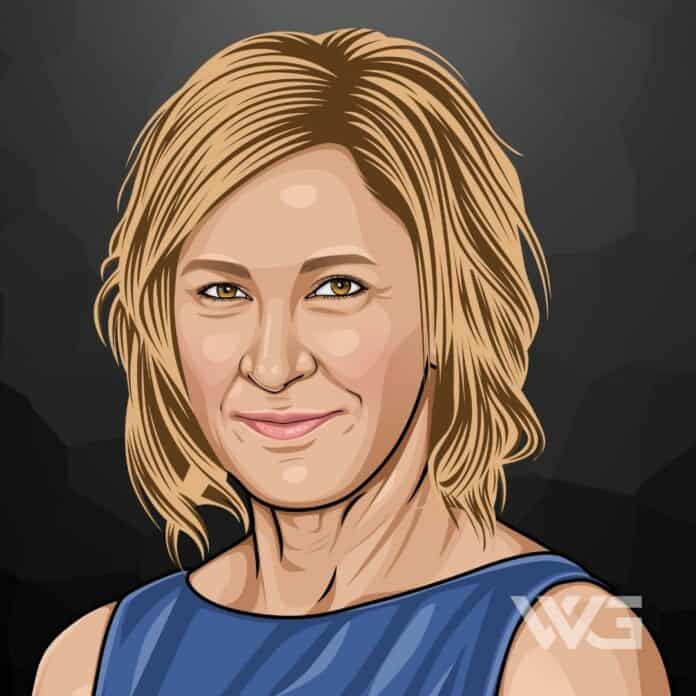 What is Chris Evert’s net worth?

Chris Evert has earned a substantial net worth as one of the most legendary female tennis players in the world.

While she may have retired in 1989, she still remains a record holder and an inspiration.

Christine Marie Evert was born December 21st, 1954, in Fort Lauderdale, Florida, to Colette and Jimmy Evert, as one of five children.

Evert’s father was a professional tennis coach, and she started taking lessons from him when she was only five years old, working her way to becoming the No. 1 ranked female player under-14 in America.

In 1969, Evert played her first senior tournament in her hometown, though she lost during the semi-finals to Mary-Ann Eisel.

Evert won the national under-16 championship in 1970 and defeated Margaret Court, who was the No. 1 player in the world at the time.

In 1971, when she was just 16, Evert made her Grand Slam debut at the US Open, though she was defeated, which ended her 46-match winning streak.

A couple of years later, Evert became the runner-up at the Wimbledon Championships and French Open, which kickstarted a 55-game winning streak that included 16 tournaments and two Grand Slams.

1976 was one of the best of her career, and it saw her win both the Wimbledon and US Open titles, the only time she would win both in the same year.

Between 1977 and 1978, Evert won two more US Open titles, and throughout her career, she came to hold the record for the most Grand Slam titles, with 18 in total.

After her last match in 1989, in which she won over Conchita Martinez, Evert remained the president of the Women’s Tennis Association until 1991, after which she founded her own tennis academy.

In 2011, Evert joined ESPN as a tennis commentator, and in 2015 she launched her own line of tennis apparel in collaboration with Tail Activewear.

As one of the richest tennis players in the world, it’s safe to say that Chris Evert has earned a significant amount of money throughout her career.

While she has never disclosed all of her earnings, we do have some information about how she’s become so wealthy.

Even though she isn’t one of the highest paid athletes in the world, Chris Evert has done well for herself, and her net worth has only continued to grow.

Evert married British tennis player John Lloyd in 1979, though after an affair with actor Adam Smith, the couple separated and ultimately divorced in 1987.

In 1988, Evert married skier Andy Mill, who had been introduced to her by Martina Navratilova, and together they have three sons, Alexander, Nicholas, and Colton.

In 2006, Evert and Mill divorced, with Evert paying Mill a $7 million settlement in cash and securities.

Evert married her third husband, Greg Norman, one of the richest golfers in the world, in 2008, but the pair separated after only 15 months, divorcing officially in 2009.

After losing her sister Jeanne to ovarian cancer, Evert underwent a preventative hysterectomy, though cancer was discovered in 2022.

Evert has since undergone chemotherapy with a 90% chance that she will remain cancer free since it has been detected early.

On her official Instagram account, Evert is incredibly active and often posts about her daily life and the events she is at.

She also has her own official website, which she uses to talk about her career, charity work, and events at her tennis academy.

Chris Evert has earned a lot of recognition for her long and successful career.

While all of her awards and accolades are impressive, some stand out more than others for their significance.

Here are some of the greatest awards and achievements from Chris Evert’s career:

Chris Evert is one of the most distinguished tennis players in history, and all of these awards emphasize just how significant her career was.

How Does Chris Evert Spend His Money?

Chris Evert has a huge net worth, and while she doesn’t flaunt her wealth, fans did get a peak inside her lavish lifestyle when she listed her Florida mansion for sale in 2018.

Outside there is an outdoor kitchen, a full-size tennis court, a golf green, a central swimming pool, two guest houses, and a nine-car garage.

Put up for sale for just over $4 million, this home certainly highlights just how impressively wealthy Chris Evert is.

Chris Evert has achieved a lot throughout her long career on the tennis court. However, some of her achievements have gained her more recognition than others.

Here are some of the best highlights of Chris Evert’s career:

While Evert reached many milestones during her time on the court, these highlights are the ones that have stood out the most to fans.

Despite being best known for her skills on the court, Chris Evert has given a lot of good advice during interviews.

Evert certainly has a lot of wisdom to share, thanks to her long and successful career!

Here are our favorite quotes from Chris Evert:

There is a lot we can learn about achieving success from Chris Evert.

Now that you know all about Chris Evert’s net worth, let’s take a close look at how she can help inspire us to achieve our own goals.

Here are some of the best success lessons to learn from Chris Evert:

Confidence is everything if you want to become successful, and it is something that you will definitely have to work at if it doesn’t come naturally to you.

If you’re not confident in what you’re doing, you can lose out on opportunities by selling yourself short and not putting yourself out there.

2. Put Your Heart Into It

If your heart isn’t in something, it will ultimately show because you’re not going to be performing at your best.

No matter what you’re doing, give it your all so that you’ll always put your best foot forward.

Things aren’t always going to go to plan, but that doesn’t mean that you should give up!

Giving up is the worst possible thing you can do, and it will never help you to achieve your goals.

Chris Evert is one of the greatest tennis players in the history of the sport, and she has earned a substantial net worth for her skills.

While she may not be on the court anymore, she is still growing her fortune as a commentator and owner of the Evert Tennis Academy.

Make sure to check back often to stay up-to-date as Chris Evert’s net worth continues to increase!

What do you think about Chris Evert’s net worth? Leave a comment below.