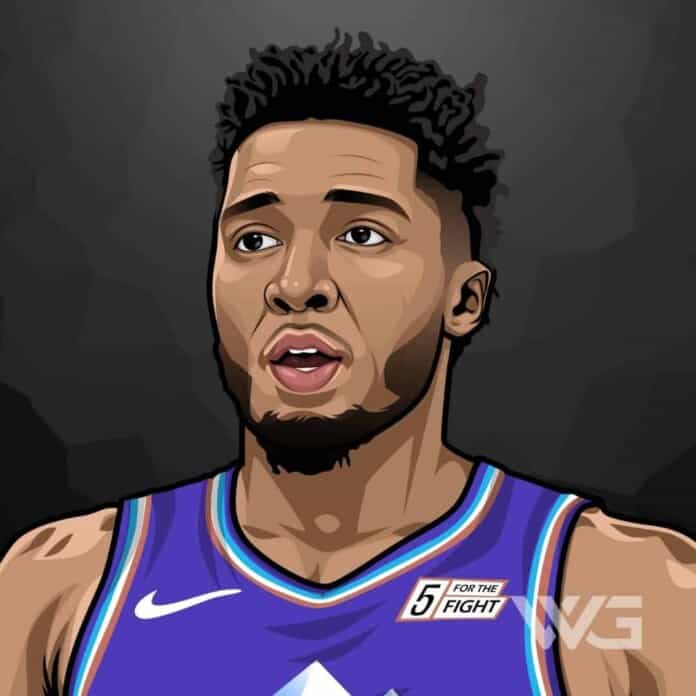 What is Donovan Mitchell’s net worth?

Mitchell plays for the Utah Jazz of the NBA. Mitchell played college basketball for the Louisville Cardinals. He was selected by the Denver Nuggets with the 13th overall pick in the 2017 NBA draft and was traded on draft night to the Utah Jazz.

Donovan Vernell Mitchell was born on the 7th of September, 1996, in Elmsford, New York.

Mitchell is the son of Donovan Mitchell Sr. and Nicole Mitchell.

Further, his star sign is Virgo. He spent his childhood along with his sister Jordan. When he was 7 years old, he looked up to Scott Kazmir and David Wright. He played AAU basketball for both The City and the Riverside Hawks programs out of New York City.

In 2010, Mitchell was present at the Boys and Girls Club of Greenwich.

Mitchell attended Canterbury School in New Milford, Connecticut, for his high school sophomore year before moving to Brewster Academy in Wolfeboro, New Hampshire, for both his junior and senior years.

Donovan was drafted by Denver Nuggets with the 13th overall pick in the 2017 NBA draft for the 24th pick (Tyler Lydon) and Trey Lyles, only to be traded in the Utah Jazz. On 5 July 2017, Mitchell signed a four-year contract for the Jazz rookie scale.

Mitchell set a rookie’s Jazz score record and became the first NBA rookie to score 40 points in a game since Blake Griffin in 2011.

He scored a season-high 38 points in a 100-89 win over the Houston Rockets in 2018. He recorded his first and only double of the season the following year.

This year, he has been named a Western Conference reserve for the 2021 NBA All-Star Game, marking his second consecutive All-Star selection.

Here are some of the best highlights of Donovan Mitchell’s career:

“I go by the 80-20 rule. So, 80 percent of the time, I’m eating healthy and focused on the right foods – fruits, vegetables, all the good stuff. Then there is 20 percent of the time where you can sneak in some other foods, like a steak. That’s not to say that steak is bad.” – Donovan Mitchell

“If you do happen to get a scholarship or get a few offers, don’t choose the school that is the biggest school. Choose the one that’s right for you. Go somewhere you’re needed, not where you’re wanted.” – Donovan Mitchell

“Of all the people in the world with incriminating evidence on me, my mom probably tops the list. She’s got all the embarrassing stories. The thing is: She doesn’t trust me, you guys. My mother does not trust me with my homework assignments. This goes way back.” – Donovan Mitchell

Now that you know all about Donovan Mitchell’s net worth and how he achieved success; let’s take a look at some of the lessons we can learn from him:

You were born to be a player. You were meant to be here. This moment is yours.

Doubt kills more dreams than failure ever will.

Never regret anything that made you smile.

How much is Donovan Mitchell worth?

Donovan Mitchell’s net worth is estimated to be $20 Million.

How old is Donovan Mitchell?

Donovan Mitchell was born on September 7, 1996, and is currently 26 years old.

How tall is Donovan Mitchell?

Donovan Mitchell is an American professional basketball player for the Utah Jazz. He played college basketball for the Louisville Cardinals. During his rookie season, Mitchell was named to the NBA All-Rookie First Team and won the 2018 Slam Dunk Contest.

What do you think about Donovan Mitchell’s net worth? Leave a comment below.