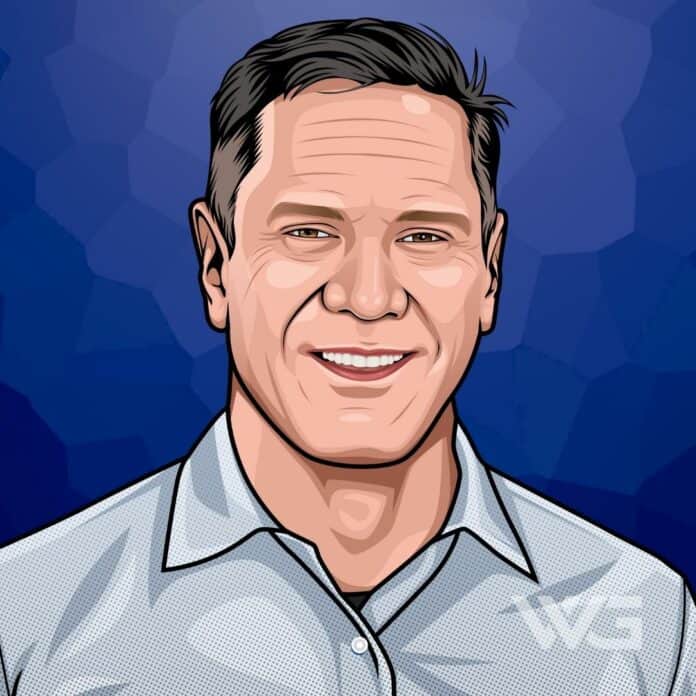 What is Drew Bledsoe’s net worth?

Drew Bledsoe was the face of the New England Patriots during his nine years with the team, and he earned a substantial net worth over the course of his career.

While he has since retired, Bledsoe continues to grow his wealth as a winery and vineyard owner.

Drew McQueen Bledsoe was born February 14, 1972, in Ellensburg, Washington, where his mother was a middle school teacher, and his father was a football coach.

During high school, Drew was coached by his father and won numerous awards, including being named Washington State Player of the Year.

Despite being recruited to colleges as far away as Miami, Drew opted to attend Washington State University, two hours away from his hometown.

While in college, Drew quickly established himself as an offensive player, and following an impressive year on the field as a junior, he decided to drop out and enter the 1993 NFL draft.

Drew Bledsoe was the first overall choice of the New England Patriots in the 1993 draft, and he started playing for them immediately in his rookie season.

Bledsoe led them through numerous victories and difficult seasons, proving himself to be both talented and dedicated.

In 2001, he signed a ten-year contract with the Patriots for $103 million, setting a record at the time.

The same year, Bledsoe led the Patriots as their starting quarterback to a victory at Super Bowl XXXVI.

However, because the Patriots had signed Tom Brady in 2000, the team ultimately decided to trade Bledsoe to the Buffalo Bills since Brady had become their go-to starter.

Unfortunately, a series of injuries hindered the team’s overall defense, and Bledsoe was released after the 2004 season.

Bledsoe signed with the Dallas Cowboys in 2005, and during his two seasons with them, he threw over 3,000 yards and helped improve their overall record.

Yet, by 2006, Bledsoe’s plays were becoming increasingly erratic, and instead of being regulated to a backup positon, he was released from his contract and announced his retirement the next year.

Even though Drew Bledsoe didn’t earn enough money to be considered one of the richest NFL players in the world, he has earned a significant amount overall.

Although we don’t know all of his annual earnings, we have some information about what he’s made over his NFL career.

Drew Bledsoe may not be as rich as Sam Bradford, but nonetheless, he has done very well for himself in the NFL.

Drew Bledsoe and his wife, Maura Healy, live in Bend, Oregon, with their three sons, Stuart, John, and Henry, and their daughter Healy.

At Summit High School, Drew coaches his sons Stuart and John, and he often travels to his hometown of Walla Walla, where his wine business is located.

On social media, Bledsoe is active on his official Instagram account, where he posts about his wine business, his family, and football.

Drew can also be found on his official Twitter account, where he primarily talks about football and his past career.

Drew Bledsoe has earned many honors and accolades during his 14 years with the NFL.

While all of his achievements are impressive, some have proved to be more significant than others.

Here are some of the most impressive achievements of Drew Bledsoe’s career:

Despite not being as well-known as Payton Manning, Bledsoe has achieved many honors throughout his career that have helped set him apart from everyone else in the NFL.

How Does Drew Bledsoe Spend His Money?

Drew Bledsoe has enough money to buy almost anything he could ever want, and fans got a glimpse of his expensive tastes when he put his mansion up for sale in 2014.

Bledsoe bought the 10 acres of land that his mansion would be built on in 2004, and construction was finalized in 2008.

This home in Oregon boasts nearly 15,000 sqft of living space, including an indoor basketball court, theater, and stone wine cellar.

While Bledsoe listed the home for $9.95 million originally, it wasn’t sold until 2020 for only $5.6 million, almost a 50% reduction from its original price.

Drew Bledsoe has reached exceptional heights to become one of the most legendary players in the NFL.

Despite reaching many important milestones, some points in his career have been more significant than others.

Here are some of the best highlights of Drew Bledsoe’s career:

Throughout his career, Bledsoe has accomplished a lot that many players could only dream of, but these high points were his most important.

Drew Bledsoe has often spoken about his career and inspired many aspiring players with his words.

Even those not looking to become pro-NFL players can find something relatable and inspiring in Bledsoe’s words.

Here are our favorite quotes from Drew Bledsoe:

There are a lot of important things about success that we can learn from Drew Bledsoe.

Now that you know all about Drew Bledsoe’s net worth, we can look at what he can teach us about reaching our goals.

Here are some of the best success lessons to learn from Drew Bledsoe:

If you’re not motivated to win, you’ll burn out and fail to reach your goals.

However, if you stay motivated to win and get ahead, you’ll find yourself in a much better place to succeed.

2. Be Prepared to Work Hard

If you’re trying to become successful, you’re going to have to be prepared to work really hard.

Nothing, especially success, comes easy, and it may take a lot of sleepless nights, but it will ultimately be well worth it in the end.

If you aren’t enjoying what you’re doing, it’s easy to start making excuses and falling behind.

While you can’t always do something enjoyable all of the time, trying to incorporate your passion into your work can be a great way to stay motivated.

Drew Bledsoe is a former NFL quarterback who has earned millions for his skills on the gridiron.

While he retired in 2007, Bledsoe has left a lasting legacy in football and continues to grow his fortune with his winery.

Make sure to check back often so that you don’t miss anything changes to Drew Bledsoe’s net worth!

What do you think about Drew Bledsoe’s net worth? Leave a comment below.

Dominican professional basketball player Chris Duarte has just started his career in the NBA, but he has already earned an astonishing milt-million dollar net worth.

Lonzo Ball is a National Basketball Association player for the Los Angeles Lakers and part of the Big Baller Brand.