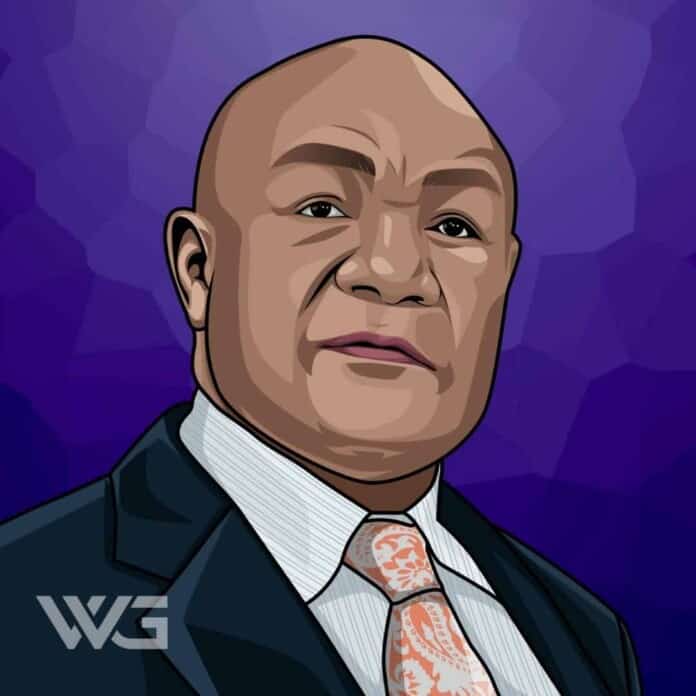 What is George Foreman’s net worth?

As of February 2023, George Foreman’s net worth is estimated to be $300 Million.

George Foreman is an American former professional boxer who competed from 1969 to 1977. He is a two-time world heavyweight champion and an Olympic gold medalist. Outside the sport, he is an ordained minister, author, and entrepreneur.

George Edward Foreman was born on the 10th of January, 1949 in Marshall, Texas. He was raised by his mother and his stepfather J.D. Foreman, whom his mother married after he was born.

As a youth he got into trouble with the law many times and got dropped out of the school at the age of 15. He was often involved in street fights and gang clashes.

In 1968, Foreman went on to win a gold medal in Olympics’ Heavyweight Boxing Championship in Mexico City. It was during this time that there were riots in the US over civil rights and Vietnam. The African-American community was still under speculation whether to support US policy or not.

The following year, Foreman decided to take up boxing professionally and went through serious and rigorous boxing training sessions.

Despite all his wins people criticized Foreman and said that he only won these matches because he fought against the has-beens.

In 1977, the course of Foreman’s life changed. Although, he won the match against Pedro Agosto in Florida, he lost to Jimmy Young in Puerto Rico.

After 10 years of keeping himself away from the boxing ring, in 1987 Foreman declared his comeback at the age of 40, surprising everyone. Despite being out of shape, he knocked out Steve Zouski in the 4th round of the match in Sacramento, California.

In 1988, he won 9 fights, notably knocking out the Cruiserweight Champion Dwight Muhammad Qawi in one of these fights.

Here are some of the best highlights of George Foreman’s career:

“The world is full of people who want to play it safe, people who have tremendous potential but never use it. Somewhere deep inside them, they know that they could do more in life, be more, and have more — if only they were willing to take a few risks.” – George Foreman

“So many of us have loved ones and people we really care about, and the only time we show affection is when they are gone. I have preached at funerals, and you see loved ones who didnt even say hello to dear ones when they were alive. Give them hugs, kisses while they are alive and need it.” – George Foreman

“In boxing, I had a lot of fear. Fear was good. But, for the first time, in the bout with Muhammad Ali, I didn’t have any fear. I thought, This is easy. This is what I’ve been waiting for. No fear at all. No nervousness. And I lost.” – George Foreman

“Its very important that people know that I really enjoy everything that has happened to me. And I tell my kids… you’re not going to be the tallest, fastest, prettiest, the best track runner, but you can be the nicest human being that someone has ever met in their life. And I just want to leave that legacy that being nice is a true treasure.” – George Foreman

Now that you know all about George Foreman’s net worth, and how he achieved success; let’s take a look at some of the lessons we can learn from him:

1. Learn How to Sell

If you want to be a successful entrepreneur you need to develop the ability to sell. Selling is not just convincing customers to buy your products or services. Selling is getting employees, media, investors, suppliers, and everyone else who is involved in your business to believe in what you’re doing.

After Foreman came back to boxing and, at 44 years of age became the oldest person ever to become champion, he started getting calls to endorse companies and become their spokesman.

During his early boxing career, people hated George Foreman inside and outside of the ring. He stormed into the ring with rage and didn’t have much finesse to his game.

Foreman was in it for the money at the start and he didn’t care what other people thought of him.

He even showed up to one fight against Muhammad Ali with an angry German Shepherd by his side to try to intimidate his opponent. But in order for him to be an effective salesperson he had to change his persona and get people to like him.

3. Keep Trying Until it Works

Foreman isn’t afraid of failing in business. He’s done everything from specialty shoes made for diabetics to a health-food restaurant chain to a reality television series.

How much is George Foreman worth?

George Foreman’s net worth is estimated to be $300 Million.

How old is George Foreman?

How tall is George Foreman?

George Foreman is the former World Heavyweight Champion who started his life from street fights and poverty but trained himself to be a world-renowned boxer.

He has been rated as one of the 25 greatest fighters of the past 80 years by The Ring magazine. The magazine also ranked him as the 9th greatest puncher of the century.

What do you think about George Foreman’s net worth? Leave a comment below.