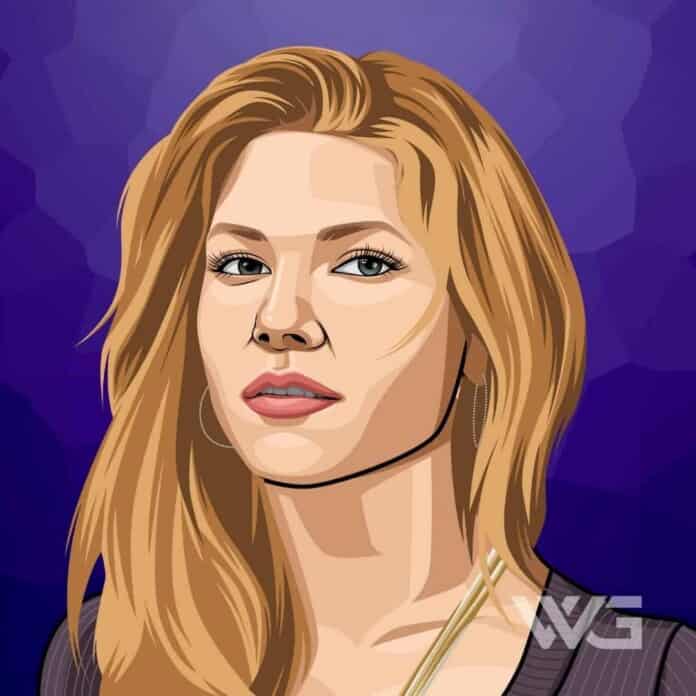 What is Katheryn Winnick’s net worth?

Katheryn Winnick is a Canadian actress from Ontario. Winnick is best known for her roles in ‘Amusement’, ‘Bones’, ‘A Glimpse Inside the Mind of Charles Swan III’, ‘Vikings’, ‘The Art of the Steal’, ‘Polar’ and ‘Wu Assassins’.

As of November 2022, Katheryn Winnick’s net worth is estimated to be $1 Million.

Katheryn Winnick was born on the 17th of December, 1977, in Etobicoke, Ontario. Winnick is of Ukrainian descent. She spoke Ukrainian as her first language and did not begin speaking English until she was eight years old.

By age 21, she had started three Taekwondo schools. She taught Taekwondo and self-defense to actors while completing her degree in kinesiology at York University, Toronto.

Winnick first appeared in the recurring role of Holly Benson in the 1999 drama ‘Student Bodies’. She then did the movies ‘Biohazardous’ and ‘Two Weeks Notice’.

Soon after this, the actress was cast in the dramas ‘CSI: Miami’ and ‘1-800-Missing’ as well as in the movies ‘50 First Dates’, ‘Satan’s Little Helper’ and ‘Going the Distance’.

The Canadian actress was then cast in the role of Hannah Burley to be played in the drama ‘Bones’ in 2010.

She also appeared in a few movies namely ‘Radio Free Albemuth’, ‘Choose’, ‘Killers’ and ‘Love & Other Drugs’ in 2010. After this, she got roles in the films ‘Stand Up Guys’ and ‘A Glimpse Inside the Mind of Charles Swan III’. In 2013, Winnick joined the team of ‘Vikings’ as Lagertha.

Two years later, she got featured in an episode of ’Person of Interest’. After this, she appeared in the short film ‘Stripped’ and the film ‘The Dark Tower’.

As of November 2022, Katheryn Winnick’s net worth is $1 Million.

Here are some of the best highlights of Katheryn Winnick’s career:

“You don’t have to be just the sex kitten. You can be a sexy, feminine woman, but also have a strong voice and be a warrior, at the same time.” – Katheryn Winnick

“I’ve always approached acting from a passion point of view. It’s what I love to do. The fact that we get paid is just a bonus.” – Katheryn Winnick

“The Norse way of speaking, no one really knew what the Vikings sounded liked, they were Norsemen. The accent is really a combination of a Scandinavian accent, maybe with a Swedish accent and an old way of speaking.” – Katheryn Winnick

Now that you know all about Katheryn Winnick’s net worth, and how she achieved success; let’s take a look at some of the lessons we can learn from her:

By choosing to suppress your feelings you are creating depression for yourself. Some people’s definition of being normal is doing what they do. Don’t let that fool you, but every day and anytime choose to be yourself.

Some people can’t congratulate you for your success, because they are waiting to celebrate your downfall.

A winner who lost something great in his life motivated him to overcome the obstacles and win.

How much is Katheryn Winnick worth?

Katheryn Winnick’s net worth is estimated to be $1 Million.

How old is Katheryn Winnick?

How tall is Katheryn Winnick?

Katheryn Winnick is a Canadian film and TV actress who is best known for her performance in the television series ‘Bones’, ‘Vikings’ and ‘Student Bodies’.

She is also recognized for appearing in many films including ‘Biohazardous’, ‘Two Weeks Notice’, ‘Going the Distance’, ‘Satan’s Little Helper’, ‘Cloud 9’, ‘Amusement’, ‘Cold Souls’, ‘Love & Other Drugs’, ‘A Glimpse Inside the Mind of Charles Swan III’ and ‘The Dark Tower’.

As of November 2022, Katheryn Winnick’s net worth is $1 Million.

What do you think about Katheryn Winnick’s net worth? Leave a comment below.