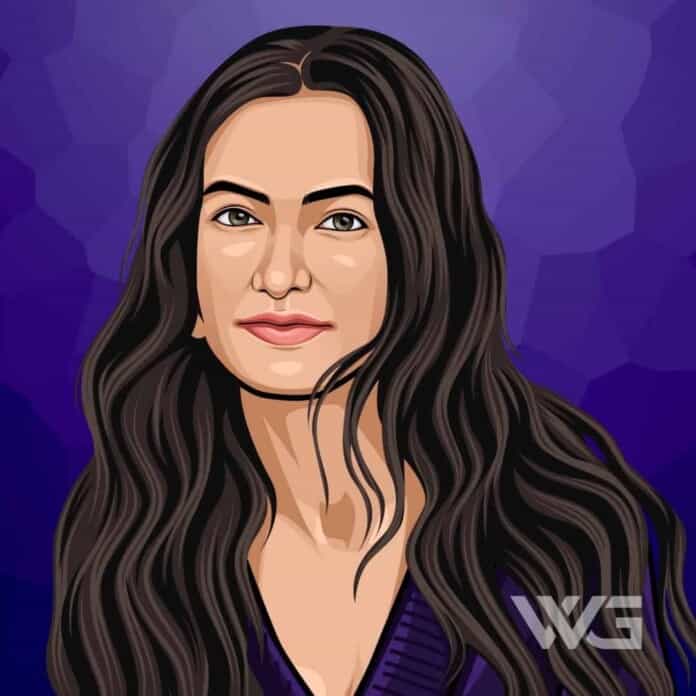 What is Cazzie David’s net worth?

Cazzie David is an American writer and actress.

David co-created and co-starred in the series ‘Eighty-Sixty.’ Her first collection of essays, ‘No One Asked For This,’ was released in 2020. David will also appear in the third season of ‘The Umbrella Academy. She regularly published on Air Mail.

Cazzie Laurel David was born in 1994, in Boston.

David is the daughter of comedian and Seinfield co-creator Larry David. Her mother is an environmental activist and film producer. She has one younger sister. David earned a Bachelor of Arts degree in writing for film and television from Emerson College.

Her dad became famous for his work for the series ‘Seinfeld,’ which won awards in both categories, best series, and best comedy writing. Her parents got married in 1993, a year before her birth. Unfortunately, due to unknown circumstances, got separated and divorced in 2007.

David appeared in an episode of the comedy American series ‘Hanna Montana.’ She used to date Pete Davidson, which is an American stand-up comedian.

She is a beautiful actress and a disciplined writer. Her writings have a comedian charm to them. David is probably best known for the mini-series ‘Eighty-Sixed,’ which is a web series.

In the short film series, she played the main female lead who has been dumped. Her life continues as she starts to enjoy and see life differently and with a fun element to it.

In 2019, David wrote along with Elisa Kalani ‘Half-Empty’, a TV comedy movie. It portraits a college senior girl with an overactive imagination who finds herself in a series of mishaps.

David has also worked on the series ‘CollegeHumor Original’ from 2006 for few episodes as a student. Her comedy film, ‘Stealing Pulp Fiction,” is in the post-production phase. Fans have high hopes for her.

Even though much of her work has been on a low budget, such as ‘Eighty-sixed,’ she still hasn’t won or even been nominated for any inconveniences of her projects.

Here are some of the best highlights of Cazzie David’s career:

“As soon as I walk outside, I get depressed. If I see a dog, I’ll get upset about how much it must suck to be on a leash. I’ll get on a bus and tear up at the thought of how the driver has to go back and forth on the same street for eight hours in mind-numbing traffic.” – Cazzie David

“All I want in life is to pet my dog and cat. After that, all I want to do is post photos of them. Mostly because they’re the cutest things ever, but also because I don’t have to worry about how ugly I look in the photo.” – Cazzie David

“So, I found my neuropsych evaluation last year when I was going through my mom’s things. I opened up a file drawer, and there was a folder labeled “Cazzie,” which is very Gossip Girl. I pulled it out. In the midst of all these failed report cards was this psych evaluation that I remember doing the testing for, but I didn’t know she had kept the evaluation.” – Cazzie David

“What is the harm in endlessly scrolling past Ben Affleck and Ana de Armas getting coffee? Is that how I want to spend my time? Definitely not, but there’s something less toxic about it, I guess than other apps. How do you think they choose which celebrity they’re going to post getting coffee?” – Cazzie David

“If you and I went to Nobu Malibu together, we would look so out of place. We would be looking around the whole time like two deer. But by about week three of the pandemic, I became obsessed with that kind of behavior.” – Cazzie David

Now that you know all about Cazzie David’s net worth and how she achieved success; let’s take a look at some of the lessons we can learn from her:

People so often forget that their Instagram is more than just their latest post. Before posting, step back and look at the bigger picture.

Never forget when posting something on Instagram that it lasts forever. Instagram is embarrassing enough as is, so be careful. A post might not embarrass you at this moment, but it’s likely to in the future. So don’t only think about yourself; think about your future self.

You want to have the perfect balance of hot and funny on your Instagram, but you never want too much of either… Don’t try to add humility to your blatant ‘hot’ posts through a half-hearted attempt at being funny.

How much is Cazzie David worth?

Cazzie David’s net worth is estimated to be $10 Million.

How old is Cazzie David?

How tall is Cazzie David?

Cazzie David is an American actress and writer. David is best known for the web series ‘Eighty-Sixed’ and for being the daughter of Larry David. She is also the ex-girlfriend of Pete Davidson. She graduated from Emerson College and authored the book ‘No One Asked for Thus: Essays’.

David starred as Remi on the series ‘Eighty-Sixed,’ which she also created, wrote, and executive produced. She also appeared in an episode of the TV series ‘Hannah Montana’ in 2007. David dated Pete Davidson from 2016 to 2018.

What do you think about Cazzie David’s net worth? Leave a comment below.