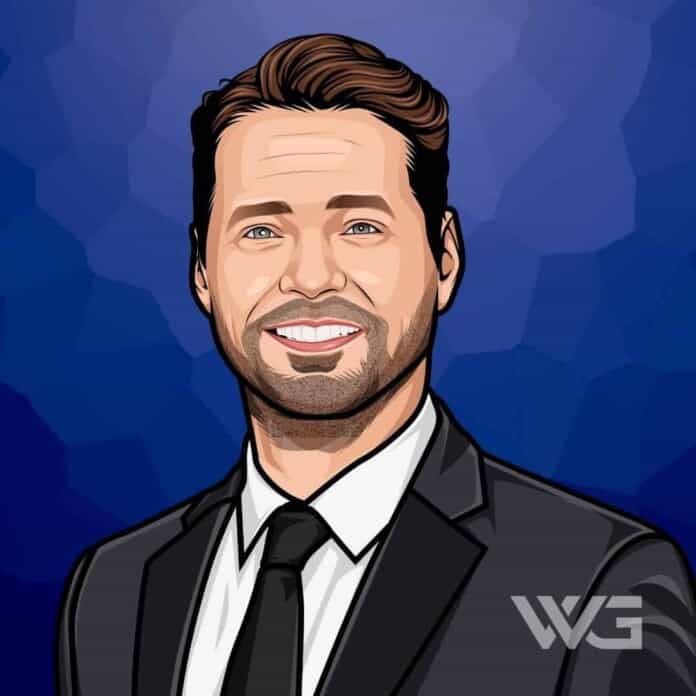 What is Jason Priestley’s net worth?

Jason Priestley is a Canadian-American actor and director.

Priestley is best known for the television series ‘Beverly Hills, 90210’. He is also known for the show ‘Call Me Fitz’ and for his role as Matt Shade in the Canadian series ‘Private Eyes.’ He started his career in television commercials in his native Canada before he moved to Los Angeles in 1987.

Jason Bradford Priestley was born on the 28th of August, 1969, in North Vancouver, Canada. His mother was an actress and acting coach.

Priestley is a graduate of Argyle Secondary School in Vancouver. He has a sister who also is an actress. He also has two step-siblings. In 2007, he became a naturalized American citizen.

Priestley began his acting career doing commercials for companies such as ‘Fletcher’s Meats.’ In 1990, he was chosen to play Brandon Walsh on the series Beverly, 90210′. The show garnered worldwide fame and popularity.

He was nominated for two Golden Globes for his work on the show. He directed 15 of the show’s episodes. Priestley remained on the show until 1998.

During 2004 and 2005, he joined the cast of ‘Tru Calling.’ He was a regular on the program ‘Love Money’ in 2006. His television work also includes the WB show ‘What I Like About You.’ He has made several films, and his most notable role is in ‘Love and Death on Long Island.’

In 2007, Priestley returned to series television as one of the lead males in ‘Side Order of Life.’ He made a guest appearance on the NBC’s ‘My Name Is Earl.’

Priestley appeared in Canadian Stage’s production of ‘Race’ in 2013. Two years later, he starred alongside Gael Garcia Bernal in ‘Zoom.’ He began starring in the Global TV Network series ‘Private Eyes’ in 2016. The same year, he was inducted into Canada’s Walk of Fame’.

How Does Jason Priestley Spend His Money?

Jason Priestley spends some of his money on charity work.

Priestley has done some charity work throughout his career. Some of the charity organizations he has supported are American Foundation for AIDS Research, Children Affected by AIDS Foundation, and Waterkeeper Alliance.

Here are some of the best highlights of Jason Priestley’s career:

“One of the fun things about being an actor is stepping outside yourself and outside of your own experience. It’s challenging yourself to totally commit to something that in your core is so wrong.” – Jason Priestley

“When you say ‘90210,’ everyone knows what you’re talking about. So why not make use of that? And they certainly have. I think the show looks beautiful, and all the actors are doing a great job. It’s a tangled web they’ve created thus far. It’s great.” – Jason Priestley

“If people think I am gay, yeah, hey, that doesn’t bother me. Not at all. What would people think? To me, I am such a heterosexual guy. It doesn’t even, and I don’t even think about it.” – Jason Priestley

“I think it’s great now that we seem to be in an era where it’s OK to be gay, and I think that the society in North America has had more of a problem with it than any other society.” – Jason Priestley

“Well, I’ve been a professional racer for nine years. And if I could get it to pay me as much as acting, I’d give up all the rest in a second. Working in television, however, has made me accustomed to a certain lifestyle that I’d like to maintain.” – Jason Priestley

“It’s a much more dangerous world for a young famous person now, and it’s mayhem. You can understand why so many of them have bodyguards. But the new 90210 kids wouldn’t get away with a fraction of the off-set behavior he and his co-stars did either, I suggest. “That’s not my problem – that’s Bieber’s problem. I’m 44 years old, happily married with two beautiful kids.” – Jason Priestley

Now that you know all about Jason Priestley’s net worth and how he achieved success; let’s take a look at some of the lessons we can learn from him:

You never appreciate your anonymity until you don’t have it anymore.

One of the fun things about being an actor is stepping outside yourself and outside of your own experience. It’s challenging yourself to totally commit to something that in your core is so wrong.

Never categorize yourself. Society does that to you, don’t do it to yourself.

How much is Jason Priestley worth?

Jason Priestley’s net worth is estimated to be $12 Million.

How old is Jason Priestley?

How tall is Jason Priestley?

Jason Priestley is a Canadian-American actor. Priestley is best known for playing the role of Brandon Walsh on the television series ‘Beverly Hills, 90210′ for which he received two Golden Globe nominations for. He began his career in television commercials.

After guest appearances on shows such as ’21 Jump Street,’ ‘MacGyver’ and’ Quantum Leap,’ Priestley landed a recurring role as an orphan on the short-lived sitcom ‘Sister Kate.’ He has starred in movies such as ‘Tombstone,’ ‘Calendar Girl,’ and ‘Love and Death on Long Island.’

What do you think about Jason Priestley’s net worth? Leave a comment below.