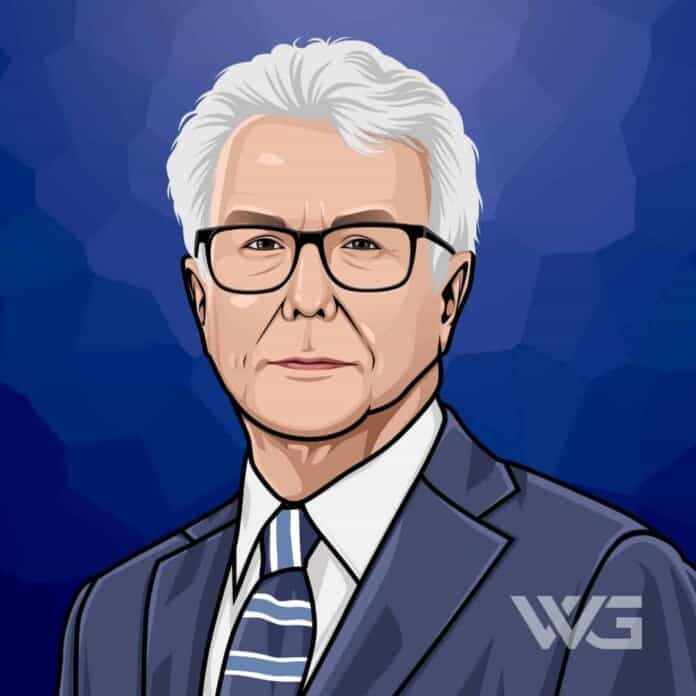 What is Ken Follett’s net worth?

Ken Follett is a Welsh author of thrillers and novels.

Follett has sold more than 160 million copies of his works. Many of his books have achieved high rankings on bestseller lists.

In the U.S, many of his books have reached the number one position on the New York Times Best Seller list, including ‘Edge of Eternity,’ ‘Fall of Giants,’ ‘A Dangerous Fortune,’ ‘The Key to Rebecca,’ ‘Lie Down with Lions, Triple,’ ‘Winter of the World,’ and ‘World Without End.’

Kenneth Martin Follett was born on the 5th of June, 1949, in Cardiff, Wales.

Follett was the first child of Martin Follett and Lavinia Follett. He developed an early interest in reading but remained an indifferent student until he entered his teens.

His family moved to London when he was 10 years old. He then started to study at Harrow Weald Grammer School and Poole Technical College.

In 1967, he won admission to University College London, where he studied philosophy.

Follett developed an early interest in reading growing up. After he graduated from University College London, he took a post-graduate course in journalism.

He also worked as a trainee reporter, and he then became a general assignment reporter for the Evening News.

He later became the deputy managing director of Everest Books.

The publication of his book ‘Eye of the Needle’ gained him notoriety and wealth in 1989. He has written 29 books, and he started with thrillers.

He has sold over 130 million copies of his work. His genres include thrillers and historical fiction. He has been made an Honorary Doctor of Literature by three universities.

Here are some of the best highlights of Ken Follett’s career:

“In my books, women often solve the problem. Even if the woman is not the hero, she’s a strong character. She does change the plot. She’ll often rescue the male character from some situation.” – Ken Follett

“Nevertheless, the book gave Jack a feeling he had never had before, that the past was like a story, in which one thing led to another, and the world was not a boundless mystery, but a finite thing that could be comprehended.” – Ken Follett

“We’re all good when it suits us, he used to say: that doesn’t count. It’s when you want so badly to do something wrong—when you’re about to make a fortune from a dishonest deal, or kiss the lovely lips of your neighbor’s wife, or tell a lie to get yourself out of terrible trouble—that’s when you need the rules.” – Ken Follett

“President Wilson says a leader must treat public opinion the way a sailor deals with the wind, using it to blow the ship in one direction or another, but never trying to go directly against it.” – Ken Follett

“Ethel said: “Lloyd, there’s someone here you may remember-” Daisy could not restrain herself. She ran to Lloyd and threw herself into his arms. She hugged him. Looked into his green eyes, then kissed his brown cheeks and his broken nose and then his mouth. “I love you, Lloyd,” she sad madly.” – Ken Follett

“I aim to be translucent, so you don’t notice the words, just their meaning. Haven’t much insight into people’s motivations.” – Ken Follett

Now that you know all about Ken Follett’s net worth and how he achieved success; let’s take a look at some of the lessons we can learn from him:

The research is the easiest. The outline is the most fun. The first draft is the hardest because every word of the outline has to be fleshed out. The rewrite is very satisfying.

For success, the author must make the reader care about the destiny of the principals and sustain this anxiety, or suspense, for about 100,000 words.

Well, for people who want to write bestsellers, the best advice Follett can give is to say that the novel has to engage the reader emotionally.

How much is Ken Follett worth?

Ken Follett’s net worth is estimated to be $55 Million.

How old is Ken Follett?

How tall is Ken Follett?

Ken Follett is a Welsh author is known for his thrillers and suspense novels, including ‘The Eye of the Needle,’ ‘Whiteout,’ ‘The Key to Rebecca’, and ‘World Without End’.

Today, he has sold nearly 100 million copies of his books worldwide.

He is an eminent and honored author of suspense and thriller novels. Some of his novels have been ranked at the first spot on the New York Times bestseller list.

What do you think about Ken Follett’s net worth? Leave a comment below.