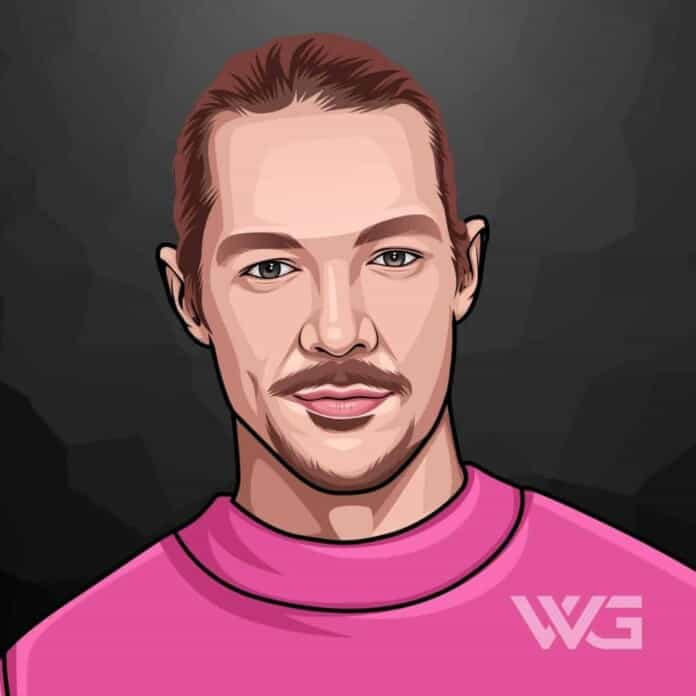 What is Diplo’s net worth?

Diplo is an American DJ, songwriter, and record producer.

He is the co-creator and lead member of the dance hall music project Major Lazer. He founded and manages record company Mad Decent as well as co-founding the nonprofit organization Heaps Decent.

Diplo has worked as an English teacher in Japan and a school teacher in Philadelphia.

As of December 2022, Diplo’s net worth is estimated to be roughly $50 Million.

Thomas Wesley Pentz was born on the 10th of November, 1978, in Mississippi.

He was raised in a family with English and German heritage. He spent the majority of his childhood growing up in Miami.

After he graduated from high school, he attended the University of Central Florida. He became the DJ for a local radio station during his college years. After he relocated to Philadelphia, he became much more successful and renowned as a DJ after connecting with DJ Low Budget.

Diplo and DJ Low Budget started to release their own mixtape in 2000. Both DJs became well known throughout the local and national scene. Diplo released a debut solo album titled ‘Florida.’ He later followed up with a DVD called ‘Banned in Libya,’ exploring a sub-genre known as “favela funk.”

Diplo became more and more successful, and he started to work with singer M.I.A. After working together with her on a mixtape, he released ‘Piracy Funds Terrorism Vol.1’. Diplo, DJ Switch, and M.I.A. came together to create the Grammy-nominated song ‘Paper Planes.’

He then went on to work with artists like Bruno March, Kid Cudi, Die Antwood, and more. He established the record label Mad Decent and toured with Steve Aoki in China.

Diplo began working with more artists such as Lil’ Jon, Gucci Mane, Rusko, and many others. Some of his most notable production credits are with Justin Bieber, Lil Wayne, Travis Porter, Usher, and Britney Spears.

In 2011, he co-created Major Lazer along with Swith. Major Lazer’s first album was known for its heavy Jamaican dancehall influences and received worldwide critical acclaim.

How Does Diplo Spend His Money?

Diplo has a lot of money, and with his money, he likes to spend it on different things. He is a proud owner of two beautiful homes, and he also has a stake in an American soccer team.

Diplo purchased Kid Rock’s former house in Malibu in November 2020. Diplo paid $13.2 million. He is also a proud owner of a 2,500-square-foot Hollywood Hills home he bought in 2016.

Diplo has purchased a stake in an American soccer team.

Here are some of the best highlights of Diplo’s career:

“All over the world, kids and women [are] getting killed right now over beliefs, this is silly to get angry over. If it bothers you, just don’t attend. I’m down for anything positive, but this doesn’t affect our parties too much. I’m not the promoter, I actually had nothing to do with the rules being implemented, but I agree with my team. And the cause of who I am, I’m the de facto speaker. I have thick skin, so u guys that consider yourself PLUR can attack me all you want. It doesn’t bother me. I’m just here for the music.” – Diplo

“It sucks for me because now I have to not be as crazy as I am on the Internet. Which totally sucks because it’s not going to be fun anymore. But the repercussions are really bad. Like, Taylor Swift fans are really crazy. They threatened to murder me and stuff. It’s really bizarre and disgusting. They’re the worst people in the world.” – Diplo

“Selling MP3s or physical copies, it’s still cool, but I think it’s slowly becoming outdated to where people just want to build a culture. The culture’s what you’re selling at this point.” – Diplo

“Gucci is a rapper that doesn’t try and be anything he’s not – he’s straight up. Yeah, maybe it’s ironic and all, but I’m just a fan and have been one since day one. Gucci Mane is the cool uncle I never had, even though I’m sure I’m probably older than him.” – Diplo

“When I worked with M.I.A., who was, like, the coolest person back then, she was just a girl I met on the Internet. Or even when I met Azealia Banks on Myspace, I never thought, ‘Oh, she’s cool.’ I just loved what she was doing. So I’ve always been like that. And I think, as a producer, that’s what you’ve gotta do.” – Diplo

Now that you know all about Diplo’s net worth and how he achieved success; let’s take a look at some of the lessons we can learn from him:

You can never figure out what the future sounds like. As soon as you make it, it’s the past.

You have to do; you can’t live by the rules of what you’re supposed to do. Diplo thinks every person is good at something, and you have to push that forward.

Do new things because if you stay behind and fight the future, you are just going to be left behind.

How much is Diplo worth?

Diplo’s net worth is estimated to be $50 Million.

How old is Diplo?

How tall is Diplo?

Diplo is an American DJ and producer who is best known for co-creating, Major Lazer. Over the years, he has also worked with artists such as Skrillex, M.I.A, Mark Ronson, Gwen Stefani, Britney Spears, Madonna, Justin Bieber, Chris Brown, and more.

His name ‘Diplo’ is short for “Diplodocus,” which references his childhood obsession with dinosaurs.

As of December 2022, Diplo’s net worth is estimated to be roughly $50 Million.

What do you think about Diplo’s net worth? Leave a comment below.