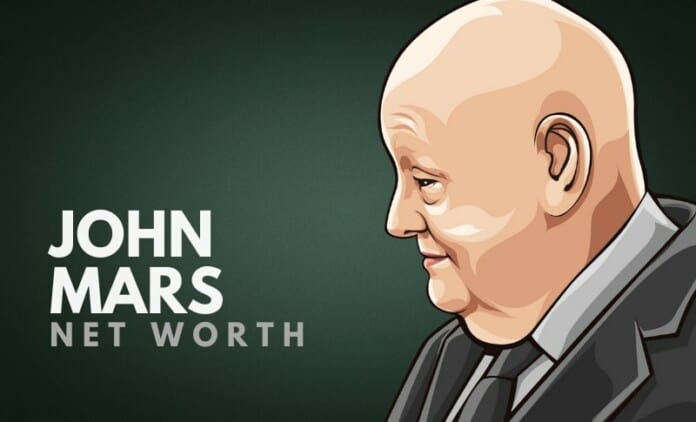 John Franklyn Mars is an American businessman from Virginia. Mars and his sister Jacqueline are heirs to the Mars Bar fortune.

John Franklyn Mars was born on the 15th of October, 1935, in Virginia. He is the son of Audrey Ruth (Meyer) and Forrest Mars, Sr., and grandson of Frank C. Mars, founders of the American candy company Mars, Incorporated.

Mars graduated from the Hotchkiss School in Lakeville, Connecticut in 1953, and Yale University.

As a member of the Mars family, his share of the company and other assets were worth US$10 billion in September 2010, making him the 52nd richest person in the world and the 26th richest person in America, according to Forbes.

Mars has accumulated that impressive net worth thanks to his being born into the famous Mars family, who are the owners of the candy company responsible for some of the most well-selling candies and snack foods in America, including 3 Musketeers, Snickers, M&Ms, Skittles, Combos, and many more.

Despite his famous name, John Mars has generally seen fit to remain outside the spotlight, living a private and (some would say) reclusive life in his home in Jackson, Wyoming.

In 2016 his net worth went up to 29 billion and is listed the 19th richest person in the world.

Here are some of the best highlights of John Mars’ career:

Favorite Quotes from the Mars Family

“The poor don’t live in functional market economies as the rest of us do, but in political economies where corruption and broken systems extend from local government to moneylenders.” – Jacqueline Mars

“Despite the hundreds of non-governmental organizations and the continued outpouring of foreign aid, East Africa remains as a region overwhelmed by extreme poverty.” – Jacqueline Mars

Now that you know all about John Mars’ net worth, and how he achieved success; let’s take a look at some of the lessons we can learn from him:

People will pay attention to what you say, just because of your position.

The leader’s job is to pay attention to what other people say, especially those who think their views don’t count. Show you’re listening by acting on what people tell you, and gain their trust by giving them the credit.

2. Don’t Step In With Solutions Too Quickly

No-one learns anything new if you keep doing what you already know how to do, and don’t allow others to try. Anyway, they may find a different or better way, and if not… mistakes are valuable too.

Be authentic, passionate, even emotional, about what you believe in. Share your vision and live your values. The personal is more engaging, even inspiring, than the process.

How much is John Mars worth?

John Mars’ net worth is estimated to be $42 Billion.

How old is John Mars?

How tall is John Mars?

John Mars is one of the richest businessmen in the world. Mars’ personal life is as ostensibly smooth and steady as his work in the business world. While he might not be a very visible billionaire, John Mars has guided Mars Incorporated into one of the most respected candy brands in the world.

What do you think about John Mars’ net worth? Leave a comment below.