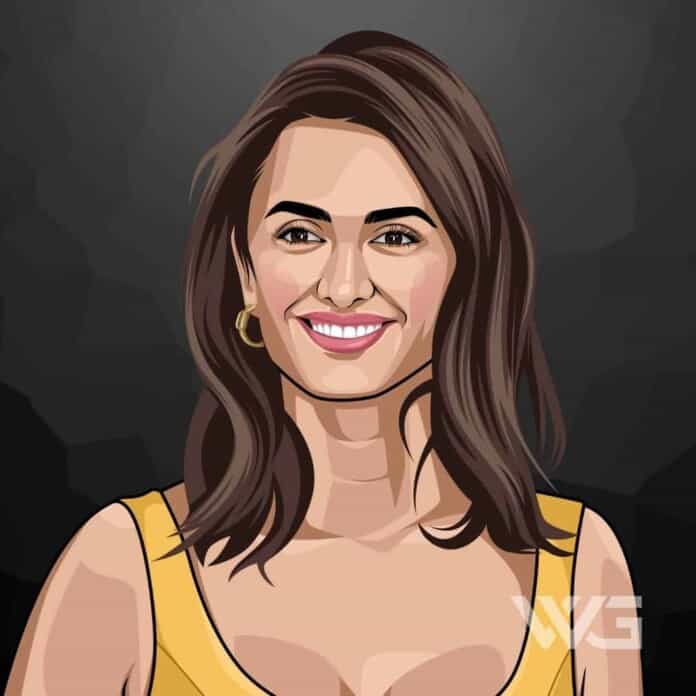 What is Penelope Cruz’s net worth?

Penélope Cruz is a Spanish actress and model from Alcobendas, Spain. Cruz was signed by an agent at the age of 15, she made her acting debut at 16 on television, and her feature film debut the following year in ‘Jamón Jamón’.

As of February 2023, Penélope Cruz’s net worth is roughly $85 Million.

Penelope Cruz Sanchez was born on the 28th of April, 1974, Alcobendas, Spain.

Raised as a Roman Catholic, young Cruz, she spent much of her childhood at her grandmother’s apartment. Often she indulged in playing acting games and re-enacting the commercials that left her friends and parents amused.

As a child, she was interested in dancing and also attained training in the same. For nine years, she took lessons in classical ballet at Spain’s National Conservatory.

In 1989, she auditioned at a talent agency. With more than 300 girls eyeing for the role, she came out victorious, impressing the judges with her oozing fresh talent, an unmatched sense of presence and remarkable acting skills.

Her first stint in front of the camera was for the Spanish pop group, ‘Mecano’ music video, ‘La Fuerza del Destino’. Following this, she was regularly featured on television throughout the 1990s decade.

She made her big-screen debut with the feature film, ‘Jamon, Jamon’ in 1992. She played the role of the female protagonist, Silvia. The film met with a favourable response.

The string of successful films made her resume quite extraordinarily extravagant but the high point still remained elusive. The Year 2001 filled up for the same with the release of Cameron Crowe‘s ‘Vanilla Sky’, an interpretation of the Spanish film ‘Open Your Eyes’.

In 2007, she starred in Woody Allen‘s ‘Vicky Cristina Barcelona’. She played the character of Maria Elena, a mentally unstable woman, with absolute perfection, thus garnering positive reviews from critics and audiences.

Here are some of the best highlights of Penelope Cruz’s career:

“For ‘Vicky Cristina Barcelona,’ for example, Woody Allen is one of the greatest American directors, and we really had a very good working relationship. We understand each other really well. He gave me one of the best opportunities somebody has ever given me in my career.” – Penelope Cruz

“Especially when you are advertising a product, I talk to the photographer and we create a character – it always gives you more freedom because it makes it less about yourself.” – Penelope Cruz

“The discipline that ballet requires is obsessive. And only the ones who dedicate their whole lives are able to make it. Your toenails fall off and you peel them away and then you’re asked to dance again and keep smiling. I wanted to become a professional ballet dancer.” – Penelope Cruz

“I am amazed about how everyone wants to know about my love life. They whisper to me, ‘Tell me the truth? Is it true?’ Who cares? Because we have this job, we are to say to everybody what we do, or with whom we sleep? It’s a bit absurd, but that’s why everybody lies so much.” – Penelope Cruz

Now that you know all about Penelope Cruz’s net worth, and how she achieved success; let’s take a look at some of the best lessons we can learn from her:

1. Always Be Kind, Everyone Is Going Through Something

The most beautiful people we have known are those who have known defeat, known suffering, known struggle, known loss, and have found their way out of the depths.

These persons have an appreciation, a sensitivity, and an understanding of life that fills them with compassion, gentleness, and deep loving concern. Beautiful people do not just happen.

Take deep breaths, stretch, and take breaks now and then. Enjoy life. Go outside, and appreciate nature. Keep yourself sane.

Live your life each day as you would climb a mountain. An occasional glance towards the summit keeps the goal in mind, but many beautiful scenes are to be observed from each new vantage point.

How much is Penelope Cruz worth?

Penelope Cruz’s net worth is estimated to be $85 Million.

How old is Penelope Cruz?

How tall is Penelope Cruz?

Penelope Cruz cruised her way to the big screen with her exceptional talent, captivating appeal and skilled approach.

Right from a young age, she indulged in re-enacting actors which built the foundation to take up acting as a career option. Her artistic talent was recognized as she earned nominations for Best Newcomer and Best Actress in her debut year in Goya Award, Spain’s equivalent of Oscars.

As of February 2023, Penelope Cruz’s net worth is roughly $85 Million.

What do you think about Penelope Cruz’s net worth? Leave a comment below.