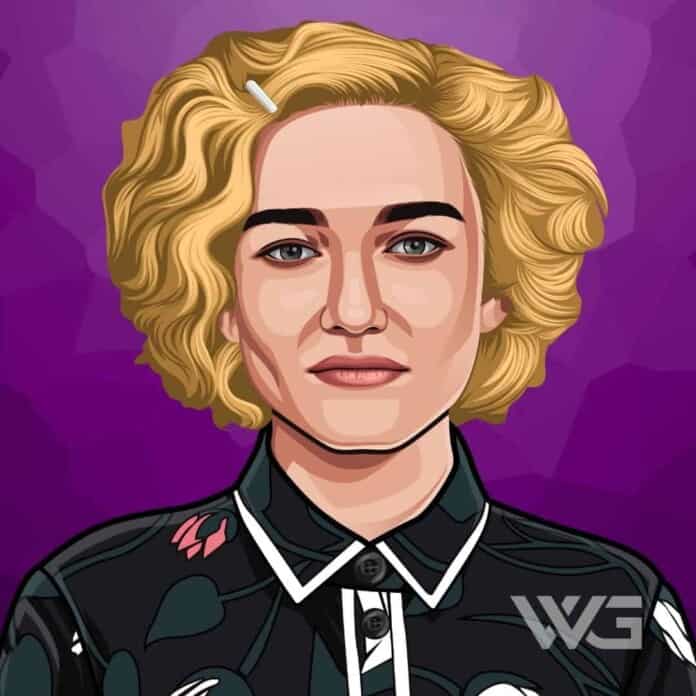 What is Julia Garner’s net worth?

Julia Garner is an American actress.

Garner is best known for her role as Ruth Langmore in the Netflix series ‘Ozark’ for which she has won two Primetime Emmy Awards. She also had roles in the FX drama series ‘The Americans, ‘Maniac,’ and ‘Dirty John.’

She has appeared in many films such as ‘Martha Marcy May Marlene,’ ‘The Perks of Being a Wallflower,’ and ‘Sin City: A Dame to Kill For.’

Julia Garner was born on the 1st of February, 1994, in New York. Her mother is a therapist who had a successful career as a comedian. Her father is a painter and an art teacher. Garner is Jewish, just like her mother. She grew up in the Riverdale neighborhood of The Bronx.

Garner started to take acting lessons when she was 15 years old to overcome her shyness. She had her theatrical debut when she was 17 years old in ‘Martha Marcy May Marlene’ playing Sarah’s role.

In 2012, Garner starred in ‘Electric Children.’ The following year, she starred alongside Ashley Bell in the horror movie ‘The Last Exorcism Part II.’ She went on the star in the American remake of the Mexican horror film ‘We Are What We Are.’

She co-starred in ‘Sin City: A Dame to Kill For’ in 2014. Garner was cast in a recurring role in the third season of the thriller series ‘The Americans.’

Since 2017, Garner has portrayed Ruth Langmore in the Netflix series ‘Ozark’ alongside Jason Bateman and Laura Linney. Her amazing performance led to her receiving two ‘Primetime Emmy Awards for Outstanding Supporting Actress in a Drama Series.’

The following year, Garner appeared in the Netflix series ‘Maniac.’ She makes appearances in the bravo true-crime series ‘Dirty John.’ In 2019, she was cast in the lead role in ‘Inventing Anna.’

Here are some of the best highlights of Julia Garner’s career:

“I started taking acting classes when I was 14. That’s when I knew I wanted to try it professionally. Before that, I always watched movies, but I didn’t think it was a real job. I watched Turner Classic Movies with my parents. I’ve always loved the old classics.” – Julia Garner

“I think that the most important thing for me is, how is the character that I would be reading for? Is it interesting? Is there stuff to do? Are there things that you can do with the character? How can you play it out? Just those kinds of things that are very important for an actor. Also, a good director and good dialogue.” – Julia Garner

“The thing that I look for in a script – I’m not looking for anything next because you never know where life’s going to take you, so you can’t just expect, ‘I want to do this next.’ So I’m not expecting anything; I’m just hoping.” – Julia Garner

“I always wear what looks good on me, because I think the most important thing with fashion is confidence. “You can wear something beautiful, and if you don’t feel good in it, it’s not going to look great.” – Julia Garner

“I started acting because I had such confidence issues because I wasn’t literate and couldn’t articulate myself in the way I wanted to. Almost everything that I said, I felt it was just dumb in a way. My mom was a little worried because of my problem, but I was like, ‘No, I really want to do it.’” – Julia Garner

Now that you know all about Julia Garner’s net worth and how she achieved success; let’s take a look at some of the lessons we can learn from her:

People are intrigued but also scared about uneasy things.

You have to add some dimension to each of your characters because everyone has their own layers.

In life, we all want to pursue different dreams. Find your passion and follow your dream.

How much is Julia Garner worth?

Julia Garner’s net worth is estimated to be $3 Million.

How old is Julia Garner?

How tall is Julia Garner?

Julia Garner is an incredible actress who made her debut in ‘The Dreamer and One Thousand Cranes.’

She appeared on the television series ‘Ozark.’ Garner had recurring roles on the series ‘Waco,’ ‘The Americans,’ ‘Maniac’ and ‘Dirty John.’ She has appeared in some films including ‘The Perks of Being a Wallflower,’ ‘The Assistant’ and much more.

In 2019 and 2020, she won ‘Primetime Emmy Awards for Outstanding Supporting Actress in a Drama Series’ for ‘Ozark.’

What do you think about Julia Garner’s net worth? Leave a comment below.