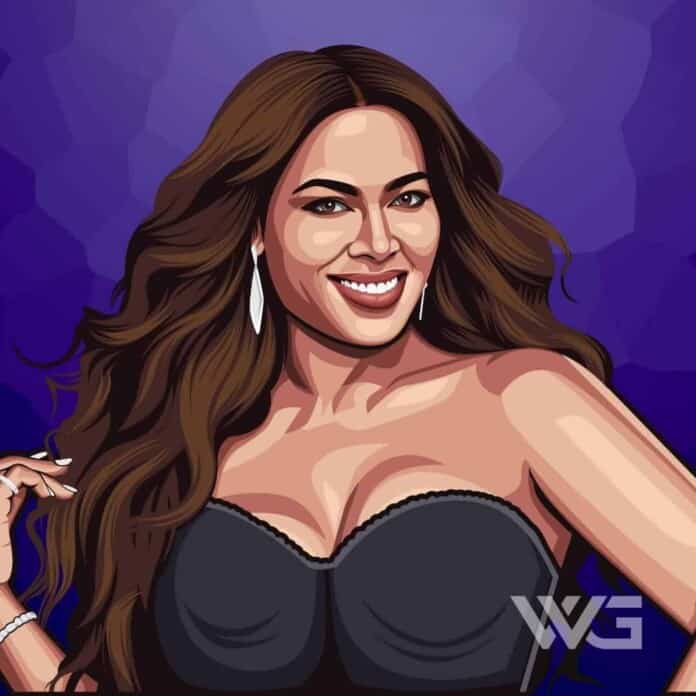 What is Kenya Moore’s net worth?

Kenya Moore is an American actress, model, author, and entrepreneur.

She is best known for starring in the series ‘The Real Housewives of Atlanta.’ Moore rises to fame in 1993 after winning the Miss USA contest, which led her to compete in that’s year Miss Universe pageant landing her among the top six.

Kenya Moore was born on the 24th of January, 1971, in Detroit. Her grandmother and aunt raised Moore. She has revealed that her mother never named her, and since birth, her mother decided to pretend she never had her.

Moore graduated from Cass Technical High School in 1989. After her graduation, she studied at Wayne State University and majored in psychology and minor in communication.

Moore began her career as a model when she was 14 years old.

She ended up being the cover girl of Johnsson Publishing Company’s magazine ‘Ebony Man’ in 1992. She was also the model of the company’s Ebony Fashion Fair cosmetic line. In 1993, she won the Miss Michigan USA, which helped her represent her state in the Miss USA pageant.

She played a minor role of Dane in the sitcom ‘The Fresh Prince of Bel-Air’ in 1994, and she landed the starring role of jasmine Davis in ‘Trois’ in 2010.

The movie grossed over $1.3 million at the box office and emerged among the highest-grossing African-American films of the year.  Over time, she appeared in many other films, including ‘Deliver Us From Eva,’ ‘Cloud 9’, and ‘I Know Who Killed Me.’

In 2012, she became part of the American reality series ‘The Real Housewives of Atlanta.’ She has starred in shows and series such as ‘Men, Women & Dogs,’ ‘Girlfriends,’ and ‘The Millionaire Matchmaker.’

Moore has also been on covers for magazines including ‘Essence,’ ‘Glamour,’ ‘Ebony’ and ‘Seventeen.’ She has also launched her own hair care line ‘Kenya Moore Hair Care,’ and she serves as its CEO. The products on offer include shampoo and hair conditioner.

How does Kenya Moore spend her money?

Kenya Moore began modeling at a young age, and since then, she has gained a fortune. Moore likes shopping and decorating her real estate with lavish stuff. She always makes sure that she lives a luxurious lifestyle.

Kenya Moore owns a lot of clothes and jewelry in her walking closet. In her closet, we can see many shoes from the best brands, and she also has a lot of high heels.

Kenya Moore is a proud owner of an incredible home in Atlanta. She reportedly paid around $500,000 for her home. The mansion comes with double showers, a spa bathroom, and a Kohler toilet.

Here are some of the best highlights of Kenya Moore’s career:

“People get exhausted, trying to figure me out. And I just let them.” – Kenya Moore

I love fashion. But I love it in a different way than most people. I’m not obsessed with it. I’m just obsessed with looking good and wearing clothes that make me feel good.” – Kenya Moore

“I think the beauty industry is a stepping stone in terms of pageants that will give you a launching pad to be seen. For people to understand who you are and what you stand for… I think it teaches self-esteem and self-worth. And it also encourages you to have a more philanthropic viewpoint of the world.” – Kenya Moore

“I honestly do not know if Nene is coming back. I think that her rep said that she does not have a contract as of now. You know, that could change, but normally if they want you back, they’ll give you a contract right away. So you can speculate on what that means or not. Things could change, but right now, there’s not a contract.” – Kenya Moore

“The Marc that you guys saw on TV, I believe, was like, you know, an angry Marc, he didn’t want to be there. I think that he had some resentment. It’s a little heartbreaking to see that we are in this situation and we just had our third-anniversary last week, and we weren’t able to spend it together.” – Kenya Moore

“Somehow, we ended up going to his house, and there were some very explicit things on TV. I was lost. He left me alone wandering around his house, and then when I followed the noises, he was watching something on TV that he probably shouldn’t have been.” – Kenya Moore

Now that you know all about Kenya Moore’s net worth and how she achieved success; let’s take a look at some of the life lessons we can learn from her:

Never give up on your dream; it’s more close than you think.

Moore was 14 years old when she became a successful model, always chase your dream.

3. Do Whatever You Want

How much is Kenya Moore worth?

Kenya Moore’s net worth is estimated to be $800 Thousand.

How old is Kenya Moore?

How tall is Kenya Moore?

Kenya Moore has made a huge mark in the entertainment industry as a director, model, actress, and television personality.

Moore forayed into showbiz when she was 14 years old, and she won the Miss Michigan USA event in 1993. She has starred in many big-screen films. Moore has been featured in many television productions such as ‘The Celebrity Apprentice 7’ and ‘The Parent Hood.’

She got her big break when she starred in the American reality television series ‘The Real Housewives of Atlanta.’

As of January 2023, Kenya Moore’s net worth is estimated to be roughly $800 Thousand.

What do you think about Kenya Moore’s net worth? Leave a comment below.