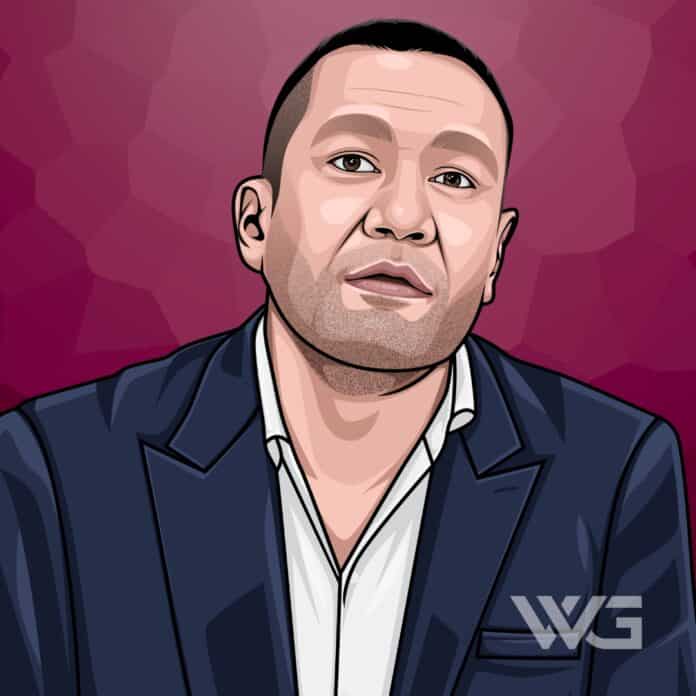 What is Kubrat Pulev’s net worth?

Kubrat Pulev is a Bulgarian professional boxer who held the European Heavyweight Championship from 2012 to 2016. Over the course of his professional career, the 41-year-old, nicknamed “the Cobra”, has faced off against opponents in the ring 32 times.

He’s won almost all his fights, losing only 3 times, with the wins including at least half with knockout victories that attest to his brute strength in the ring.

As of February 2023, Kubrat Pulev’s net worth is estimated to be $8 Million.

He grew up with his father, Venko Pulev, a former Boxing Champion in Bulgaria, and his siblings.

Pulev started his amateur career in Bulgaria, where he was born. As soon as he won the heavyweight Strandzha Cup in February 2002, though, he attracted worldwide attention.

In the semifinal of the Chemiepokal Cup, Pulev attempted to duplicate his triumph over Odlanier Sols, whom he had defeated to win the Strandzha Cup, but was unsuccessful.

He tried again at the World Championships in 2003 but lost to Odlanier Sols again after failing to qualify for the Euros because of a broken arm in 2002.

Pulev, who had already started to make a reputation for himself, won the qualifying fights before the 2004 Olympics but was unable to compete since all 16 of the available spots for heavyweight boxers were filled.

Kubrat participated in the super heavyweight division of the Strandja Cup in 2005 while maintaining his impressive form.

He competed in the 2005 World Amateur Boxing Championship, where he earned bronze. Pulev went on to win bronze at the European Championships, after his Olympic failure.

After numerous attempts, he eventually prevailed in the 2007 Chemiepokal competition. After having a poor showing at the 2007 World Amateur Boxing Championships, Pulev went on to win the Strandja Cup, earn a spot in the Olympics for 2008, and take home the European Championship.

In September 2009, Pulev, who was 28 at the time, began his professional career, competing four times in his debut year and winning each contest.

It was announced in March 2012 that Pulev and Alexander Dimitrenko would square off for the vacant EBU European Heavyweight Championship.

Pulev defeated Alexander Dimitrenko despite weighing 12 pounds less than the other fighter. Alexander was sent to the ground with a blow delivered by Pulev in the eleventh round, giving Pulev the victory by professional knockout (KO).

He took an 11-month break from fighting after his defeat by the world champion Wladimir Klitschko in the 5th round.

His subsequent match took place in November against former heavyweight champion Samuel Peter. Samuel Peter was forced to retire from the fight after only three rounds due to a shoulder injury.

After fighting Kevin Johnson in April 2017, Pulev retained his WBA Intercontinental heavyweight championship. Pulev had to cancel his scheduled bout with Anthony Joshua after over 70,000 tickets were sold, much to the dismay of the crowd. This was due to a shoulder injury he sustained during training.

The IBF planned a match between Dillian Whyte and Pulev after Dominic Breazeale declined to fight him. Unfortunately, Whyte withdrew from the bout in June 2018 after the conditions were agreed upon.

American boxer Jarrell Miller faced up against Pulev as the next-ranked challenger. The two boxer parties’ discussions over a fight came to an end in July without a resolution.

Pulev is a well-known heavyweight boxer and is considered one of the greatest of his generation.

He performed well against journeymen boxers, but when coming face to face with top fighters like Klitschko and Anthony Joshua, he didn’t fair too well.

One of the important skills of good boxing management is to choose the right opponents for your fighter at the right time.

Pulev has done well by fighting boxers he can beat and steadily moved up the ranks until he was challenging for the major heavyweight and super heavyweight titles.

He faced George Arias in October 2015 and, after an uninspiring fight, won on points after the fight went the distance.

His previous opponent was Maurice Harris, whom Pulev defeated in under a minute by KO.

Here’s a breakdown of Kubrat Pulev’s annual net worth:

Pulev was judged the winner and subsequently claimed the title of European heavyweight Champion after receiving the support of two of the three judges.

Since 2006, Kubrat had been in a long-term relationship with Andrea, a well-known Bulgarian singer whose real name is Teodora Rumenova Andreeva.

Unfortunately, once the fighter received his boxing license in the United States of America in July 2019, they parted ways. Pulev hasn’t spoken publicly about his personal life much since that time.

After Kubrat defeated Bogdan Dinu in a fight, the kiss gate scandal happened in Costa Mesa. In an interview after the victory, he gave reporter Jennifer Ravalo a hard kiss on the lips.

Following that incident, the California State Athletic Commission suspended his license. It turned out that the story was far from over, since a short while later Tervel, the boxer’s younger brother, tweeted a video of reporter Jennifer Ravalo dancing suggestively with one of his brother’s entourage.

Unbeknownst to the reporter, the video was aired and the reporter declared on March 28, 2019, that she would sue the boxer.

It is interesting to note that Pulev’s previous girlfriend, Andrea, supported him publicly, saying the accusations against him were preposterous.

On July 24, 2019, the professional boxer’s boxing license was renewed following the completion of his sexual harassment prevention training. He was informed that if he ever acted so inappropriately again, his license would be revoked.

Kubrat has managed to earn a huge reputation over the course of his professional boxing career, despite not being up to the task of defending his reputation.

He was, unfortunately, unable to perform well against acknowledged top-flight fighters and was made to look very ordinary when faced by Klitschko.

Here are a few of the most significant events in Kubrat Pulev’s career:

But, not to take away from his record in the ring, Kuibrat has managed to earn a respectable reputation and a large purse from his professional career as a pugilist.

When faced with top-level, elite boxers, Pulev uses a distinctive style that is hard to break down and even Klitschko struggled a bit to land punches initially.

How Does Kubrat Pulev Spend His Money?

There is very little information available on how Kubrat spends his money and with no wife or girlfriend in the picture, he’s free to do as he wishes with his earnings.

An indication of the type of person he is though, came at a press conference when he offered half of his fight purse to medical staff fighting the COVID pandemic.

With most fighters spending their money on some of the most expensive cars in the world, Pulev doesn’t strike one as a person who needs to flash his money around.

Kubrat Pulev has made a name for himself as a difficult opponent who can make even experienced fighters look flatfooted and uncoordinated.

He shows his true fighting spirit when he’s under pressure and, after being knocked down, shows a lot of heart to rise from the canvas and continue fighting.

Here are some of the finest moments from Kubrat Pulev’s career:

While he may not be one of the richest boxers in the world, he’s a formidable opponent and has the respect of boxing fans and his opponents.

With Kubrat’s most recent fights, he’s managed to secure more top flight opponents, who have increased his earnings substantially, especially from the increased online audience.

Kubrat Pulev is a man of few words, but when he does talk, his opponents had better be listening.

But under the bluff exterior lies a soft heart, and he is known for his giving nature and respect for those around him.

Here are our favorite quotes from Kubrat Pulev:

Pulev fought an intelligent battle throughout his career, carefully choosing his opponents and using his slightly unorthodox style to fluster his opponents.

He starts slowly and keeps exerting pressure as his fights progress, making it difficult for his opponents to get to grips with him.

Now that you know all about Kubrat Pulev’s net worth, here are some of the best success lessons to learn from Kubrat Pulev:

Kubrat Pulev is a patient fighter, waiting for the right openings and never rushing his fights.

He absorbs pressure well and stays on his feet, waiting for his opponent to make a mistake.

Pulev knows that he must choose fights that will allow him to use his strongest assets without in turn being taken in by his opponent’s skills.

To this end, he has managed to avoid fighting boxers who can rough him up or who have huge reach advantages.

3. Help Those Who Help You

As a boxer, Kubrat knows only too well how important the medical team is to him.

It is for this reason that he offered to split his winnings with them to assist them with equipment in the fight against the pandemic.

Kubrat won the majority of his fights throughout his amateur and professional career from 2002 to 2020.

In the process, he acquired light-heavyweight, heavyweight, and super-heavyweight titles, making a name and a reputation for himself in the boxing world.

As of February 2023, Kubrat Pulev’s net worth is estimated to be $8 Million.

What do you think about Kubrat Pulev’s net worth? Leave a comment below.

What is Britney Spears' net worth? Introduction As of ,...