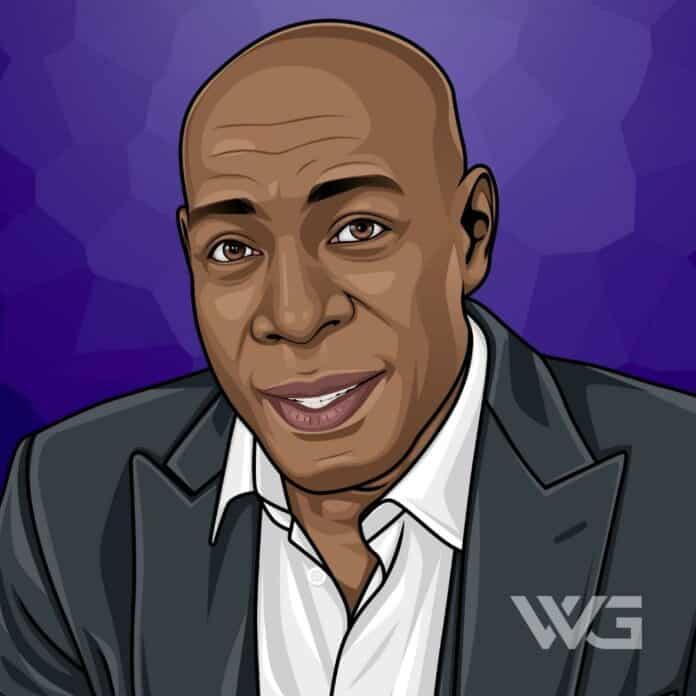 What is Frank Bruno’s net worth?

Frank Bruno is an English retired professional boxer and media personality known for his iconic fights with Mike Tyson and Lennox Lewis.

Outside the ring, he’s become a popular entertainer in the UK through his pantomime performance and other media appearances.

Franklin Roy Bruno was born 16 November, 1961, in Hammersmith, England, and was raised with his five siblings in a terrace house in Wandsworth, South London.

His parents settled in the United Kingdom after moving from the Caribbean, and as a child, Bruno was raised in an atmosphere of petty crime and violence.

To avoid being drawn into a criminal lifestyle, he joined a gym at the age of 14 and began his journey toward professional boxing.

In 1981, Frank Bruno began his professional boxing career, winning his first 21 wins by knockout and coming to the attention of boxing magazines The Ring and KO Magazine.

A rising star, Bruno defeated Anders Eklund in 1984 to become the European heavyweight champion, following it with a one-round win over former WBA champion Gerrie Coetzee.

In 1989, Bruno took on his biggest fight yet, challenging Mike Tyson for the undisputed world heavyweight title, losing the fight to Tyson’s superior style.

He fought Lennox Lewis in 1993, again missing his chance to take the title, finally becoming WBC heavyweight champion in 1995 after defeating Oliver McCall.

Following his retirement from boxing, Bruno made many media appearances in the UK, becoming a cultural icon.

He worked as a boxing commentator and appeared on many TV shows, including Piers Morgan, Michael Aspel, and The Alan Titchmarsh Show.

At the peak of his career, Frank Bruno took on some of the richest boxers in the world and became a household name for boxing fans.

This allowed his career earnings to climb to millions of dollars per fight, with his fight against Mike Tyson netting him $7 million.

While his current salary doesn’t match his former glory, his media appearances and endorsements mean he still enjoys a steady income.

Frank Bruno’s net worth enjoyed its biggest increases at the height of his boxing career, augmented with many sponsorships for some of the leading sports brands.

Over the years, he has invested his earnings in real estate, stocks, and other business investments, building up assets to add to his net worth.

His prominent role as a celebrity and ambassador for major charities means his net worth will likely continue to increase in the future.

Frank Bruno began a relationship with his friend Yvonne Clydesdale in 2005, with their first baby Freya born in 2006.

He’s a keen supporter of one of the richest soccer teams in the world, West Ham United F.C., and competed in the London Marathon in 2011.

With a strong social media presence, his official Instagram account promotes many sporting events as well as his mental health support charity.

With his impressive winning streak and multiple world title challenges, Frank Bruno has been consistently ranked as one of the most iconic boxers in the world.

This is reflected in his many awards and nominations, both as a boxer and through his media and charity work.

Here are some of the notable awards from Frank Bruno’s career:

With his ongoing charity work and media appearances, it’s likely Frank Bruno will receive more honors and awards over time.

How Does Frank Bruno Spend His Money?

While Bruno’s net worth falls short of some of the richest athletes in the world, he’s been able to afford a luxurious lifestyle with expensive homes and cars.

He’s known to have driven a Bentley Arnage, which is among the most expensive cars in the world, which he put up for sale in 2016.

His multi-million dollar home in Bedfordshire was put up for sale the following year after a dispute with local travelers over water use.

He’s helped place British boxers back on the map and worked hard to bring attention to a broad range of important charitable organizations.

Here are some of the best highlights of Frank Bruno’s career:

With Bruno’s media appearances keeping him in the public eye, more high points and successes are likely to come.

Frank Bruno’s media-savvy career has seen him interviewed many times, sharing his thoughts on the nature of boxing and success.

He’s also been outspoken about mental health, particularly following on from his own breakdown and experiences.

Here are our favorite quotes from Frank Bruno:

Now that you know all about Frank Bruno’s net worth, we’ll take a closer look at how we can draw inspiration from his experiences.

His struggles growing up in poverty, as well as his mental health challenges, can help us to overcome our own financial and mental health problems.

Here are some of the best success lessons to learn from Frank Bruno:

1. Don’t Let Poverty Put You Off Your Ambitions

Frank Bruno’s experiences growing up in poverty and surrounded by crime didn’t deter him from following his dreams.

He channeled his aggression into boxing and quickly became one of the most successful fighters of his time.

2. Share Your Journey To Recovery To Help Others Find Their Way

Bruno’s mental health breakdown was about as public as they come and was featured heavily in the news at the time.

He used this media spotlight to highlight the great work by mental health professionals and share his road to recovery with others who deal with depression.

3. Don’t Take Yourself Too Seriously

Bruno’s fighting prowess could easily make him an intimidating figure, but he wasn’t afraid to laugh at himself and introduce some levity through his involvement in pantomime.

So there you have it, our complete guide to the life and boxing career of Frank Bruno, covering how he earns and spends his impressive net worth.

While Bruno is retired from boxing, he remains active in media and has worked with many charities and other organizations up to the present day.

Since his net worth is likely to change, we’ll update this article to bring you the latest facts and figures, so be sure to check back again.

What do you think about Frank Bruno’s net worth? Leave a comment below.