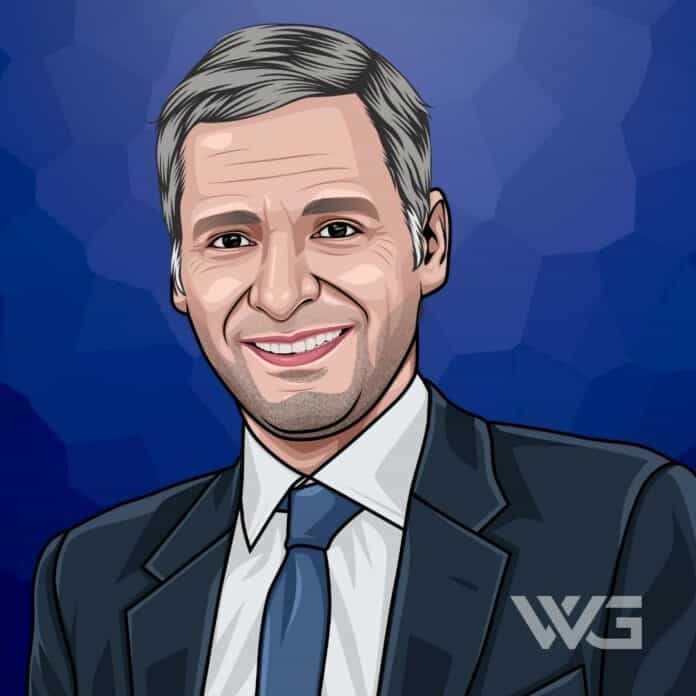 What is Rodolphe Saadé’s net worth?

Rodolphe Saadé is a Lebanese-French shipping magnate and businessman best known as the owner of the CMA CGM Group.

After inheriting the company from his father in 2018, he has helped increase its fortunes while demonstrating his commitment to combating climate change.

Rodolphe Saadé was born 3 March 1970 in Lebanon to his Lebanese mother, Naila Saadé, and father, Jacques Saadé, founder and chairman of the CMA CGM Group.

During the 1970s, Rodolphe moved with his family to Marseilles, with the family entering into disputes leading to his father Jacques taking control of the company.

Over the following decades, the company increased in size significantly, establishing a headquarters in Marseilles.

Rodolphe Saadé’s career with the CMA CGM Group began in earnest in 1994, working from New York and Hong Kong while serving as a director.

In 2009, he supported the decision to break up the group and focus on shipping, becoming Vice Chairman and member of the Board of Directors of the CMA CGM Group in 2010.

Following his father’s death in 2018, he took on more roles and responsibilities in the company, acquiring Ceva Logistics to create a global transport and logistics group.

In 2019, he committed to environmentally friendly shipping and established rules to help protect the biodiversity of the Arctic zone, with his net worth increasing significantly during this time.

He has also appeared alongside Elon Musk and Jeff Bezos on the Forbes list of billionaires in 2022, joining fellow French billionaire Bernard Arnault, chief executive officer of the Louis Vuitton conglomerate.

By 2021, the company was running nearly 600 ships and was ranked as one of the world’s largest shipping companies, with annual revenue of around $66 billion.

While Rodolphe Saadé’s precise career earnings are unknown, we can gather estimates and use these to gain insights into his income.

Some reports indicate that he takes home a weekly salary of around $2.5 million, giving him an annual income of approximately $30 million.

With his company generating billions in revenue each year, it’s safe to assume that Rodolphe Saadé is taking home several million annually.

As one of the richest people in the world, Rodolphe Saadé’s net worth has seen significant increases over a relatively short period of time.

Rodolphe Saadé is not known for speaking publicly about his personal life, preferring to keep this information to himself.

He is known to reside in Marseilles, France, where his shipping company has its headquarters, although the details of his real estate are unclear.

Business announcements and other updates are made through the official Rodolphe Saadé Twitter account, which has over 8,500 followers.

Rodolphe Saadé enjoyed a successful career in the shipping industry before and after his father’s death.

In 2017, Rodolphe Saadé was awarded the Knight of the French Legion of Honor, the highest French order of merit a civilian can receive.

As CEO of the CMA CGM Group, he was awarded the Global Personality Award at the SeaTrade Maritime Awards International 2020.

How Does Rodolphe Saadé Spend His Money?

With his exceptional wealth and estimated annual income, Rodolphe Saadé can afford any luxury goods he chooses.

With his close ties to shipping, he will have access to some of the most expensive yachts in the world in the port cities of Marseille, New York, and Hong Kong.

Over the course of his impressive career, Rodolphe Saadé has achieved success in multiple domains and performed a wide range of duties for his company.

Here are some of the best highlights of Rodolphe Saadé’s career:

Rodolphe Saadé’s business acumen and success in shipping will no doubt see him enjoy continuing success in the future, with many more highlights to come.

While Rodolphe Saadé isn’t typically open about his personal life and philosophy, he has provided some insights into the nature of international trade in some of his interviews.

Here are our favorite quotes from Rodolphe Saadé:

Now that you know all about Rodolphe Saadé’s net worth, it’s time to examine some of the life lessons we can learn from his incredible success as a businessman and shipping magnate.

Here are some of the best success lessons to learn from Rodolphe Saadé:

1. Following In Your Father’s Footsteps Can Be A Great Thing

While many people often prefer to avoid following their family’s tradition, Rodolphe Saadé has embraced his responsibilities with his father’s business.

He continues to work to develop the business following the death of his father.

2. Commit Yourself To Making The World A Better Place

International shipping is known for causing much of the world’s pollution and environmental damage.

Rodolphe Saadé has committed his company to operating safely and minimize the damage to the world’s oceans.

While Rodolphe Saadé is the current driving force behind the family business, he still works closely with his siblings and takes on board their input when making decisions about the future of the business.

So there you have it, our complete guide to Rodolphe Saadé’s net worth, covering everything from his early years working for his father to his complete control of the family company.

With the CMA CGM Group proving itself as a global leader in shipping, his net worth is likely to continue to grow over the coming years.

Be sure to check back on this article in the future, as we’ll update it to include the latest available data.

What do you think about Rodolphe Saadé’s net worth? Leave a comment below.