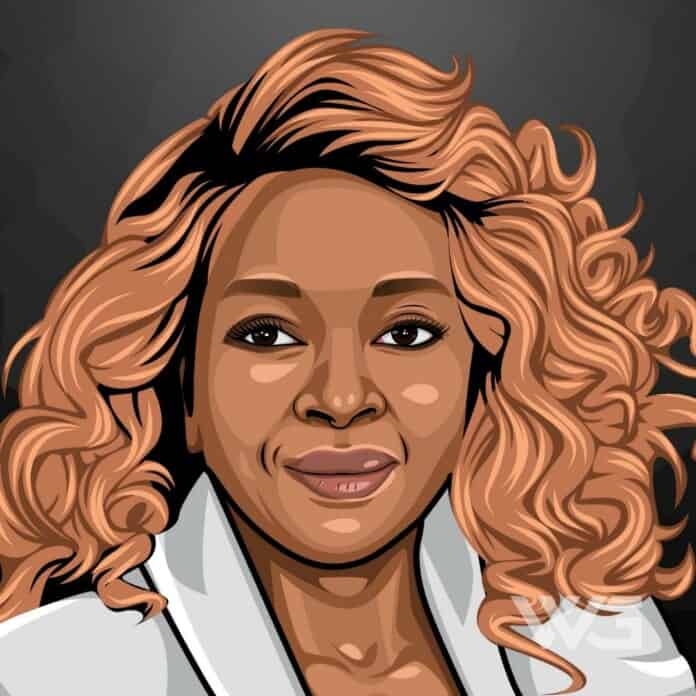 What is Mary J. Blige’s net worth?

Mary J. Blige is an American singer and actress.

Blige’s career started in 1991 when she signed to Uptown Records and released 12 studio albums. Today, she has sold over 50 million albums in the U.S and 80 million records worldwide.

Mary Jane Blige was born on the 11th of January, 1971, in New York. Blige is the daughter of Cora and Thomas Blige. She grew up with her elder sister, and her parents spent their time fighting on petty issues and divorced.

Her mother took the sisters to Georgia, and they later returned to New York. Blige would often practice singing, and her sister and mother supported her to pursue her dream of becoming a singer.

In 1992, Blige’s first album, ‘What’s the 411,’ was released. The critics and the public accepted the album, and it was a unique mix of soul and hip hop. It topped the Billboard 200 chart.

The tracks ‘Real Love’ and ‘You Remind Me’ became very popular. Her second album, ‘My Life’ was released in 1995. The second album expressed the pains she had gone through in her personal life growing up. The album also topped the music charts and sold millions of records around the globe.

The following year, ‘My Life’ received a Grammy nomination. She also managed to win the ‘Best Rap Performance.’ Her next album ‘Love and Life’ and ‘The Breakthrough’ was also a huge success and remained on the top charts for many weeks.

In 2008, she released her eighth album, ‘Growing Pains,’ which helped her complete her hat-trick, as the album graced the ‘Billboard 200’ and the ‘Hot R&B/Hip-Hop Songs’ charts. The following year, Blige dropped another album titled ‘My Life II…The Journey Continues (Act 1)’.

How Does Mary J. Blige Spend Her Money?

Mary J. Blige has proven many times that she is a supremely talented human being. It makes perfect sense that she has managed to gain a $20 Million fortune. She has bought many incredible things for her fortune.

Mary J. Blige has an impressive collection of lavish cars. In her collection, we can see cars such as a Rolls-Royce Phantom, a Range Rover, and a Mercedes-Benz SL550.

This singer owns many pieces of fine jewelry. Some of her most notable jewelry features a Bruni necklace, a diamond cross necklace, a Luminaire De Nuit diamond, and pearl earrings.

Here are some of the best highlights of Mary J. Blige’s career:

“Life is full of trials and tribulations. It’s dramatic when you don’t treat people right when you’re in the tribulations, but I know now how to get out of it. You have to decide to say ‘No more,’ and then you know what to do when the trials happen.” – Mary J. Blige

“I used to think I was ugly. I thought I looked like a camel. A person who doesn’t love themselves; will see anything that pops up on their face. I’ve seen squirrels, I’ve seen a bird, and I’ve seen all kinds of animals on my face. But that is the result of self-hate. I’ve learned to say: ‘You know what? I am a beautiful black woman’.” – Mary J. Blige

“So as long as I’m a human being and I’m not perfect, I’m able to say I have some growing pains. Because to sustain where you are once you made such a breakthrough that everyone is looking at you, now everyone is like, ‘Ooh, is she gonna make a mistake?’ Yes, I’m going to make a mistake. Yes, I’m still gonna do things.” – Mary J. Blige

“I had to learn how to trust my gut. Trust what I know to be right… not right, but not waver on who I am. Know who I am, know what I want, and know it. Not waver on it, and be secure in that. And I still struggle with it. But I really… I can’t be moved. You can’t move me, and that all comes with loving myself, and I’m like my best buddy.” – Mary J. Blige

“Music makes us want to live. You don’t know how many times people have told me that they’d been down and depressed and just wanted to die. But then a special song caught their ear, and that helped give them renewed strength. That’s the power music has.” – Mary J. Blige

Now that you know all about Mary J. Blige’s net worth and how she achieved success; let’s take a look at some of the best lessons we can learn from her:

Without your health, everything else means nothing.

If you’re here right now in your life, your journey continues, and you’ve lived to tell the story.

There are so many things that life is, and no matter how many breakthroughs, trials will exist, and we’re going to get through it. Just be strong.

How much is Mary J. Blige worth?

Mary J. Blige’s net worth is estimated to be $20 Million.

How old is Mary J. Blige?

How tall is Mary J. Blige?

Mary J. Blige is a well-established singer and actress who started her career as a background singer in the late 1980s. Her career took off after her debut album was released.

Eight of her 13 albums have all been honored as “multi-platinum” by the RIAA. Throughout her career, she has won nine Grammy Awards and 22 nominations.

Today she is known as the “Queen of hip-hop soul.” She made her movie debut in 2001 in ‘Prison Song.’

What do you think about Mary J. Blige’s net worth? Leave a comment below.