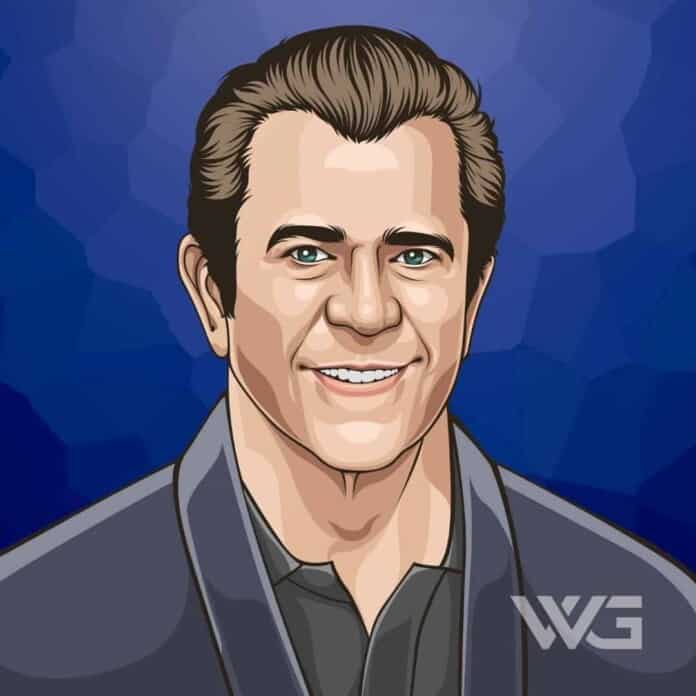 What is Mel Gibson’s net worth?

As of February 2023, Mel Gibson’s net worth is estimated to be roughly $425 Million, making him one of the wealthiest actors of all time.

Mel Colmcille Gerard Gibson is an American actor and filmmaker from Peekskill.

Gibson is best known for his action hero roles as Max Rockatansky in the ‘Mad Max’ action series, and as Martin Riggs in the ‘Lethal Weapon’ buddy cop film series.

Mel Colmcille Gerard Gibson was born in Peekskill, New York on the 3rd of January, 1956.

One of Gibson’s younger brothers, Donal, is also an actor. His first name is derived from Saint Mel, a fifth-century Irish saint, and founder of Gibson’s mother’s native diocese, Ardagh.

Gibson is also an Australian permanent resident. He was educated by members of the Congregation of Christian Brothers at St Leo’s Catholic College in New South Wales during his years in school.

Gibson started his film career in 1977 when he starred in his first movie ‘I Never Promised You A Rose Garden’. He did another low-budget film named ‘Summer City’ and a television show called ‘The Sullivans’. All these movies were released in 1977.

His breakthrough to the film world opened in 1979 after his portrayal of Max Rockatansky in the film ‘Mad Max’.

In 1981, Gibson returned with ‘Mad Max 2: The Road Warrior’, which made him an international star. After that, he starred in movies such as ‘The Year of Living Dangerously’, ‘The River’ and ‘The Bounty’.

In 1985, Gibson received his first million-dollar salary with the ‘Mad Max’ third sequel. He also became a famous movie icon when he starred in ‘Lethal Weapon’ which became a huge hit. A few years later he changed genres, with films such as ‘Hamlet’, Bird on a Wire’ and ‘Air America’.

At the beginning of the 90s, Gibson made his directorial debut in the movie ‘The Man Without a Face’. He surpassed everybody’s expectations and the movie went on to win two Oscars.

The year 2000 was financially good for him. Three of his films ‘The Patriot’, ‘Chicken Run’ and ‘What Women Want’ grossed over $100 million dollars.

Since then, his movies have sold millions worldwide and he has starred in movies such as ‘Edge of Darkness’, ‘Machete Kills’ and ‘The Expendables 3’.

Here are some of the best highlights of Mel Gibson’s career:

“Film is built for kinetic movement and crash and burn. It’s a great tool for spectacles. But if it’s not rooted to something a little higher, you’re just kicking your butt around the corner. You can only take so much of that. You have to have some sort of foundation to explode from.” – Mel Gibson

“Life is life, and one has experiences that are painful and some that are very pleasant, and one has reward and sacrifice and more reward and disappointment and joy and happiness, and it’s always going to be the same.” – Mel Gibson

“The very first idea I ever had about making a film… my first thought about ever being a filmmaker was when I was sixteen years old and I wanted to make a Viking movie. And I wanted to make it in old Norse, which I was studying at the time. It’s odd because at that age that’s a stupidly ridiculous idea ’cause how will I ever be a filmmaker.” – Mel Gibson

“Acting feels different. I’m not sure exactly what that is, but it used to mean a lot more. Maybe that sounds like I’m throwing it away and I’m not, I’ll still do the best damn job I can, but it doesn’t mean the same thing. I’m going to get the answer for myself one of these days. It’s the male menopause, that’s what it is.” – Mel Gibson

“I don’t think we’re crumbling as a civilization, but this is not our finest hour, and it’s good to be mindful that we’re all susceptible to fall and to look at what are the earmarks of a civilization on the wane. What are they – a destruction of the environment?” – Mel Gibson

View our larger collection of the best Mel Gibson quotes!

Now you know all about Mel Gibson’s net worth, and how he became successful; let’s take a look at some of the lessons we can learn from him:

Life is Life, and one has experiences that are painful and some that are very pleasant. One has reward and sacrifice and more reward and disappointment and happiness and joy. It’s always going to be the same.

Life’s experiences, whether they be pleasant or unpleasant, tortuous or excruciatingly wonderful and blissful. Life teaches you, and somehow you learn from it.

Change can always be preceded by a little pain. Some people can change and they don’t have to go through so many painful things. Sometimes a change in your life can be good and bad.

How much is Mel Gibson worth?

Mel Gibson’s net worth is estimated to be $425 Million.

How old is Mel Gibson?

How tall is Mel Gibson?

Mel Gibson has been a great actor for many decades and there’s no news that he is a very talented actor. Alongside many other stars, he has been in successful films such as ‘Mad Max’, ‘Braveheart’, ‘Signs’ and ‘Blood Father’.

As of February 2023, Mel Gibson’s net worth is approximately $425 Million, making him one of the richest actors in the world alongside Sylvester Stallone and Johnny Depp.

What do you think about Mel Gibson’s net worth? Leave a comment below.