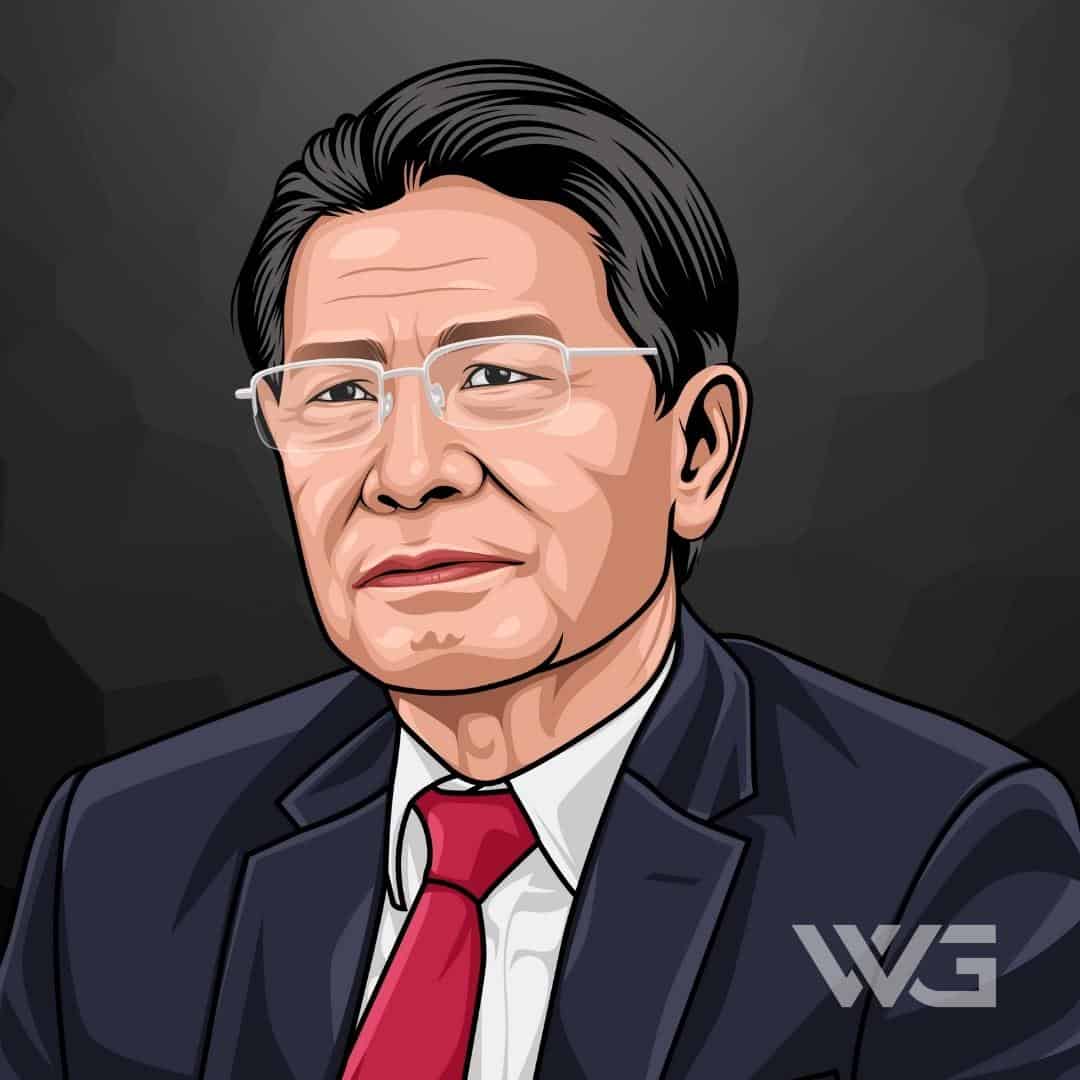 What is He Xiangjian’s net worth?

He Xiangjian’s wealth was built on the back of his entrepreneurial skills, resulting in the Midea Group becoming the largest appliance manufacturer in China.

Xiangjian is one of China’s richest men and thirty-five of his employees have a net worth of more than a billion dollars.

As of December 2022, He Xiangjian’s net worth is estimated to be $27 Billion.

There is not much known about He Xiangjian’s childhood as he has not revealed much about his family.

What we do know, is that his hunger for business started at a young age. While he was young, he started producing bottle lids and caps on a very low budget.

To increase the mystery factor, it is said that He Xiangjian never attended high school.

He Xiangjian grew up in poverty and it is said that his family did not even have enough money to buy bread. With this in mind, He Xiangjian feeds over two hundred thousand people free of charge every day.

Once he saved 5,000 Yuan, Xiangjian created his first proper business in the same way that Changpeng Zhao started a business to help his family. He Xiangjian went from producing bottle caps to help feed his family, to producing furnished goods and then electrical appliances.

He started building the company at the age of twenty-six with the help of villagers in the city of Beijiao.

Unfortunately, the business was started at the time of communism’s rise in China. This was a problem for the company’s growth, as the communist government at the time did not want to promote private companies.

He’s company could not progress much for the next thirty-two years. But, after China’s move to a capitalistic economic structure, the company could finally progress and grow.

Midea Group became one of the biggest appliance makers in the whole of China. With this success, he decided to venture internationally

In the 1990s, the Midea Group was turned into one of the biggest appliance businesses worldwide.

The Midea Group had become a billion-dollar company by 1992 and according to figures reported in 2012, there are about thirty-five employees within the company who have a net worth of over a billion dollars.

Trading of its shares was suspended a few years ago due to a “critical matter” at the Midea Group. The government announced that the reason was because of a problem occurring during the merger of an unlisted company with Shenzhen-listed, GD Midea.

Because of government interference, the company began to struggle. Sales dropped dramatically and He stepped down as head of the company in 2012, even though the company needed active leadership.

After He Xiangjian’s retirement, his son took over as the managing director of the Midea Group.

He Xiangjian continues to be involved in the company as a controlling stakeholder, providing direction from behind the scenes.

His family control about a third of the business while He Xiangjian is enjoying a comfortable retirement away from the day-to-day business operations.

Here is an estimated overview of He Xiangjian’s annual income:

Despite the Chinese government’s accusations, He is still very much involved in the company’s affairs and continues to enjoy a huge income on the back of the company’s massive profits.

He Xiangjian’s Net Worth Annually

Unsurprisingly, He Xiangjian managed to increase his personal wealth as his company grew. Despite the setbacks and obstacles the Chinese government put in his way, He’s business is still thriving.

Here’s a breakdown of He Xiangjian’s annual net worth:

Unless something untoward happens to He Xiangjian, his enormous wealth will continue to grow as the demand for consumer goods worldwide is enormous. China can supply these consumables at a cheaper price than anywhere else, so his company enjoys a massive competitive advantage.

Not much is known about He Xaingjian’s personal life. What we do know, is that he is married and has three children. His son, He Jianfeng, is currently the managing director of the Midea Group and Midea Group Real Estate Holding.

He currently resides in Foshan, which is the same town in which he was born. He lives in Junlan International Golf Life Village, which was developed by the Midea Real Estate Group.

He Xiangjian is a recognized art collector and is the founder of the He Art Museum. It is a non-profit museum that is privately funded and was designed by Tadao Ando.

In 2020, it was reported that there was an attempted kidnapping of He Xiangjian. It was said that the kidnappers broke into his villa but his son, He Jianfeng, escaped the villa and swam across a river to alert the police. Five suspects were arrested after the police rescued He Xiangjian.

He’s achievements are nothing short of spectacular given his poor background and the constraints of trying to grow a business under communism.

And when he reached the pinnacle of business success, he didn’t forget where he’d come from, making sure that he regularly contributed to charities and feeding schemes.

Here are some of the more memorable moments from He Xiangjian’s career:

With China irrevocably on the path to a capitalistic economy, He Xiangjian’s company and his shares in it will ensure his wealth endures. Unless, of course, the government decides that they want some of the action, and take it from him.

How Does He Xiangjian Spend His Money?

He Xiangjian is known to be the most charitable self-made billionaire in the whole of China. The only video available of He Xiangjian is of him on a stage announcing that he would be donating $875 million to charity.

With his early life experience of not being able to afford food, He Xiangjian feeds over two hundred thousand people daily, absolutely free of charge.

It is unlikely that he drives any of the most expensive cars in the world, but we’re sure that his garage is stocked with the best wheels that China has to offer.

He Xiangjian is a workaholic who will stop at nothing to make his business bigger and stronger each year.

Xiangjian continues to help direct the company he started, even though his son is now the managing director and is following in his footsteps.

Here are some of the best highlights of He Xiangjian’s career:

The young He Xiangjian could never have imagined that one day his tiny company which employed a handful of villagers, would one day employ thousands of staff across the country.

After setting up his huge corporation, the next generation of Xiangjian’s family are now taking the business to the next level.

Unfortunately, He Xiangjian rarely grants interviews or speaks publicly. He doesn’t speak Mandarin very well either, even though it is the national language.

Here is our favorite (and only) quote from He Xiangjian:

3 Amazing Lessons From He Xiangjian

What we know of He, is that he is a strong leader with a visionary approach to doing business.

Now that you know all about He Xiangjian’s net worth, here are some of the best success lessons to learn from He Xiangjian:

1. You Too Can Succeed

No matter the lifestyle you are living, you too can succeed believes He. With a poor family and starting with nothing to his name, He created a billion-dollar business.

Knowing what it was like in his early years, He Xiangjian donates and feeds hundreds of thousands of people every day to ensure that they do not go through what he went through as a child.

3. Never Give Up Fighting

Even with the company going through intense government scrutiny, He Xiangjian never gave up and the company is still a worldwide success to this day through his efforts.

He Xiangjian is one of the most famous entrepreneurs in the world. At the Midea Historical Museum, you can see how the company started from a small plant and grew into a world-class, leading brand in the household appliance industry.

There are currently multiple corruption cases against He Xiangjian started by the Chinese government. The reason behind his not being caught out for anything is that it is difficult to trace his current assets.

As of December 2022, He Xiangjian’s net worth is estimated to be $27 Billion.

What do you think about He Xiangjian’s net worth? Leave a comment below.