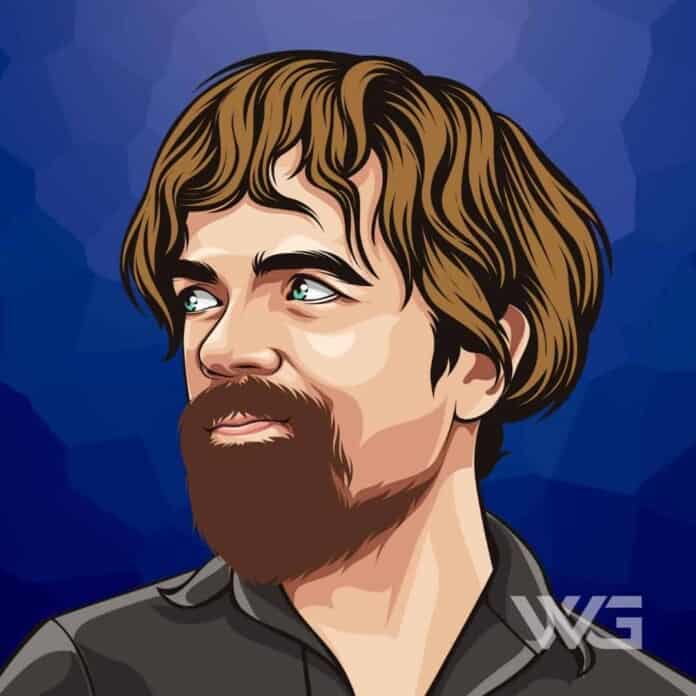 What is Peter Dinklage’s net worth?

As of December 2022, Peter Dinklage’s net worth is estimated to be $25 Million.

Peter Dinklage is an American actor and producer from Morristown, New Jersey. Dinklage is best known from the films ‘The Station Agent’, ‘Elf’, ‘Find Me Guilty’ and ‘Pixels’.

Peter Dinklage was born on the 11th of June, 1969, in Morristown, New Jersey. Dinklage is the son of John Carl and Diane Dinklage.

Even though he was born to average sized parents, Peter began noticing that he was suffering from Achondroplasia, which is one of the more common forms of dwarfism which exists in the world. Even though his teenage years were fretted with frustration and anger due to his unusual condition, he became more tolerant and receptive once he entered adulthood.

Dinklage began his career in 1995 with the film ‘Oblivion’. In the film, he played an actor who was frustrated at being offered only clichéd roles because he happened to be a dwarf.

He starred in the British comedy movie ‘Death at a funeral’ in 2007. The film was a huge success, which led them to remake an American version of it in 2010, in which Dinklage reprised his role.

In 2008, he played the role of a grumpy dwarf named Trumpkin in the sequel of the popular fantasy film series ‘The Chronicles of Narnia: Prince Caspian’.

His big break in television came in the year 2011 when he was selected to play Tyrion Lannister in the medieval-fantasy drama series ‘Game of Thrones’, which is based on George R. R. Martin’s novel series, ‘A Song of Ice and Fire’. His performance also brought along a shower of prestigious awards for him.

In 2014, Dinklage appeared in ‘Knights of Baddassdom’, which was a comedy-horror film. He also played the role of Boliver Trask in the movie ‘X-Men – Days of the future past’. In 2015, he appeared in the film ‘Pixels’.

Here are some of the best highlights of Peter Dinklage’s career:

“I love animals. All animals. I wouldn’t hurt a cat or a dog — or a chicken, or a cow. And I wouldn’t ask someone else to hurt them for me. That’s why I’m a vegetarian.” – Peter Dinklage

“Any swagger is just defense. When you’re reminded so much of who you are by people – not a fame thing, but with my size, constantly, growing up – you just either curl up in a corner in the dark or you wear it proudly, like armor or something. You can turn it on its head and use it yourself before anybody else gets a chance.” – Peter Dinklage

“I was fortunate enough to have an upbringing that made me more accepting of who I am.” – Peter Dinklage

“So I won’t say I’m lucky. I’m fortunate enough to find or attract very talented people. For some reason I found them, and they found me.” – Peter Dinklage

Now that you know all about Peter Dinklage’s net worth, and how he achieved success; let’s take a look at some of the best lessons we can learn from him:

1. Let Them See that Their Words Can Cut You and You’ll Never Be Free of the Mockery

Being a dwarf and a reason for his mother’s death (during delivery) he is often mocked by the names ‘Imp’ and the ‘monster’. Over time he started accepting those names and even starting making fun of the same and that certainly is not the reaction that the other person might be expecting.

When they don’t get what they wanted/expected, then ‘you’ start to play with ‘their’ head.

2. Never Forget What You Are

The rest of the world will not. Wear it like armor, and it can never be used to hurt you. YES! Once you unveil your true self to your conscious mind and accept yourself as you are, nothing can stop you from excelling.

Even if you hide it from yourself, the people around you know your limitations and they will use them against you. ACCEPT YOUR INSECURITIES and ‘wear it like armor’ when you don’t have anything to hide, you can be yourself and do things your way.

3. It’s Hard to Put a Leash On a Dog Once You’ve Put a Crown on Its Head

There are times when you have to pamper certain people to get your work done. You don’t really want them to throw tantrums at you, I mean, Come on! they did a favor for which you are thankful and would return it as and when needed. That is an egalitarian picture that I am painting.

Many times they start dancing on your head and there is nothing that you can do about it. So, it is better than you choose the dog wisely before putting a crown on its head.

How much is Peter Dinklage worth?

Peter Dinklage’s net worth is estimated to be $25 Million.

How old is Peter Dinklage?

How tall is Peter Dinklage?

Peter Dinklage is best recognized by his lead role in the film ‘The Station Agent’ and his portrayal of the character of Tyrion Lannister in the popular television series ‘Game of Thrones’.

He has two Emmys and a Golden Globe to his name for his brilliant performance in the television series.

As of December 2022, Peter Dinklage’s net worth is roughly $25 Million.

What do you think about Peter Dinklage’s net worth? Leave a comment below.