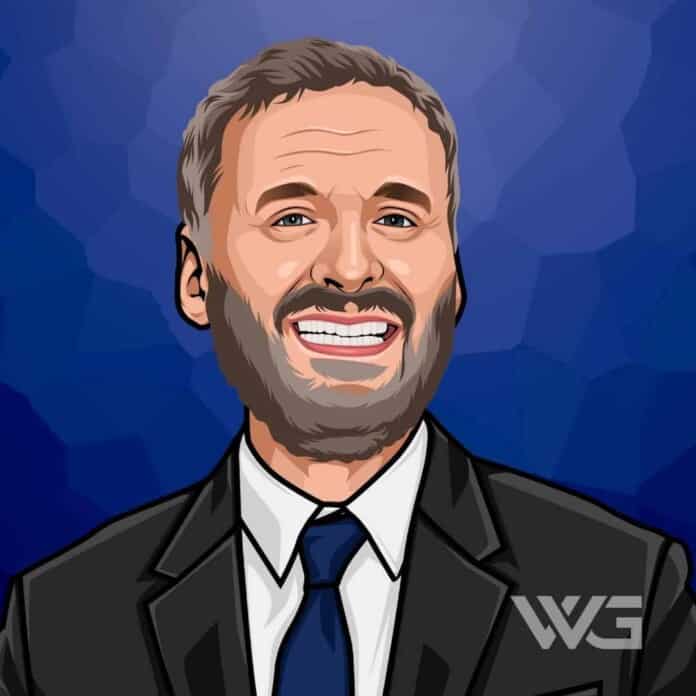 What is Phil Rosenthal’s net worth?

Philip Rosenthal is an American television writer and producer.

Rosenthal is the creator, writer, and executive producer of the sitcom ‘Everybody Loves Raymond’. In recent years, Rosenthal has presented food and travel documentaries ‘I’ll Have What Phil’s Having on PBS’ and ‘Somebody Feed Phil’ on Netflix.

As of February 2023, Philip Rosenthal’s net worth is estimated to be roughly $200 Million.

He graduated from Clarkstown North in 1977. After high school, he attended Hofstra University, from which he graduated in 1981. In the early 1980s, he was an actor based out of New York City before shifting his focus to production work.

Rosenthal’s largest commercial success and the longest-running project was the sitcom ‘Everybody Loves Raymond’. The show was co-produced by Ray Romano. His wife played the role of Amy Amy MacDougall-Barone, the off-and-on girlfriend (wife after season 7) of Robert Barone (Brad Garrett) in the series.

He is the author of the book ‘You’re Lucky You’re Funny: How Life Becomes a Sitcom,’ which was published in 2006. He directed President Bill Clinton in a White House Correspondents’ Dinner video. Rosenthal co-wrote the 9/11 telethon ‘America: A tribute to Heroes’.

Rosenthal wrote and directed a documentary film for Sony Pictures called ‘Exporting Raymond’, which depicts his efforts to adapt Everybody Loves Raymond for Russian television.

In 2015, Rosenthal was one of 98 members of the Los Angeles Jewish community. Later that year, PBS presented the six-episode television series ‘I’ll Have What Phil’s Having’ in which Rosenthal goes to locations around the world to explore their food culture.

After a few episodes, the series was not renewed. In 2018, Netflix premiered a reworked version of the show ‘Somebody Feed Phil’.

As of February 2023, Phil Rosenthal’s net worth is estimated to be roughly $200 Million.

How Does Phil Rosenthal Spend His Money?

Rosenthal owns a beautiful home in Los Angeles, California. He purchased the home in 2005 for approximately $4.685 million. it comes with 11 bedrooms and 7 bathrooms.

Rosenthal and his wife, have made significant philanthropic investments to support efforts to combat food insecurity in communities around the world.

Here are some of the best highlights of Phil Rosenthal’s career:

“The world’s pretty big. I have to see everything, do everything, eat everything. You’ll never be as young as you are right now, so while your legs still work, while you still have the breath in your lungs, go. At the end of our lives, we only regret the things we didn’t do.” – Philip Rosenthal

“I’ve inherited a Jewish sensibility and sense of humor from my parents and all those who came before me. All the Jewish comedians, character actors and writers I was exposed to also reminded me of my family in their sense of humor.” – Philip Rosenthal

“If you’re in the writer’s room, in any writer’s room in the world, before you pitch a joke or suggest an idea, you first think it’s funny and decide to say it out loud. The next step is for the people around you to accept it or reject it, before it ever sees the light of day, on film or in front of an audience.” – Philip Rosenthal

“Takeout is a way to explore different lands and different cultures just by sitting in your home and ordering. I mean, there couldn’t be an easier way to explore and I would advise people in this terrible time that this is a great form of entertainment to experience what’s around you.” – Philip Rosenthal

“The other stuff of marriage can fade a little bit, but as long as you can laugh with your partner, that’s everything because that’s what remains at the end of the day. I think that’s how we pick our friends and that’s how we ultimately pick who we marry.” – Philip Rosenthal

Now that you know all about Alec Benjamin‘s net worth and how he achieved success; let’s take a look at some of the lessons we can learn from him:

Food is the great connector, and laughs are the cement. If we go out to eat and have a nice meal, that’s one thing. If we can share a laugh, now we’re friends.

Because you know what happens when you say ‘hello’ or ‘good morning?’ You make a connection. And isn’t that what being human is all about?

Life is about travel, and the beauty in life, the love we find, the joy we have, the laughs we have together.

How much is Phil Rosenthal worth?

Phil Rosenthal’s net worth is estimated to be $200 Million.

How old is Phil Rosenthal?

How tall is Phil Rosenthal?

Phil Rosenthal is an American television producer and writer. He is best known for creating, writing and executive producing the hit sitcom ‘Everybody Loves Raymond’. The show ran for almost 10 years.

This helped Rosenthal to become a well-known figure within the entertainment industry. Today, he is best known for documentary series such as ‘I’ll Have What Phil’s Having’ and ‘Somebody Feed Phil.’

As of February 2023, Phil Rosenthal’s net worth is estimated to be roughly $200 Million.

What do you think about Phil Rosenthal’s net worth? Leave a comment below.